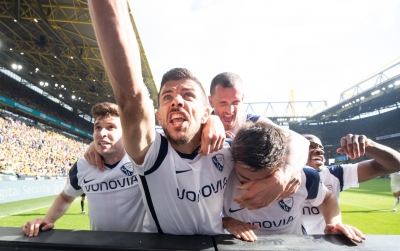 Despite coming back from two goals down thanks to Erling Haaland’s brace, newcomers Bochum won against Borussia Dortmund in the Bundesliga in a 4-3 thriller with two late goals.

Bochum got off to a dream start against Borussia Dortmund on Saturday night, scoring after only three minutes when Takuma Asano’s pinpoint cross into the box found Sebastian Polter, who nodded home from seven metres.

Only moments later, Dortmund had to swallow Bochum’s second goal, as Asano set up Gerrit Holtmann, whose left-footed hammer from the edge of the box beat BVB goalkeeper Marwin Hitz, according to Xinhua. The hosts took some time to recover, but within a half-hour mark, Haaland converted a handball penalty to cut the deficit in half before converting another penalty from the spot.

Haaland didn’t stop there, as he stunned Bochum with his hat-trick in the 62nd minute, thanks to a Marco Reus cutback pass that allowed Haaland to turn the tides from close range.

Bochum, on the other hand, remained unimpressed and responded as well, with joker Jurgen Locadia levelling the scores in the 81st minute before Milos Pantovic made it 4-3 after converting a handball penalty in the 86th minute to secure Dortmund’s first win since 1998.

Stuttgart earned crucial points in the relegation battle with a late 1-1 draw with Wolfsburg.

Cologne extended its winning streak to four games and is eyeing a place in Europe after defeating Augsburg 4-1 thanks to Anthony Modeste’s brace.

Freiburg moved into the top four with a 4-3 win over Hoffenheim.