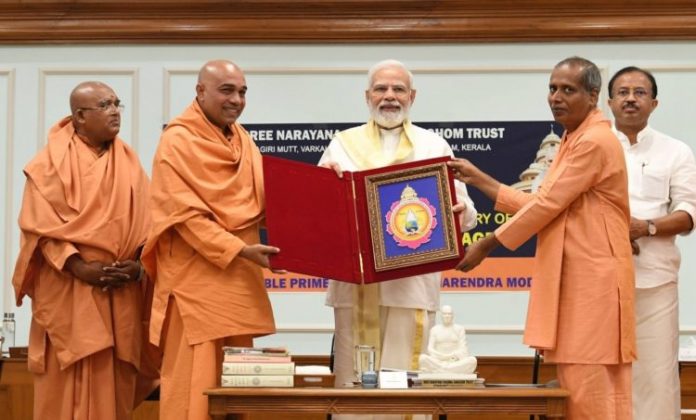 Prime Minister Narendra Modi on Tuesday said that when one walks on the path of reforming society, then a power of self-improvement is also awakened in society.

He was addressing the inaugural ceremony of year-long joint celebrations of the 90th anniversary of Sivagiri Pilgrimage and Golden Jubilee of Brahma Vidhyalaya at his official residence here.

PM Modi also launched the logo for year-long joint celebrations. Apart from the spiritual leaders of Sivagiri Mutt and devotees, Union Ministers Rajeev Chandrasekhar and V. Muraleedharan were among those present on the occasion.

Speaking on the occasion, the Prime Minister noted that “When we walk on this path of reforming the society, then a power of self-improvement is also awakened in the society.”

He gave the example of social adoption of the campaign of “Beti Bachao, Beti Padhao” in recent times where the situation improved with speed as the government was able to create the right environment.

The Prime Minister commented that celebrations of 90th anniversary of Sivagiri Pilgrimage and Golden Jubilee of Brahma Vidhyalaya are not confined to the journey of these institutions but this is also the immortal journey of that idea of India, which keeps moving forward through different mediums in different periods.

“Be it the city of Shiva in Varanasi or Shivagiri in Varkala, every centre of India’s energy holds a special place in the lives of all of us Indians. These places are not mere pilgrimages, they are not just centres of faith, they are awakened establishments of the spirit of ‘Ek Bharat, Shreshtha Bharat’,” he said.

The Prime Minister pointed out that while many countries and civilisations strayed from their ‘dharma’ and materialism took the place of spiritualism, in India the sages and Gurus always refined the thoughts and enhanced people’s behaviour.

He recalled the Uttarakhand-Kedarnath tragedy when despite having Congress government at the centre and a Defence Minister from Kerala, he, as Chief Minister of Gujarat was asked to help Sivagiri Mutt saints by the Mutt. The Prime Minister said that he will never forget this privilege.

PM Modi said that Shri Narayan Guru talked of modernity but he also enriched Indian culture, values and campaigned against stereotypes and evils and made India aware of its reality.

“Today, with the same inspiration of Narayan Guru Ji, the country is serving the poor, downtrodden, backward, giving them their rights. The country is moving with the mantra of Sabka Saath, Sabka Vikas, Sabka Vishwas and Sabka Prayas,” he said.

Calling Shri Narayan Guru a radical thinker and a practical reformer, the Prime Minister said that the Guru Ji always followed the decorum of discussion and always tried to understand the viewpoint of the other and tried to convey his viewpoint collaboratively by working with the other person.

“As Indians, we have only one caste i.e. Indianness. We have only one religion – the dharma of service and duty. We have only one god – Mother India. Shri Narayan Guru’s exhortation of ‘One Caste, One Religion, One God’ gives a spiritual dimension to our patriotism. We all know that no goal of the world is impossible for the united Indians,” he said.

Against the backdrop of Azadi ka Amrit Mahotsav, the Prime Minister said: “Our freedom struggle was never confined to the expression of protest and political strategies. While it was a fight to break the chains of slavery, it was informed by the vision of how we will be as an independent country as, only what we are opposed to is not important, it what we stand for is more important.”