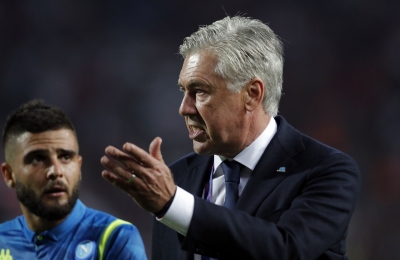 Real Madrid manager Carlo Ancelotti said he was a “bit frustrated” with the way his team played in the first half of the UEFA Champions League semifinal first-leg against Manchester City at the Etihad, losing 3-4 in a thriller on Tuesday night.

He told Real’s fans to be ready for the return leg at Bernabeu in eight days’ time, asking them to demand a better performance from the players on home turf.

Pep Guardiola’s City will take a slender one-goal lead into the semifinal second-leg, and will be buoyed by the fact that it held a two-goal advantage on three separate occasions, but were pegged back each time by Real who refused to buckle on an enthralling night.

“I’m a bit frustrated because we came second best in many of our individual duels in the first half and they (City) scored two goals that we could have avoided had we been paying attention. We managed to produce a reaction and keep the game alive ahead of the return leg. It’s a defeat that keeps us in the tie ahead of the second match at the Bernabeu. We’ve got to improve defensively because we’ve got the quality up top to pose them problems in the return leg,” said Ancelotti pot-match.

“I get the feeling that we started the game very poorly. We were too soft and ended up conceding two goals. The team then showed its ability to produce a reaction. We competed and were in the game right up until the end. We have to improve defensively. We did well in possession and created goal-scoring opportunities. It’ll be really important that we improve defensively in the return leg. I’ve got a very experienced team that keep their cool when the going gets tough. They’ve played many games like this and never give in and always keep their heads up,” opined the manager on realmarid.com.

The Italian admitted that City had a one-goal advantage going in the return leg and fans could make a difference to the game by egging on the team in Bernabeu.

“City have the advantage and you’ve got to take that into account. I hope that our fans demand a better performance from us to reach the final. Our fans have to be ready for the return leg because we’re going to fight to make it another magical night,” he said.

“Karim (Benzema) played really well, as he always does. He’s shown great character to take the penalty and he scored it spectacularly. I was surprised he took it that way. (Luka) Modric also had a great game, but I took him off because I thought a fresher player could give us more for the last ten minutes. Modric was spectacular and I brought on Ceballos, who also showed real character,” added Ancelotti.