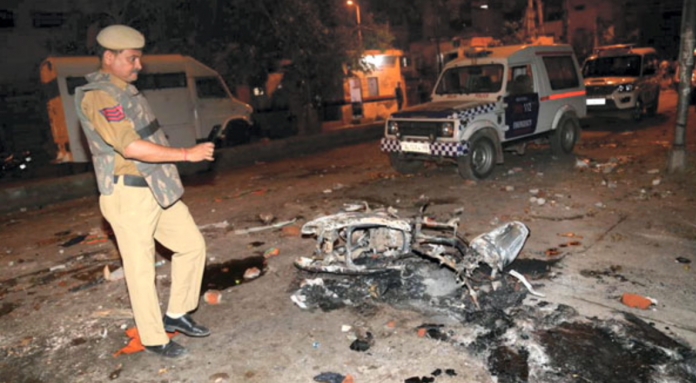 India is currently witnessing the most heinous and sordid ideology which is infamously known for its sanguinary penchant for violence and disturbance in the society only for political and religious hatred towards one particular religion. It’s quite detrimental to see such a terrifying situation right now which is extremely flabbergasting every citizen in the country. Now whenever violence erupts in the country, it doesn’t happen spontaneously, instead it’s planned by jihadists living secretly in the guise of Indian citizens, the politicians sitting in cozy couches and the ones who are hidden as journalists. We all must peruse how riots are planned by them to target Hindus maliciously, and meticulously rummage through the chronology to understand how hatred against Hindus is spread under the covers of terrorists wearing an attire of secularism.

Since independence, Hindus were dragooned to suffer for the secularism of India and the ideologies which were born to bewilder Hindus and mentally trained to endure pain and violence as they are only vouched for maintaining peace of this country. Minorities in India have been presented as scared, and underprivileged, but in sooth, they have been given privileges to choose terrorism to wipe out non Muslims from Kashmir, still no body can question them about their hatred. These are a few perks of Muslims in India. And this hatred is excessively fueled by radical Islamists in the religious institutions run by govts, and rest of the work is done by jihadists in the garb of activists who feign secularism and exhibit their hypocrisy as liberalism.

Recently, a flummoxing propaganda was accidentally divulged by a Maulvi on a debate after Ram Navami violence that says, ‘the time to ban Ram in India has come’. Consequently, attacks on Ram Navami and other Hindu processions have been chronologically planned and this agenda against shri Ram was exposed. Although this seems to be new lousy propaganda, but it is being routinely practiced by Muslim community since the decline of Islamic rule. On the contrary, Hindus are made to feel guilty for opposing this attempt, let alone taking any action. Thus, hatred for Hindus is brazenly shown on the roads in the form of a protest against the govt by secular lobbies and vile journalists lionize this hatred for their rancor. From targeting Hindu festivals through advertisements to stone pelting them for celebrating their festivals, this mentality has wildly spread in the country which can be convincingly proved by recent incidents happened in the country on Ram Navami and hanuman Jamotsav.

Ironically, Hindus are referred as intolerant by liberals which is ridiculously absurd. However, this kind of attempt is actually made just to instill a piercing guilt in Hindus and hatred in Muslims for Hindus. Which is why currently secular lobbies campaign for making Hindus more secular by inspiring them to attend Eid and other festivals wearing caps and all to present themselves as branded secular but never lecture secularism to Muslims as they are allergic to this sophistry. This is why five times namaz on loudspeakers gladden seculars, but Hanuman chalisa on loudspeakers terrifies them.

These Incessant attempts of seculars and liberals tarnishing the religious glory of Hindus make Muslims feel condescending, and they fail to fight the urges of scoffing Hindus on this account which leads to clashes between two communities. Now this happens everyday. A Hindu can’t slogan Jai shri Ram in the area where Muslims live, but Muslims can shout Allah is the only God five times a day. This unbelievable intolerance of Muslims towards Hindus is alarming as nobody will talk about it, as secularism can’t allow this. Moreover, after every violence, this intolerance is not strongly condemned, instead it is promoted openly by liberal lobbies to let Hindus face horror for voting for a leader whom they abhor. What Kashmir had seen decades ago, and still having those scars of terror, has started in all states.

For a riot, planning is patently a basic need which was proved in Delhi riots 2020 as to how weapons, bombs, and other necessities were provided to rioters. The ground management is actually a circle of events which are planned by perverted minds of hidden jihadists sitting in high posts and the toolkit is secretly sent to the ground players who are insanely prepared to carry out any operation against the ones they have been taught to hate. Like it happened on Hanuman Jamotsav at Jahangirpuri in Delhi, the area is considered to be a hub of illegal immigrants.

In a viral video, a girl in hijab is seen telling a reporter that Muslims can’t tolerate the name of Shri Ram playing on the DJs in Muslim dominated areas, it clearly refutes all the secular lies hypocrite politicians feed Hindus along with their secular lobbies who help them get Muslim votes. This unerring hatred for shri Ram is unfathomable, which provokes Muslims to attack Hindus, injure cops, and brandish swords to orchestrate terror in the country which they think is not secular where other religions can be glorified or celebrated.

The fear of law and order doesn’t even linger on their shoulders when they wield swords and guns and shoot cops and Hindus as they are aware of the fact that they have an army of hypocrites to whitewash their sins and label them victims afterwards, smashing all the allegations against them. All the new ways of violence including stone pelting are actually admired by liberals when they see Hindus and cops being injured in the pre-planned clash. Stone pelting is a well known Islamic practice which is so alluring that it has been adopted by Muslims living in India as well. Kashmir was notoriously known for this, and now this is being practiced in all parts of India. And this is undoubtedly an unidentified threat to the peace of this country which anti India elements don’t want us to contemplate.

After the violence, when all the fingers point out Muslim hatred towards Hindus and expose their uncontrollable propensity for violence and rumpus. Secular lobbies who don’t speak for the injured Hindus and cops until Muslims are blamed immensely for the violence for disturbing Hindu celebrations. Lobbies play cleverly to make Muslims look terrified despite no injury or killing in the violence, and pour the entire responsibility on Hindus for the violence as their support for Muslims is clear and tilts to one community.

Ignoring all the vile attempts of jihadists to disrupt the harmony of the country, they use the victim card to insinuate that Muslims suffer from violence, even they blame Hindutva for provoking Muslims to pick up guns and attack them because they are scared. They are forced to attack. However, they never talk about hatred which is deeply rooted in Muslim community for Hindus. The victim card is so powerful as it works every where. It has a special quality which makes the victims look oppressors and make jihadists scared fellows who are known for attacking Hindus for practicing their Dharma, however question this mentality is unerringly known as islamophobia. That’s why politicians and pseudo liberals avoid taking any risk which can snatch the certificate of secularism from them.

Types of political reactions after a riot –

Politicians relying on Muslim vote bank prefer not to speak when violence is started by a so-called community which they pander for being fearless rioters in the country. Which is why recent attacks on Hindus on Hindu festivals have not managed to hit a fragile nerve of these politicians as the screams of Hindus and police don’t seem awful to them. But a sigh of a Muslim can make them quiver for days and they yell against Hindus, deliberately calumniating Hinduism to entice Hindus and blandish jihadists.

During Delhi riots CM kejriwal with his leaders fulminated against Hindus, targeting them with some references of Ramayana and other Hindu scriptures. Ironically, his Muslim leader was eventually arrested for fueling the riots in Delhi. What happened in Delhi on Hanuman Jamotsav, has horribly fuddled him as to how he can speak against his Vote bank, therefore he behaved innocently which coherently seems awry on his cunning face, and then appealed for peace without condemning the jihadists and what is more hilarious, is how easily he forgot to mention a holy book to remind jihadists of what he wanted Hindus to remember when truth of Delhi riots wasn’t unearthed.

This hypocrite mien of such injurious politicians is a deep-seated belief of jihadists which proffers them a sense of sheer fearlessness. As democracy in Delhi is truly a kaleidoscope of chaos and cajolement. This selective outrage against one religion to outvie for being branded secular is a new definition of Indian politics. Using hindu identity to ascribe Hindutva ideology for any violence and chaotic environment which simply doesn’t have anything to do with Hindus, is a prevalent maneuver politicians choose.

This cancerous mentality is seriously prophesizing the future of Hindus, reminding us of unfortunate plight of Kashmiri Hindus in Kashmir when terror sprouted in the valley from the stone pelting which gradually turned into swords, guns, and saws with jihadi slogans.