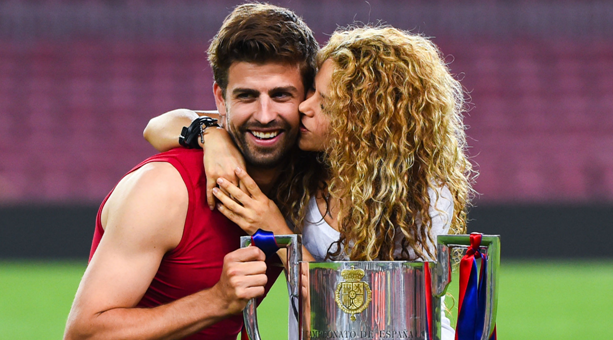 For the most part, the lives of professional athletes consist of endless competition and training. With such a busy schedule, it is not easy to make time for romance and even more so to build a long-term relationship. But these star couples managed to do it.

For over a decade, every year on February 2, Spanish footballer Gerard Pique, one of the best defenders in the history of Barcelona, and the irresistible Colombian singer Shakira celebrate a double birthday. They were born on the same day exactly ten years apart.

The future spouses met on the set of Shakira’s music video for the song Waka Waka (This Time For Africa), which became the official anthem of the 2010 FIFA World Cup, where Pique participated in the filming.

The successful football player charmed the singer so much that she even left her lover Antonio de la Rua, an affair that lasted for 11 years. The relationship between Shakira and Gerard became known in 2011, two years later they had their first child, Milan, and in 2015, their second son, Sasha. But it seems that they are not going to stop there: the lovers claim that they are ready to raise at least six more children.

Shakira is the main fan of the Catalan’s talent. After Barcelona’s recent victory over Real Madrid (4:0), the artist once again called Piqué the best player in the world. The player’s wife believes that even in this difficult season, Barcelona will win La Liga, although, judging by the odds, the bookmakers at the website Bookmaker-ratings.in do not agree with her.

The Beckhams are not only one of the most beautiful and romantic couples in the world of sports, but also an example to follow. The couple celebrated their wedding in July 1999: during this time, their family had four children. The eldest son Brooklyn is already 23 years old, and the youngest daughter Harper is 10 years old.

Victoria, at that time the lead singer of the Spice Girls, met the outstanding Manchester United player at one of his matches. After meeting with David in the under-tribune room after the game, the girl gave him her ticket, writing her phone number on the back. Beckham keeps it to this day.

There are good couples in the martial arts world too. One of them is former UFC fighters Ronda Rousey and Travis Browne, who met in 2014 at joint training in California. In 2017, on vacation in New Zealand, Travis knelt in front of Ronda and proposed to her in front of a picturesque waterfall.

The couple did not want a lavish wedding with a bunch of flowers and entourage, and held a quiet ceremony in the heavyweight’s homeland of Hawaii. Already in 2021, the couple became the parents of a girl, calling her an unusual name – La’Akea Makalapuaokalanipo.

Norwegian biathlete, eight-time Olympic champion Ole Einar Bjørndalen and Belarusian four-time Olympic biathlon champion Darya Domracheva can be considered the most secretive and mysterious couple. The biathletes met in 2012 and the couple did not officially declare their relationship until 2016.

In the same 2016, Ole Einar and Daria played a wedding, about which little is known either: neither the the guests, nor the venue. However, the fusion of the two cultures went perfectly. Ole Einar speaks warmly about Belarus, its cuisine and especially the cleanliness of Minsk. And Daria fell in love with Norway with its unique northern flavor.