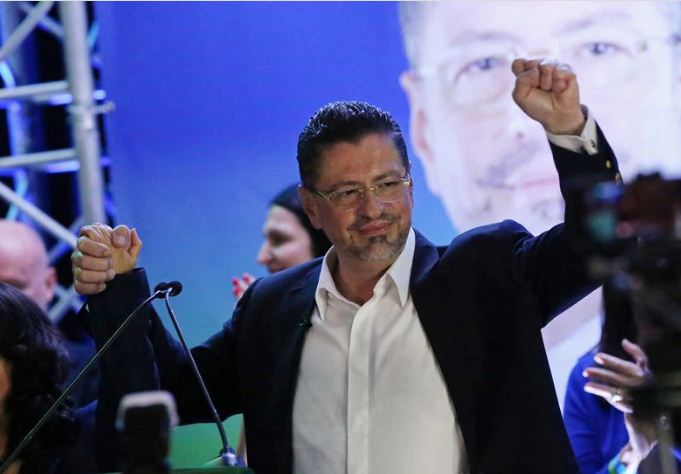 Economist Rodrigo Chaves extended a hand to the opposition upon winning the Costa Rican presidency on Sunday after a bruising election campaign in which the former World Bank official vowed to break with traditional politics.

Defeating former president Jose Maria Figueres by about 53% to 47% in a run-off vote, according to preliminary results, the bearded 60-year-old Chaves quickly dropped his confrontational campaign rhetoric and said it was time to work together.

“Tonight, let’s set aside the party colors that can easily divide us,” Chaves, told dozens of cheering supporters in the capital, San Jose, on Sunday night. “I humbly ask you that we unite beneath the blue, white and red of our national flag.”

Chaves will take office next month with his Social Democratic Progress Party (PPSD) holding just 10 of the national parliament’s 57 seats, while the party of Figueres, who came first in an indecisive first round vote in February, has 19.

At 57%, turnout was the lowest in decades, reflecting apathy among many voters in Costa Rica, where straitened economic times have fueled disenchantment with the political class.

Chaves, whose campaign was buffeted by allegations of sexual harassment stemming from his time at the World Bank, had vowed to use referenda to work around parliament, and also pledged to help the poor by keeping down the price of basic goods.

He has repeatedly denied the harassment allegations. But his policies, combative style and confrontational approach to the media drew comparisons to other anti-establishment leaders in the Americas, including former U.S. president Donald Trump.

A few dozen of Chaves’ supporters gathered for a modest but lively watch party at a downtown hotel. Dancing began before the results and the festivities continued after his speech.

Caravans of revelers celebrating Chaves’ victory honked their car horns as they passed the hotel where Figueres’ supporters had gathered. Inside, the mood was somber and party flags were lowered immediately after Figueres conceded.

In the end, a belief that Chaves could deliver a fresh start for Costa Ricans proved decisive in seeing off the challenge of Figueres, who was president from 1994-1998 and is a scion of one of the most powerful political families in the country.

Adrian Salazar, 57, and his family were among the Chaves supporters celebrating in the streets of central San Jose.

“I voted thinking we weren’t going to win, but confident that we need new faces to save the country,” said Salazar, attributing the triumph to a “hunger for real change.”

Still, in his victory address, Chaves namechecked Figueres’ father, three-time president Jose Figueres Ferrer, as he sought to win over opponents to help him govern.

Chaves spent almost three decades at the World Bank, and is not a complete newcomer to politics. He briefly served as finance minister under outgoing president Carlos Alvarado, who is barred by law from seeking immediate re-election.

Chaves sought to underline his economic credentials in his campaign pitch to Costa Ricans, who over the past two decades have seen unemployment steadily creep up, inequality rise and the country slip deeper into debt during the COVID-19 pandemic.

In January 2021, the country agreed to $1.78 billion in financial assistance from the International Monetary Fund.

In exchange, the government vowed to adopt a raft of fiscal changes and austerity measures to stabilize finances. But the fragmented parliament has so far made little headway on them.