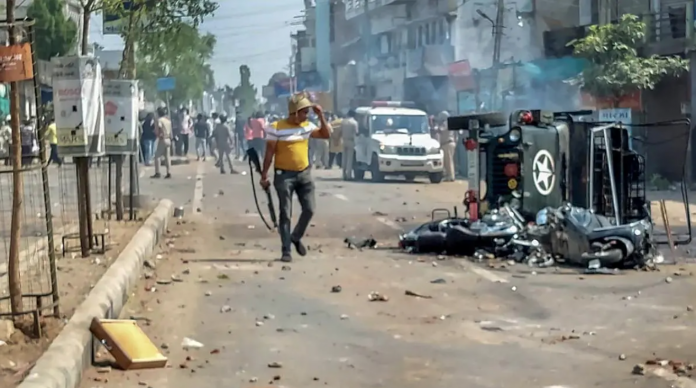 On the occasion of Ram Navami, Hindu community across the nation planned excitingly to celebrate it with full enthusiasm and fervent almost in all states. The saffron flags with Jai Shri Ram emblazoned on them, saffron clothes and scarfs created an ambience of divinity. To make it memorable, Hindu Groups solely planned to hold saffron rallies in all parts of India, demonstrating the glory of Hinduism and instill a sense of proud in Hindu youths for following the Dharma unapologetically. Although, in some parts of west Bengal, where secularism has powerfully hijacked a large part of Hindus who think saffron rallies are just a political agenda to create disharmony, communal clashes have been reported, yet jihadi mob couldn’t stop Hindus from celebrating Ram Navami. Stone pelting, torching vehicles happened by mob, but none of this could dim the alacrity of Hindus for their faith.

India, a secular country, where many religions are practiced by different communities. They have been given religious rights to practice their faith and hold cultural rallies to celebrate their faith without any kind of disharmony by another community. However, these rights are only for some privileged community, not Hindu community. In this secular country, Hindus are abused for chanting Jai shri Ram, attacked for celebrating their nav varsh, mocked for their festivals, and this hatred is called secularism.

In a span of few weeks, several cases of communal clashes have been reported in Rajasthan, Bengal, and other states. Where Hindu rallies were attacked by Muslim mob, while going through Muslim dominated areas. The story remains the same on Ram Navami celebrations. In Gujarat, Madhya Pradesh, Jharkhand, and west Bengal, Hindus have witness terrifying communal violence where privileged Muslim mob pelted stones on Hindus going through their areas, and torched the vehicles without any fear, demonstrating their Hinduphobia violently. All it happened in secular India. What’s more painful is, nobody is going to talk about these attacks, as we have been continuously taught to remain silent as speaking against these habitual attacks of radical Muslims can hurt secular sentiments of politicians and liberals who celebrate such violence. They would have wailed for weeks, if any such communal clash happened on Muharram or Eid, accusing and abusing Hindus without any reason.

These attacks are clearly insinuating the emerging hinduphobia amongst Muslim community which is excessively provoking them to adopt the prevalent practice of Kashmiri stone pelters  in order to instill a fear in Hindus, so that Hindus can’t think of celebrating their faith which is not acceptable to this privileged community. It might be flabbergasting why it is happening in secular India? We can wonder why it is happening now, as we have been mentally trained to wonder. Before 2014, Hindu community was too blind to question as secularism and a guilt for Dharma was deeply planted which was eradicated by awakening Hindutva ideology. Therefore, to paralyze this spirit of Hindus for Dharma, they are brazenly lurking to create a ruckus in Hindu festivals, and exhibit their hatred for Hinduism, as they know the political parties which rely on them for votes, can’t question their actions, and this Hinduphobia won’t even discussed on debates because even lynching, raping Hindus be it Kashmir or Bengal isn’t a big news in this secular India, let alone communal attacks on Hindus. This factor works well for them, since it has worked for Kashmiri terrorists for 30 years.

Hinduphobia is spreading rapidly which can be proven by recent incidents of Muslims disturbing Hindu celebrations, and evincing their desires to rape Hindu girls and kill Hindus on Instagram live. And the root of these hateful mentality is this hatred which jihadists inject in Muslim youths for Hindus. However, nobody can be seen talking about hinduphobia. Surprisingly, it’s because Indian secularism says talking about violence orchestrated by Muslims, hate speech of Muslims is called islamophobia. Hinduphobia is a strong force emanated from hatred for Hindus which is vehemently produced by political parties and secular lobbies for their personal benefits and agenda against India.

One of the main cause of hinduphobia is, the evolving Hindutva ideology which has thwarted sordid attempts of political parties and lobbies who work with jihadists against India and Hindus. Hindutva has emerged powerfully and spread faster than ever once Pm Modi snatched power.  Subsequently, all those amusing games of liberal lobbies and politicians to insult Hindus, and culture through art, comedy and politics have been stopped as Hindutva has taught Hindus to oppose this and remonstrate. Consequently, all the offenders who mocked Hinduism were coerced to face the music legally. This is irking them uncontrollably. So, utilizing violence to tackle the emerging Hindutva which can be pernicious for their ideology, is the last option they think they have. Which is why all Hindu festivals witness uproar and disharmony in different forms. These lobbies have connived with jihadists to do anything to disrupt harmony fearlessly, as they are well prepared to whitewash the violence and vociferate against Hindus if they questioned this secretly thriving hinduphobia.

They know Hindus are being unapologetic about their Dharma, and Hindutva is making them defiant against the anti Hindu elements that’s quite detrimental for these lobbies who claim to be unbiasedly secular. Hinduphobia is a last shelter they have to survive.

I am saddened to say how we can call India secular if secularism doesn’t allow Hindus to celebrate their faith without violence from other community? If Muslims can celebrate Eid, wield weapons in rally on Muharram, then why they attack Hindus for celebrating their festivals? A litany of questions can be raised, but who will answer, is actually another question!

What’s more perplexing is, if they are attempting to stop Hindus from celebrating their faith when they are a minority, what will they do if Hindus become minority in India? To know the answer, one must know about Pakistani and Bangladeshi Hindus and their plight of struggling to survive amongst Muslims.

stone pelting is fervently becoming new cultural symbol of Muslims to showcase their hatred for Hindus because this has certainly helped jihadists coerce Hindus to flee Kashmir which can surely be used again for another agenda like Kashmir.

Hindus must interpret this harsh reality that Bhaichara they talk about, is a beautifully designed snare for them. If it existed, then they wouldn’t have attacked Hindus in Gujarat where Hindus offered them to break their fast in temples. If it existed, they wouldn’t have pelted stones on Hindus celebrating Hindu infront of a mosque. Abandoning secularism and standing against these perpetual violent demeanor of Muslims is a need of the hour. Since they want to terrify Hindus that they will fear entering Muslim dominated areas. This fear is created with violence. And violence is their favorite weapon. Hindus must be prepared for more violent incidents if they don’t acquiesce and keep on following the Dharma unapologetically which is ridiculously averse to secularism. Hence, Hindus are required now to think of comprehending the complete injunction of Hindu Dharma that says,“ Nonviolence is the ultimate dharma, so too is violence in service of Dharma”.