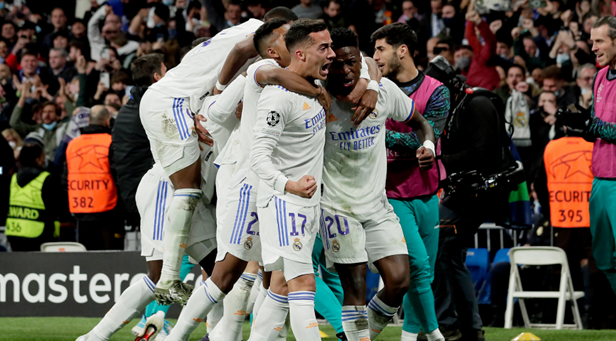 Real Madrid and Chelsea did something in the second leg of the ¼ League of Champions, for what many people love football. Not a single fan could look away from the TV screen. After an embarrassing 3-1 defeat in London, the Blues narrowly missed out on reaching the semi-finals, but Real Madrid proved they rightfully held the Champions League record.

Once again in their history, the Royal Club reached the semi-finals of the Champions League, where they are to face Pep Guardiola’s Manchester City, and another Spanish team, Villarreal, is to play Liverpool. If you want to bet on the outcomes of these matches, you can choose a suitable bookmaker at https://bookmaker-ratings.com/.

After the defeat of Chelsea in the first leg of the Champions League quarter-finals, Thomas Tuchel bluntly said that the outcome of the confrontation was a foregone conclusion, and admitted that he had made a mistake in his tactical decisions, leaving Andreas Christensen face to face with Vinicius without a safety net, since Rhys James was located very high.

Of course, even after these words, no one thought that he and his wards were going to surrender without a fight, and they arrived at the Santiago Bernabeu with an updated game plan. Christensen was replaced by James at right center-back while Ruben Loftus-Cheek acted as a right wingback.

However, Chelsea’s defensive setup was not that easy, as Loftus-Cheek had a hybrid role that consisted of head-to-head against Toni Kroos.

This meant that Chelsea’s two central midfielders only had one direct opponent to worry about in the person of Luka Modric, as Casemiro was positioned quite deep. Chelsea’s free midfielder was able to control Benzema’s moves and limit his threat.

More important defensive responsibility fell on James, who had to act personally on Vinicius.

And the Englishman brilliantly coped with his task, although he received a yellow card already at 10 minutes for a foul on the Brazilian striker. For 115 minutes, the winger scored only one key pass and zero in the shots on the goal column.

James and Loftus-Cheek also had unexpected roles, with the former pulling hard to the right but staying fairly deep in the backline to minimize the space for Vinicius in the event of counterattacks.

Loftus-Cheek, in turn, could operate more widely in possession, often taking positions in the right half-space or even in midfield. Proof of this can be seen in the first goal scored, when the 26-year-old Englishman gave a pre-goal pass, moving to the left half-wing.

With 15 minutes left in normal time, it seemed that Chelsea were in complete control of the situation: they were leading in the score and outplaying the opponent tactically. However, Real Madrid often lacks individual skills to get the desired result. It was it that helped the Creamy when the Croatian midfielder Luka Modric gave a brilliant pass to Rodrigo.

Chelsea missed a couple of decent chances before the end of regular time, so the game went into extra time. And Real Madrid again swept away the opponent with individual skill in the face of Camavinga, Vinicius, and Benzema.

The Camavinga factor was decisive, although the guy is only 19 years old. He endowed the midfield with incredible drive, strength, and physicality. He “untied the hands” of Modric.

“Real” completed the meeting with the following line of defense: Lucas Vazquez – Carvajal – Alaba – Marcelo. Even the most inexplicable worked. This also included the output of midfielder Dani Ceballos for the last 5 minutes. Ancelotti, at such a crucial moment, used a footballer who had spent about 100 minutes on the field in all tournaments in the whole season wearing a creamy T-shirt.

Looking at the statistics of shots, you can see that the match was a complete failure for Real Madrid, but the individual skill of its players has once again secured the club a place in the Champions League.