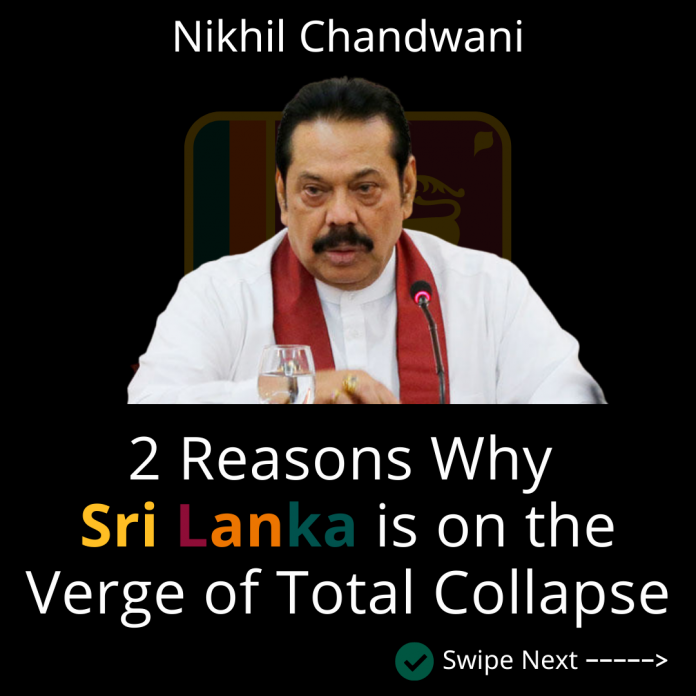 Sri Lanka has deployed troops at fuel stations as demonstrations have erupted across the island nation over serious shortages. Motorists have had to deal with long queues daily to fill their tanks as the country has been facing a severe fuel shortage. And this is just one of the many issues plaguing the nation. Sri Lanka is in the grip of a full-scale economic breakdown.

Rising prices and the nation’s debt crisis have turned the situation extremely grim. There have been extreme food shortages as private banks have run out of foreign exchange to finance imports.

Why is Sri Lanka in Trouble?

With tourism hit by the pandemic, the economic structure of Sri Lanka, which was already staggering under the heavy burden of loans, crumbled. A significant part of this debt was owed to China, accounting for nearly USD 8 billion.

Notably, in 2021-22, Colombo’s debt repayment to Beijing amounted to nearly USD 2 billion. Further, Hambantota port has already been leased out to China for 99 years against USD 1.2 billion.

As a result of its dying financial situation, Sri Lanka had to hand over control of the Hambantota port constructed in the southern part of the nation to China for 99 years as part of the loan repayment process. The port was built using Chinese money and was seen as an undeserved expense, especially given the dire straits of the Sri Lankan economy.

The deeply pro-China Rajapaksa government dug its own grave as it had booted out the Millennium Challenge Corporation (MCC) of the USA with its offer to extend developmental assistance grant to Colombo as the Board of Directors of MCC discontinued its USD 480 million contract with Sri Lanka in December 2020 “due to lack of partner country engagement.

Pakistan understood this, and that’s why they’re throwing out pro-Chinese Imran Khan.

Populist initiatives and freebies promised by Srilankan politicians have also added to the decaying economic situation.

Continuous discrimination and violent persecution against Sri Lankan Tamils resulted in a massive decrease in the Tamil Hindu Srilankan Population. Hindu Tamilians have fallen from 21% to 12.6% on the island due to decades of racial discrimination and targeted violence.

The main brain behind the island’s economy, the Hindus, became refugees and asylum-seekers after facing decades of brutality. The exodus of the island’s brain resulted in Sri Lanka’s overdependence on other nations like China. China exploited this by giving out loans under strict conditions, and now Sri Lankans are trapped. China is taking over their ports, they’ve to repay a considerable amount back to China within a stipulated time, and the government has no funds left to buy foreign currency to purchase oil and other necessary things.