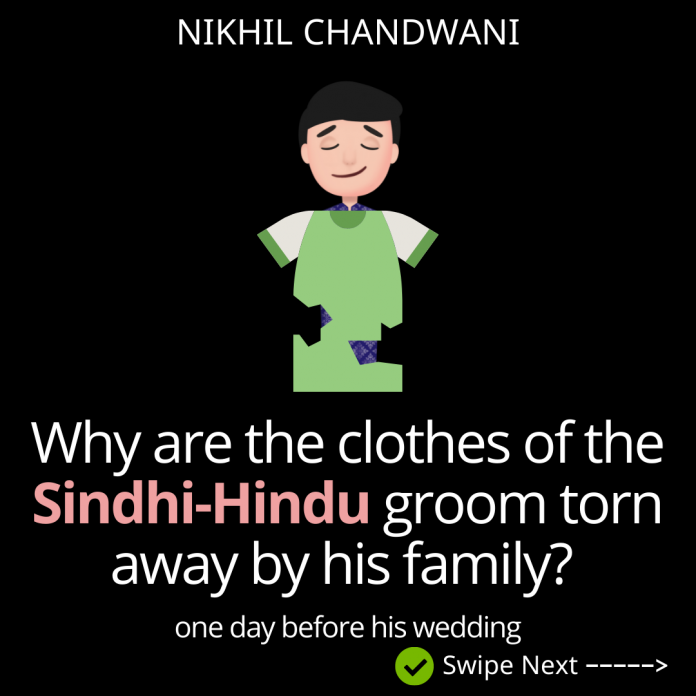 A ritual is a sequence of activities involving words, gestures, objects, or actions performed according to a set sequence. Rituals may be specified by the traditions of a community. In Hinduism, every ritual has a deep-rooted meaning, and today we will explore a very distinct marriage ritual followed by Sindhi-Hindus.

Sindh, the state that gave Hind her name, was one of the world’s first inhabited regions. It embraced Hinduism thousands of years ago, and until the 8th Century, it held a peaceful Hindu civilization that flourished in trade, arts, and science. In the last thousand years, multiple invasions, forced conversion & occupation meant Hindus of Sindh had to move elsewhere. So, during the partition of 1947, most of the Hindus from Sindh moved to India. Sindhi-Hindus brought with them delicious food preparation techniques and interesting culture.

Why are the clothes of the Sindhi-Hindu groom torn away by his family one day before his wedding?

The ritual is called ‘Saanth (Sainth).’ This is genuinely the most distinct and one of the oldest rituals in Hinduism, followed by Sindhis. Bachelor life is a time when a boy has nobody to keep him from living like a pig as he has no ‘someone special’ in life. The night before the wedding, the groom is doused with oil by the married women of the family, after which his clothes are torn away to symbolize him leaving behind his single life to get married. It is a symbolic gesture to ward off the evil, delete his bachelor status and prepare the groom for his married journey. When the snakes grow, they shed their skin to allow for further growth and remove parasites attached to their old skin. Similarly, the groom’s clothes are torn to remove his bachelor past the night before his wedding.

The ritual, Saanth (Sainth), has a beautiful history linked to it. Back in the day when Sindhis were trading with Romans (1500-2000 years ago), the bachelor men had a dress code that they unofficially followed. When they came back from their trade expeditions, bachelors would wear this unofficial uniform indicating they were eligible bachelors. So, when they would find a bride to marry, they were not bachelors anymore, and their bachelor clothes were torn off to indicate their new relationship.