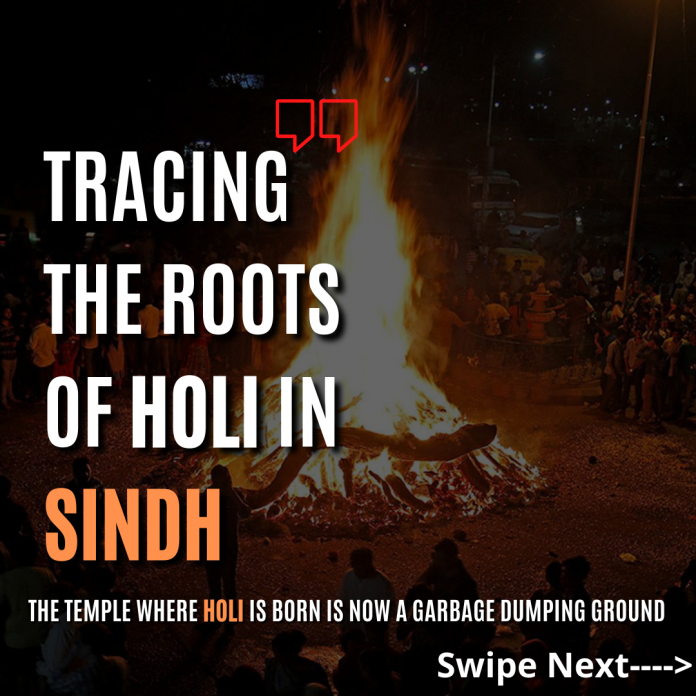 One of the world’s oldest festivals, Holi has united Hindus for thousands of years like none other. The Festival of Love, the Festival of Colours, and the Festival of Spring, Holi signifies the triumph of good over evil, as it celebrates the victory of Bhagwan Vishnu as Narasimha Narayana over Hiranyakashipu.

Thousands of years ago, to shield the earth from the captivity of demon Hiranyaksha, Bhagwan Vishnu had arrived in the avatar (incarnation) Varaha (boar) form and slaughtered him. Hiranyakashipu, the Elder brother of Hiranyaksha, wanted to take revenge on the devotees, particularly on Bhagwan Vishnu. He wanted to become the master of all three worlds -Heaven, Earth & Pathala. However, Hiranyakashipu’s son was a devotee of Bhagwan Vishnu, which humiliated him.

Hiranyakashipu was terribly angry at his son for worshipping his mortal enemy, Vishnu, and upset at his devotion. He eventually decided that he must kill him. The demons tried to use their illusionary forces on Prahlad but none of their powers could stand before him. He tried to control Prahlad against Bhagwan Vishnu but failed, and Prahlad was still as devoted as ever. He ordered him to be crushed underfoot by an elephant. The enraged elephant was unable to crush the body. They threw him over a precipice, but, as Bhagwan Vishnu resided in the heart of Prahlada, he came down upon the earth as gently as a flower drops upon the grass. They tried starvation, Poison, throwing into a well, enchantments, and other measures on the child one after another, but to no purpose. They failed in all their attempts because Lord Vishnu was protecting his devotee.

The king called his demoness sister, Holika, for help as a last hope. Holika has a distinctive cloak that prevented her from being harmed by fire when worn.

The story of Hiranyakashipu mentions that a pyre was lit up, and Holika wearing her distinctive cloak, sat on it, holding Prahalad. Yet, Prahalad emerged unharmed by the fire at the end, and Holika, the demon, was burned to ashes. The intense devotion and complete submission to Bhagwan Vishnu saved Prahlad. Thus was the triumph of Prahlad, the illustration of a good, honest spirit. Hiranyakashipu was devastated beyond repair. Hindus celebrate this victory of truth over evil as Holi.

The Vedic significance of Holi can be co-related to its physical and metaphysical consciences within the boundaries of space, time, life, and karma here on earth. Astrologically, therefore, Holi is a time for us all to remove from our lives any negative thought, feeling or energy into the pyre of the flame of holi.

However, do you know you can find the roots of Holi in a forgotten state?

Long Before Heros with capes and Sindhis with skullcaps, Sindh, under Akhand Bharat, was the world capital of culture, history, and tradition. Located in Modern Day Punjab Province in Pakistan, this ancient place has given birth to numerous thousand-year-old practices in beautiful temple structures.

Multan, formerly known as Kasyapa-pura(city of Kashyapa), hosts a beautiful Prahladpuri Temple, where Holi originated thousands of years ago. Bhakta Prahalad himself built this temple. Yes, there’s a temple in Sindh (modern-day Multan-Punjab-Pakistan) that has given birth to the festival of Holi. The festival of Holika Dahan is assumed to have started there. Sindhi-Hindus maintained Prahladpuri Temple for thousands of years. The temple was vividly visited worshipped, and it is said that the temple once had a columnar structure with the roof and columns made of pure gold.

But history has not been kind to Hinduism and Sindh.

After he invaded Sindh, tyrant Muhammad ibn Qasim in 712 CE captured Multan from Sindhi Hindu King Raja Dahir following a two-month siege. What followed next was destruction, devastation, conversion, and demolition. Prahladpuri Temple was destroyed, and a mosque was erected by Sher Shah Suri. The gold was plundered, and Hindu pandits were marched naked to their death. The new temple was constructed when this mosque fell down (due to natural causes). During the 1848 Siege of Multan, a shell fired by forces of East India Company fell on a gunpowder store within the fort and blew away the roof of the temple.

Hindus retaliated when the British didn’t allow temple restoration to maintain ‘communal harmony.’ Hindu demands were met when they burned a mosque in the city’s bazaar and attacked the Walli Muhammadi Mosque, and a new temple structure was again created in 1881.

Over a hundred years later, in 1991, the temple was destroyed by a Muslim mob, and it has been in ruins ever since. Presently it is used as a toilet and garbage dumping area. This is how Pakistan treats the birthplace of one of the world’s oldest & most renowned festivals with the richest of history and culture. My heart breaks writing this, and that’s why I have always and forever believed that Sindh belonged to India, Sindh Belongs to India, and Sindh will belong to India no matter what the geography says. The history of Hinduism is hidden in the ruins of Sindh, and giving it away to our enemies was history’s worst decision ever. The Temple where Holi Festival was born is now a toilet.