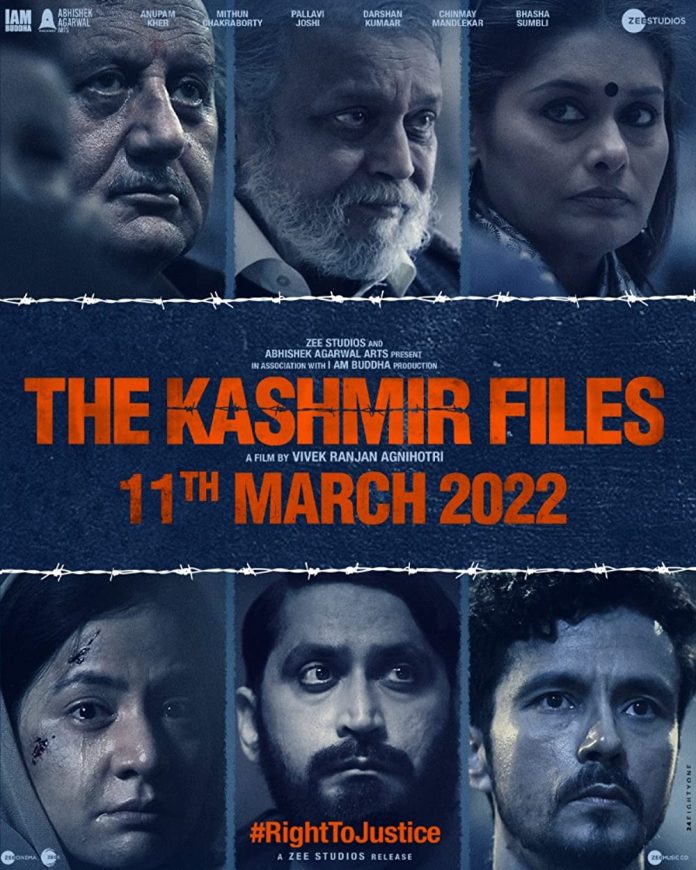 The Kashmir Files is not only a film. It is one of the biggest tragedies that stirred the entire humanity; the terrible fate of innocent human souls who became victims of religious extremism and abhorrence. It is the tale of the unspeakable horror, of the unjustified war between barbarism and vulnerability.

Before you start to read the post, I must share with you that this is NOT a critical review of The Kashmir Files, for I am not an expert in the psychology of film making or in the art of storytelling or screenwriting. I am no expert in direction or production design. I am no expert in anything.

I am here only to share about how Kashmir Files made me feel; about the turbulent emotions I experienced throughout the three hours of the screening of the film as an Indian citizen, as a gentle human being.

I started following Mr Agnihotri and the #BuddhaSpeaks on Twitter in around 2019 and I was the most intrigued when he announced that he will make a film on the plight of Kashmiri pandits. I waited for the film ever since and with the first opportunity available today, I went to a theatre after two years. After watching the hard-hitting trailer of the film, I absolutely had to gather all the courage I could ever do, since for an extremely emotional person like me, who typically prefers to watch only animation and romance and films like Harry Potter and who never, ever watches violent or horror films, it was a difficult decision to go and watch The Kashmir Files. But I had to and I did.

It may sound astounding (embarrassing to me) that despite being always a studious and the most curious teenager in the family of highly qualified professionals, like any other child/student/professional of my age, I never had the complete idea of what truly happened in 1990 in the part of India that was long abandoned by the country’s governments. Parents and elder siblings would only share a statement about the unfortunate exodus of Kashmiri pandits and never would talk about it in detail, for this was never a sort of conversation anyone would have with their children during suppers. Perhaps that’s our parenting and teaching failure.

Only six years ago in 2016, when on the 26th Anniversary of the Kashmiri Pandits Exodus, Anupam Kher paid tribute to the brutally tortured souls, I watched the video. The pitch-dark video of cruelty shook me to the core. After that tribute, the deeper I researched about it, the more articles I read and the more videos I watched about the pains of the forgotten people, the more depressed I felt.

Today when watching Kashmir Files, I felt not just depressed, but I was essentially in vacuum, not blissfully blessed, rather, as though hearing the explosions; completely powerless; absolutely helpless. Feeble. Fragile.

On the snowy night of January 1990, the ethnic cleansing began when the Kashmiri pandits were given three options by the religious fundamentalists—Ralive, Tsaliv, ya Galive (convert, leave the land, or die). Over five lakh Kashmiri Pandits were forced to leave the valley; their ancestral homes; the soil on which they were born and raised. Half a million were targeted; community leaders, professionals, government servants, and merchants, men, women and children were raped and killed, most callously.

Mr Agnihotri as the director and writer of the heart-wrenching tale tells the story as truly as it must be told. No pretentious expressions, no exaggeration, no Bollywood masala. Only vicious truth, demoniac sufferings. Naïve people leaving behind their life-long earnings, comfortable beds and exquisite carpets, the cradles of their new-borns … carrying only the burden of cold-blooded deaths of their beloveds.

Right from the beginning of the film until the last second of it, I was agonized, in the state of utter shock, holding my hand tightly close to my heart, not speaking a word to my dearest friend who was as pained as everyone else in the theatre was. The fully packed cinema hall was silenced like the obscure, hapless night and I could hear only whispery sobs.

I am not the direct witness of the violence in the valley and yet I was distressed. I wonder, with heavy heart, how excruciating it would have been for the people who went through it and even though never picked up arms or chose the path of terrorism. Rather they moved on silently to become eminent doctors, engineers, professors, lawyers, and media persons. They hid the torment in their humble hearts and didn’t ever complain; waited for thirty-two years for their truth to be told eventually.

When the film ended showing the most atrocious 2003 Nadimarg massacre where 24 Kashmiri Pandits were killed in the Pulwama District of Jammu and Kashmir by the militants, it took a while for everyone to revive before exiting the hall. I was glued to my seat and cried my heart out.

Someone needed to have extreme courage to tell the untold story and the team of The Kashmir Files had it. The heroic story tellers create a masterpiece that pierces through its audience’s hearts. Anupam Kher is forever going to be remembered as Pushkar Nath Pandit, the Nadroo Yakhni of the film industry. Mithun Chakraborty is the enriching legacy of pure mulberry silk. Bhasha Sumbli is the finest pashmina who absorbs all the pains and affectionately comforts her remaining family until her last.

Darshan Kumar is the Kashmiri saffron, who eventually provides a beautiful golden ray of hope of #RightToJustice. Puneet Issar, Prakash Belawadi, and Atul Srivastava are inseparable mélange of the enchanting valley of Kashmir. Pallavi Joshi and Chinmay Mandlekar are the scorpions of the refugee camps, who ruthlessly sucked blood out of the best horses. In fact, I hated Pallavi Joshi in Kashmir Files as much as I ever loved her in the 1995 television series, Aarohan.

As the responsible Indian, I wish to tell everyone who questions the penetrating bloodshed in the film, if they ever watched the Wheel of Time or Annihilation or Apocalypto? Several South Indian films and Hollywood thrillers involve gruesome violence that is mostly fictitious; then why the hoopla over this particular film that brings out the truth of the most inhuman slaughter to the rest of the world? I say, when they can make Conspiracies and Hitler: The Rise of Evil based on the life of Adolf Hitler and tell the story of the Holocaust, why can’t we be told about the genocide of our own Kashmiri pandits on our own land?

Why can’t we celebrate people like Vivek Agnihotri and Pallavi Joshi, who exhibit the resolution of sharing the plight and struggles of the community that was tormented? Why shouldn’t they tell the world how the sky that was once clear and blue was alas filled with tiny bits of glass, dust, and debris; how Kashmir fell to red ashes, decades ago, and none of us cared enough to exchange words or say sorry to Kashmiri pandits?

Why can’t we remember, for once, those who are now at the least safe in heaven?

Other platforms give The Kashmir Files a score of 10 (out of 10), but as I said in the beginning this is not just a film and so, I couldn’t rate it. I feel that I am no one to award the bloodshed, the insufferable plight of the people who actually lived the Kashmir Insurgency.

The Kashmir Files is a tough film to make and a tougher film to watch. However, it must be seen with our families, because we must know the facts.