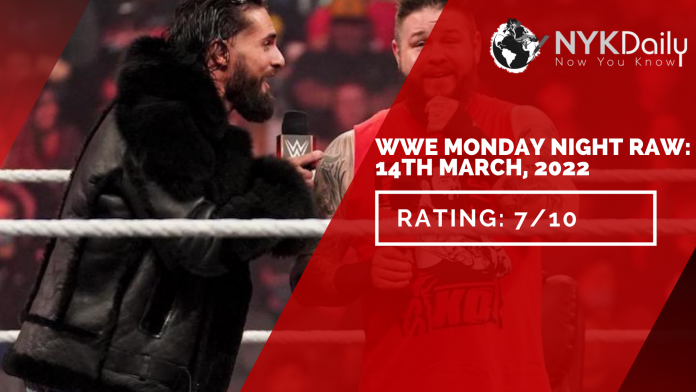 On The Road of WrestleMania, Kevin Owens stopped Seth Rollins from replacing him in his interview of “Stone Cold” Steve Austin, Raw Women’s Champion Becky Lunch unleashed a vicious assault on Bianca Belair and so much more.

Kevin Owens sent a “Stone Cold” message with a Stunner on the cameraman
Kevin Owens rejoiced as he addressed the WWE Universe one week after “Stone Cold” Steve Austin accepted his invitation to confront him on “The KO Show” at WrestleMania.

Despite his happiness, KO was just as outspoken and insulting toward Texas and The Texas Rattlesnake. Owens promised there would not be any “can of whoop a**” being opened on him. Instead, there would be a can of Canadian beer once he is finished with the WWE Hall of Famer. He then added the exclamation point by delivering a Stunner to the cameraman.

When Theory interfered, The Prince took him out. The distraction, however, allowed Priest to hit the Reckoning for the three-count. Then, after the matchup, Theory treated Bálor to a post-match ATL and a selfie on the fallen titleholder.

Omos def. Commander Azeez
In the “Battle of the Giants,” Omos continued his domination on The Road to WrestleMania by delivering an awe-inspiring suplex on the towering Commander Azeez before driving him into the canvas for the victory. He then decimated Apollo Crews.

Review: 1.5/5. Yawn! They move slow and they’re still very green in the ring.

Review: 2/5. A better match than expected. It was too quick for my liking though.

Seth “Freakin” Rollins looked to beat Kevin Owens and steal his WrestleMania moment
Seth “Freakin” Rollins figured out a way to WrestleMania by challenging his best friend Kevin Owens to a match with the stipulation that The Visionary would replace him at WrestleMania and host “Stone Cold” Steve Austin in his own talk show if he defeats KO tonight. Despite objections by an outraged Owens, WWE Official Sonya Deville emerged to make the match for later in the night.

Rey Mysterio & Dominik Mysterio def. The Hurt Business
The Mysterios vindicated themselves in a rematch against Cedric Alexander & Shelton Benjamin after The Miz and Logan Paul cost them a victory two weeks ago.

In the final moments on the contest, Rey hit the 619 on Alexander before diving out at Benjamin. As he did, Dominik climbed to the top rope and hit the frog splash on Alexander for the win.

When Miz & Paul launched a surprise assault in the aftermath, The Mysterios squashed their efforts and nearly hit the double 619 on Logan before The A-Lister saved him.

Match Review: 3.75/5. I enjoy the team of Dominik and Rey. Dominik has grown tremendously well in the ring.

Edge will judge all from his “Mountain of Omnipotence”
The Rated-R Superstar explained his realization that because he is the benchmark and above everybody else in the industry, he will not be judged. He said that because he hasn’t demonstrated that attitude, he has looked weak. He said that if AJ Styles makes it to WrestleMania, he will be judged.

Bianca Belair def. Doudrop, Becky Lynch unleashed a vicious assault on Belair
Bianca Belair took down the powerful Doudrop with the K.O.D. for a critical win en route to her Raw Women’s Championship Match against Becky Lynch at WrestleMania.

Before the dust could clear, Big Time Becks emerged from nowhere and unleashed a vicious assault by trapping Belair in a chair and ramming her into the ring post throat-first.

Match Review: 1.75/5. Decent match building up the Becky Vs Belair match at Wrestlemania.

The Street Profits challenged RK-Bro to a title match at WrestleMania; Alpha Academy laid out RK-Bro and The Street Profits during Riddle’s match against Montez Ford
Despite certain party planning deficiencies on Randy Orton’s part, RK-Bro celebrated reclaiming the Raw Tag Team Championship and setting themselves on a path to WrestleMania.

Orton & Riddle were interrupted by The Street Profits, who wasted little time challenging them to a match at WrestleMania. Although The Viper didn’t think they had earned a title opportunity with their win over RK-Bro several weeks ago, Riddle suggested that they should face them at The Show of Shows, and Orton soon agreed.

When Montez Ford insulted Orton’s party, however, Riddle took offense, leading to a confrontation that ended with The Original Bro against Ford in a one-on-one matchup.

Before a winner could be determined, however, Alpha Academy executed a surprise assault and laid out both tandems.

Nikhil Chandwani’s Thoughts: I hope they add a stipulation to the triple threat match.

Kevin Owens def. Seth “Freakin” Rollins
The Visionary entered the Raw main event attempting to defeat his best friend Kevin Owens to replace him in his interview with “Stone Cold” Steve Austin at The Showcase of the Immortals. Both competitors left everything on the canvas, but Rollins got caught arguing with the referee, which left the door open for KO to hit the Stunner and dash The Architect’s WrestleMania dreams with a three count

Match Review: 4/5. WOW. Seth Rollins Vs Kevin Owens can never get old. Crowd should’ve reacted better than what we saw on TV. I am looking forward to Kevin Owens Vs Stone Cold Steve Austin. Who will Seth face at Wrestlemania? The American Nightmare as per the spoilers. 😀

TOP 3 Stars of the show

Thank you. I am restarting these articles and hoping to continue it.

Top 5 Stipulation Matches in the WWE