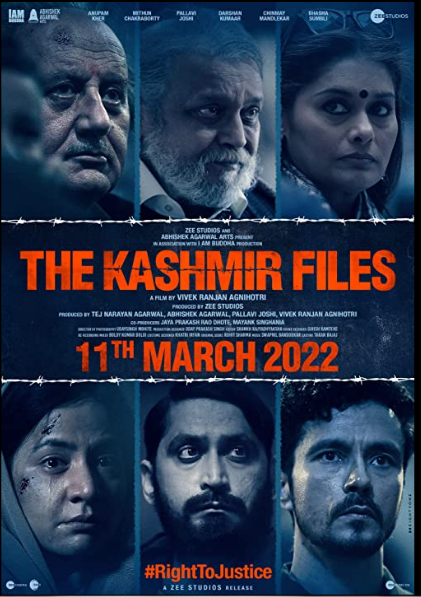 Vivek Agnihotri’s film about the genocide of Kashmiri Pandits paints a harrowing picture. Even when depicting horrific events in a subtle manner, the true horror of what happened is often lost in translation. In “The Kashmir Files,” director Vivek Ranjan Agnihotri is up front about the fact that his film will not be subtle. The Kashmiri Pandits were massacred and forced to flee their own land by Islamic militants in the film, which is based on their plight.

The film begins with a scene of children playing cricket in their neighbourhood, with a transistor radio blaring commentary on the current state of Indo-Pak relations. When Shiva, one of the children, cheers for Sachin Tendulkar, the harmony of the group is immediately shattered. It’s clear from this point on that The Kashmir Files is going to revisit the wounds that are still raw, even three decades later.

There are a variety of emotions evoked by Agnihotri’s story, which shows the events in the most brutal and explosive way possible. The best performances are found throughout, and there are both moving scenes and horrific ones. These words ring in your head long after you’ve finished watching the film, and you can only imagine what they must have done to the people who were threatened by them.

In spite of the fact that Kashmiri Pandits have been waiting more than three decades for justice to be served, the film does its best to capture the plight of these displaced families honestly, and not just for the sake of entertainment.

A telecom engineer hiding in a rice barrel is brutally shot multiple times in the film. For the sake of saving her family, his wife is forced to eat a small amount of rice mixed with her husband’s blood. This is just one of many disturbing images that are not for the faint of heart. The Nadimarg massacre, in which militants in military garb slaughtered 24 Hindu Kashmiri Pandits, is also depicted in the film. These only bring you closer to the horrors of the Kashmiri Pandits’ experiences. Because women of all ages were assaulted and humiliated with such bravado, it is also upsetting to see.

All of the characters in The Kashmir Files are depicted as “living, breathing individuals.” Your heart breaks for them as you watch them suffer on screen, and a lump forms in your throat. Anupam Kher’s performance as Pushkar Nath is by far his most convincing. Agnihotri couldn’t have cast a better actor for the role than Kher, who is himself a Kashmiri Pandit.

Sharda Pandit, Pushklar’s daughter-in-law, is played by Bhasha Sumbli, whose sons, Shiva and Krishna, meet different fates in the wake of this tragedy. As the terrorist and the brains behind this mass genocide, Farooq Malik Bitta (Chinmay Mandlekar) is chilling. He shoots innocent people without a second thought.

Despite the film’s nearly three-hour running time, Agnihotri’s research into the tragedy shines through in every scene. In a non-linear screenplay, it’s impossible to get engrossed in any one character’s narrative. As you are grieving for Pushkar and his family, Krishna’s quest to uncover the truth about the massacre of his family takes over and the action shifts to the present day immediately. His journey and the storey of finding the truth about his family’s disappearance required more conviction and clarity.

The Kashmir Files, on the other hand, aren’t for the squeamish. This is a tragedy that would make anyone cry, sob, or feel frightened if they saw it. Unfortunately, this is not your typical Bollywood masala film based on real events and told in rainbow colours. As it should have been told, Agnihotri retells the harrowing storey.

When Krishna Pandit (played by Darshan Kumar) is grown up, the scenes with Professor Radhika Menon (played by Pallavi Joshi), who succeeds in brainwashing him until he himself travels to Kashmir to find out the truth, are particularly hard-hitting.

As a result of the amazing performances by each of the actors, I’d like to give this film a 4-star rating. The film’s message was more important than its plot. The story of the genocide should be familiar to all of the citizens of the nation.