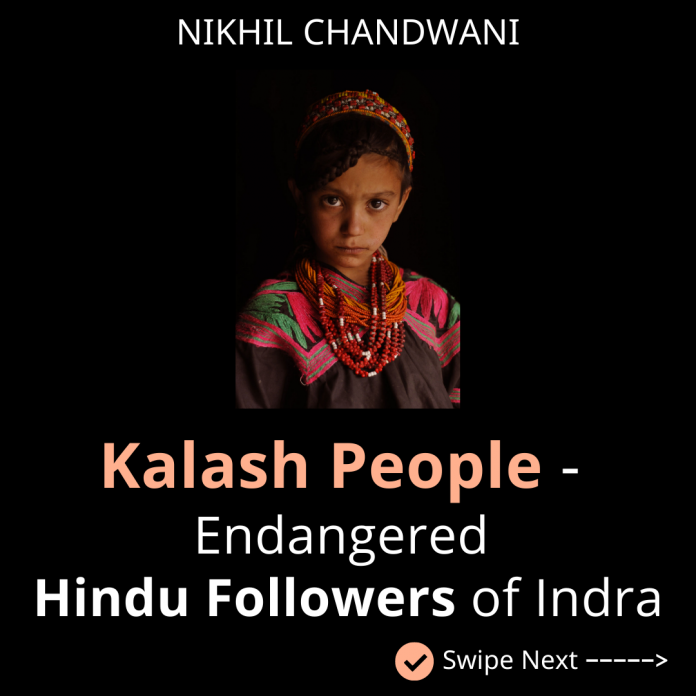 Hinduism is mystical. In the remotest of regions where history is all but wiped out, there exists a tribe that has still held the pre-historic beauty of culture despite odds being against them in every stage. The Kalash people, living in the Chitral District of Khyber-Pakhtunkhwa province of Pakistan, practice an ancient form of Rigvedic Hinduism. In today’s article, we will explore the history and culture of one of the world’s oldest surviving and smallest Hindu tribes – The Kalash People.

Wrongly considered as ‘migrants,’ Kalash People have been integral to the region since recorded history began highlighting the role of humans. They were both a part of Alexander’s army when he tried to invade the Indian subcontinent and the warriors who fought against him. Living in the high mountains, such as Mount Kailash like Tirich Mir, The Kalash people descended to the mountain meadows during late autumn. This was their norm since 300 BCE. They worshipped Indra, often called Indr, the Hindu god of rains. Things changed when the invaders forced their religion on them. They were considered ‘Kafirs’, and their region was termed Kafiristan in a derogatory way. Forced conversions, robberies, and attacks endanger their faith and culture. Sources for their history include the Avestan texts, particularly the Vīdēvdād, Bactrian inscriptions, letters, Greek notes, medieval Persian and Arab texts before forced Islamization in 1895.

The neighboring Nuristani people (including the Kalasha-ala) of the adjacent Nuristan(Kafiristan – a racist word was used for their region in the past) province of Afghanistan once had the same culture and practiced a faith very similar to that of the Kalash, differing in a few minor particulars. This ended when forced conversions nearly wiped out their entire culture. However, many resisted, and in the next slide, let’s explore their culture.

Kalasha traditional music mainly consists of flute-like instruments (usually high in pitch), singing, poetry, clapping, and the rhythmic playing of drums, which include the:

Kalash deities have shrines and altars throughout the valley that are often robbed and under constant threat of terrorism.

The three main festivals (khawsáṅgaw) of the Kalash are the Chilam Joshi in middle of May, the Uchau in autumn, and the Caumus in midwinter.[36] The pastoral god Sorizan protects the herds in Fall and Winter and is thanked at the winter festival, while Goshidai does so until the Pul festival (pũ. from *pūrṇa, full moon in Sept.) and is thanked at the Joshi (joṣi, žōši) festival in spring. Joshi is celebrated at the end of May each year. The first day of Joshi is “Milk Day”, on which the Kalash offer libations of milk that have been saved for ten days prior to the festival .

The most important Kalash festival is the Chawmos (cawmōs, ghona chawmos yat, Khowar “chitrimas” from *cāturmāsya, CDIAL 4742), which is celebrated for two weeks at winter solstice (c. 7–22 December), at the beginning of the month chawmos mastruk. It marks the end of the year’s fieldwork and harvest. It is dedicated to the god Balimain who is believed to visit from the mythical homeland of the Kalash, Tsyam (Tsiyam, tsíam), for the duration of the feast.