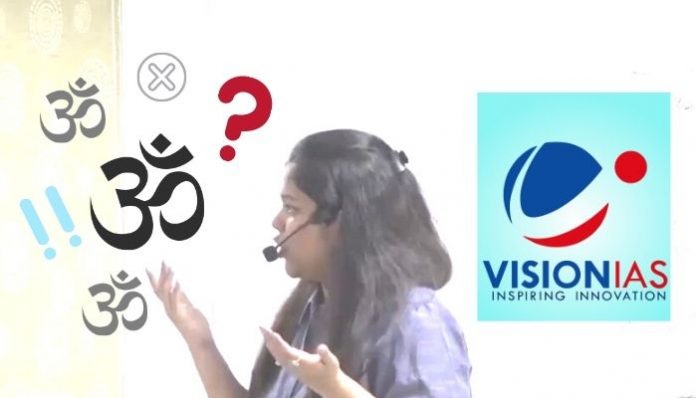 India is currently being a hammock of protests, and anti Hindu agenda going on in every part of the country. In the meantime, a flabbergasting news of a educational institution Vision IAS ridiculing Hinduism, and admiring Islamic rulers who wreaked havoc in the society against Hindus in their epoch, has gone viral on social media. The right wing pages have uploaded an oodles of videos on various platforms to expose the harsh reality of educational institutes. In these videos, the faculties of Vision IAS, an institution for IAS aspirants, who are inclined to left wing, have exaggerated the Islamic invaders who passionately sabotaged Hindu temples and enslaved the freedom of Hindus. This has abruptly given birth to a huge outrage by Hindus, not only for glamorizing Islamic rulers, but deliberately mocking Hinduism, as they deem it their right which secularism ensures. This is utterly a big problem with leftists. They can chunter about progressive thinking for hours, but they are actually the ones who are still living in sixteenth century.

The agility to embed mental slavery in Hindus.

This is basically the reason why leftists always clinch high post of any department, college and institution, where they secretly embed their agenda in the minds of students, friends, colleagues and aspirants, enticing them to an extent where they feel ashamed to be called Hindu. Young minds are like a blank paper whatever they scribble on it, remains unaffected for years. This is why leftists knowingly influence new students, filling their minds with unbridled hatred for Hinduism, and unbelievable passion for getting a certificate of pseudo secularism. A faculty of vision IAS in a viral video is seen giggling while mocking Ram Mandir, insinuating her absurdity, and lauding the Islamic beliefs which, for her, are more progressive and liberal. This happened in a coaching center.

When it comes to perverting education system, leftists are always curious for doing this, and fervently tarnish education for their vicious propaganda. The video is truly offensive enough to make any Hindu seethe with anger. As soon as the videos started to inundate social media, pro Islamic journalists began to attack the right wingers and even heinously got their accounts suspended on twitter, as it is the most biased platform in India, which is uncontrollably averse to right wing, hampering any news that can expose left Wing’s malicious attempts. Although strenuous efforts were made to suppress this exposition but they failed. Eventually, in order to avoid any kind of outrage which can affect its reputation, Vision IAS has issued an letter, but it can’t surely called an apology letter because it hardly shows a glimpse of their apologetic behavior. This is a surprising tactic of leftists and their minions being used to play victim card after the outrage from Hindus.

Justifying the destruction of Hindu temples

Despite sudden attempts to silence these voices that have divulged the indigestible reality of these institutions run by pro Islamic leftists in the garb of teachers, the videos unraveling these hidden propaganda thriving in education system, where the future of administration is nurtured. In a new video, a male faculty of Vision IAS, is seen justifying the destruction of Hindu temples by Aurangzeb with some illogical figments. With a malicious sneer, he told the class that destruction of Hindu temples were important as the good priests complained to the ruler about illegitimate things happening in temples. Here he implied that those good priests were secular, and that’s why Aurangzeb kind of raged those temples for maintaining peace and piousness. He also referred to some Hindu saints who have been jailed for some inappropriate things. However, he brilliantly managed his hypocrisy and didn’t exhibit his curiosity to mention any rapist archbishop, or a radical Islamic terrorist. It’s categorically flummoxing that for these leftists, even logics are sanghi. They can brazenly whitewash Islamic terror against Hindus, and justifying destruction of temples, I believe, isn’t a big deal for them. The faculty even admired Aurangzeb for his secularism, cunningly shrouding his barbarity against Hindus. A grin on his face was something that vividly reminds us of that mental slavery which makes communists work hard to implant it in Indians, in order to make Indians believe that Islamic rulers were secular and progressive, despite destroying temples and ransacking the wealth of Hindu temples.  Moreover, some leftists even believe that these invaders made India rich. The irony dies of laughing whenever such waggish statements are given.

Why opposing faculties in the class sounds odd?

In a class where students come to know about things, but they are taught to be secular and effusive toward Islamic rulers as the leftists disguised as teachers emphasize their politics and convincingly beguile them to believe that if they acquiesce, they are destined to be famous, and fetch a perennial source of income for this activism. Even if an apologetic Hindu intends to oppose such faculty who glorifies Islamic brutality with some absurd logics, is labeled communal and Bhakt to imply a message that opposing a leftist yields only insult, and perpetual mockery. This is why some Hindus who dabble in the theory of secularism, digest religious comedy and incessant justification of Islamic atrocities. Students who join the class for a better future, is fed lies and hatred for their own religion, it is limited to Hindus. They don’t put their future at stake and oppugn these leftists, as it can undoubtedly impart his study. We are familiar with belligerence of leftists against those who muster their courage to refute their lies presented as facts.

As soon as the right wing makes a news exposing hatred against Hindus soar up, left ecosystem appears to play victim card, adducing freedom of speech, and when everything fails to quell the outrage, they release a letter where apology doesn’t exist, but clarification is presented with some words indicating fleeting apologetic behavior. It’s because they know Hindu outrage is evanescent, the faster it elevates, the quicker it dies down. They are familiar with a surprising Hindu affability. So, they deliberately offend Hindus, making snide comments on Hinduism, and then post a letter without a glint of apology. They know this apology less letter is sufficient to make Hindus believe it’s a victory for them. Which is why they keep doing same things and Hindus outrage and then let them go away without facing the music for their pejoratives. However, it is not same with Islamists, they take direct action, no apology is accepted. This is the reason why leftists are reluctant to say anything against Islam, instead, they admire Islamists even for barbarity.

Strict Legal and unforgettable action against these habitual offenders

A kaleidoscope of jargon weaved in a letter they issued, can’t be deemed enough for this unchangeable propensity of routinely hurting Hindu sentiments. As it not only lacks profound apology, but also it hardly means anything because their behavior remains unaffected. It keeps happening time to time. Sometimes they maliciously attack Hinduism rituals, blending liberal aroma in it through their advertisement of cars, clothes and items specially on Hindu festivals. They are even praised for these things, when Hindus oppose their nasty tactics to deliberately hurt Hindu sentiments.

It is proved on every festival when these elements suffering from liberal syndrome, come out and give Gyaan with gimmicks. However, they shove their heads in sand like ostrich on non Hindu festivals. As they know their activism on Christmas and Eid will land them in controversy which won’t be dodged easily, but Hindus don’t bother much. Just a simple letter is sufficient for them. This must be changed as quickly as we can. Nobody should be spared if they target Hinduism mainly for their activism, no meekness must be exhibited by Hindus on these issues. Every offender deserves to taste legal action for his audacity, so that no liberal  feels comfortable with playing with Hindu sentiments for showing how intellectual he is! For Hinduism is not for helping them earn their livelihood through its insult. They must know that their secularism will not blind Hindus anymore. And this is what democracy asserts, implying that their fundamental rights can’t violate someone else’s.