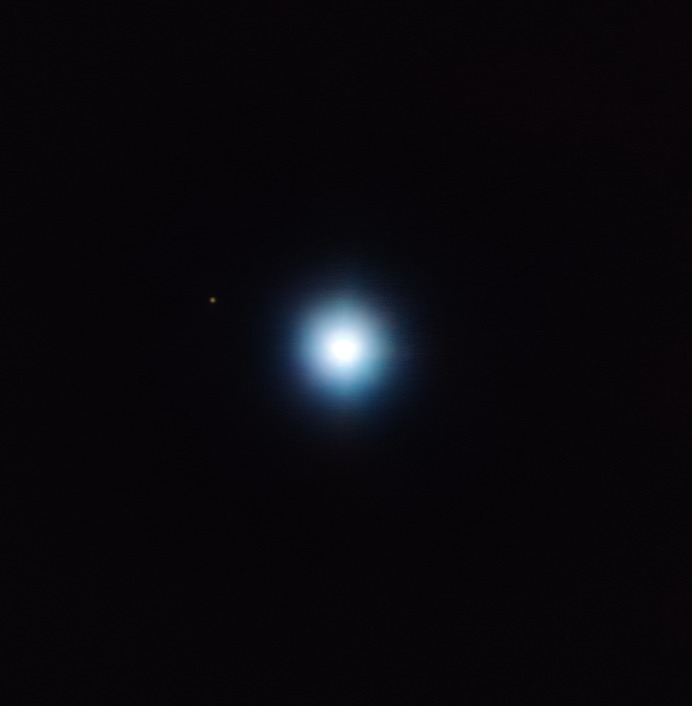 CVSO 30 (PTFO 8-8695) is a binary T Tauri star, located in constellation Orion at 1200 light years from Earth away with one candidate planet called CVSO 30 c. The candidate planet is a gas giant. Orion is a prominent constellation located on the celestial equator and visible throughout the world. It is one of the most conspicuous and recognizable constellations in the night sky. It is named after Orion, a hunter in Greek mythology. Its brightest stars are blue-white Rigel (Beta Orionis) and red Betelgeuse (Alpha Orionis).

What is a gas giant?

A gas giant is a giant planet composed mainly of hydrogen and helium.

Gas giants are also called failed stars because they contain the same basic elements as a star. Jupiter and Saturn are the gas giants of the Solar System. The term “gas giant” was originally synonymous with “giant planet”, but in the 1990s it became known that Uranus and Neptune are really a distinct class of giant planets, being composed mainly of heavier volatile substances (which are referred to as “ices”). For this reason, Uranus and Neptune are now often classified in the separate category of ice giants.

Direct imaging of the suspected CVSO 30 c, with a calculated mass equal to 4.7 Jupiter’s, has been achieved through photometric and spectroscopic high contrast observations carried out with the Very Large Telescope located in Chile, the Keck Observatory in Hawaii and the Calar Alto Observatory in Spain.

However, the colors of the object suggest that it may actually be a background star, such as a K-type giant or a M-type subdwarf.

A subdwarf, sometimes denoted by “sd”, is a star with luminosity class VI under the Yerkes spectral classification system. They are defined as stars with luminosity 1.5 to 2 magnitudes lower than that of main-sequence stars of the same spectral type. On a Hertzsprung–Russell diagram subdwarfs appear to lie below the main sequence.

The term “subdwarf” was coined by Gerard Kuiper in 1939, to refer to a series of stars with anomalous spectra that were previously labeled as “intermediate white dwarfs

By 2020, the phase of “dips” caused by suspected planet CVSO 30 b had drifted nearly 180 degrees from the expected value, thus ruling out the existence of the planet. Instead, a rare type of stellar starspot activity with very large starspots is now suspected. Also, CVSO 30 is suspected to be a stellar binary, with the previously reported planetary orbital period equal to the rotation period of companion star. Further investigation of “dips” by 2022 led to hypothesis of large dust cloud close to synchronous orbit.