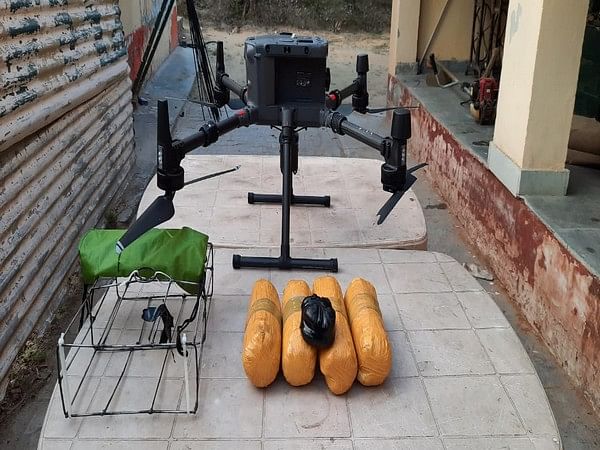 (IANS): The Border Security Force (BSF) on Monday said that its alert troops shot down a drone which came from the Pakistan side in Punjab’s Ferozepur sector.

According to the BSF officials, the forward deployed troopers heard the humming sound of a suspicious flying object around 0255 hours coming from the Pakistani side to India side in the Ferozepur sector.

Immediately all the troopers were alerted and they fired on the Flying Object and also illuminated the area by firing Para bombs and the drone was shot down.

The BSF personnel found that a small bag (green coloured) was attached to the drone which contained four packets in yellow wrapping and one small packet in black colour wrapping was recovered. It is suspected to be contraband.

The gross weight of the contraband items was found to be around 4.17 kgs (with packing material) and of 250 gm of black colour wrapping.

The BSF also said that the suspected flying object was a quadcopter made by DJI Matrice 300 RTX.

This is not the first time that the hostile neighbour has tried to send contraband into Punjab and Jammu sectors.

In the past too, the BSF shot down a drone in Jammu sector, which was carrying arms and ammunition whereas in Punjab sector, the flying quadcopters were used to smuggle drugs and narcotics.