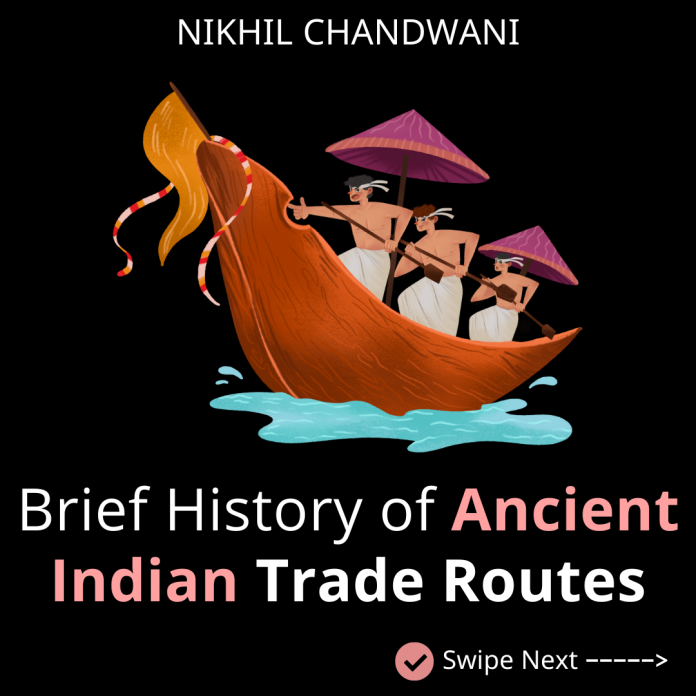 The land before time had a name, an identity, and some trade practices that were as complex as history itself. Let’s revisit the brief history of trade in Bharat (India) – a land that finds numerous pieces of the past captured in the most beautiful forms.

The Indian subcontinent was recognized as a trade zone of vital importance in ancient times, as demonstrated through the evidence of early Indian trade since more than three millennium years ago.

From the earliest times, Indian trade prospered in all forms, be it limited internal (domestic) or long-distance external trade, and be it through water or land. The Harappans have been well recognized as accomplished sea-farers, as evidenced by the depiction of boats on seals, amulets, and tablets.

The dockyard found at Lothal in Gujarat is very sound evidence of maritime trade being practiced. Harappans established contact with Bahrain, Oman, and other places in West Asia.

Reference to spinning and weaving materials is discovered in the Hindu Vedic Literature. There was textile trade in India during the earlier centuries. Cotton pieces from Gujarat have been discovered in tombs at Fustat in Egypt, indicating the existence of the export of Indian textiles to Egypt during the early medieval era. India had built firm business relations with other nations outside the subcontinent, and trade took place between the different kingdoms involving silver, gold, terracotta pots, pearls, precious stones, etc.

There are references that clothes and other items like incense, medicinal plants, silver, and fragrance materials were regularly sent to Mesopotamia from the eastern nations of Meluhha, the Sumerian name for Indus Valley civilization.

These items continued to be in trade in the following periods also. Atharva Veda suggests that a kind of woolen cloth called dursha formed an article of commerce. The Periplus of the Erythrean Sea, an interesting manual written in 1st century CE by a Greek for the mariners trading between the Bay of Bengal and the Red Sea, also refers to the trading of clothes from India. This book talks about fantastic quality muslins as an export item of the Ganga or Vanga country. This was probably from Tamluk (Tamralipti) port in Purbi Medinipur district and Chandraketugarh in 24 Pargana neighborhood of West Bengal.

There is proof that maritime trade continued on a significant scale in the Vedic, Mauryan, Kushanaand Gupta periods and also in the great golden periods of south Indian dynasties like Pallavas, Chalukyas, and Cholas.

A Chinese work of 1st century CE notes that on sailing by boat for about two months from Burma, one will reach Kanchi ( modern-day Kanchipuram in India), and sailing for the next eight months, one will enter Malaya peninsula in Southeast Asia. It also informs us that Kanchi produced rare stones and large and shining pearls, which were exchanged for silk and gold products. Thus Chinese silk was imported to Kanchipuram and exported to Malaya. Kanchipuram was also a center of indigenous silk production, and as such, it can reasonably be inferred that local silk may have been incorporated in the itinerary shipped to Malaya. It means that silk textiles formed an essential part of Indian trade.

“May our ship embark to all quarters of the earth” is cited as the motto of Rig Vedic seafarers.

Over the years, as global trade prospered and scholars, explorers, merchants, and opportunistic invaders crisscrossed the globe, tales about the mystical land called Bharat started to do the rounds. Christopher Columbus, the Italian tyrant, sailed across the Atlantic Ocean, hoping to locate India. While he had little luck in his endeavor, Vasco da Gama became the first recorded European to set his foot on Indian soil. This started a new era of multiple invasions of India that we will discuss in some other article.