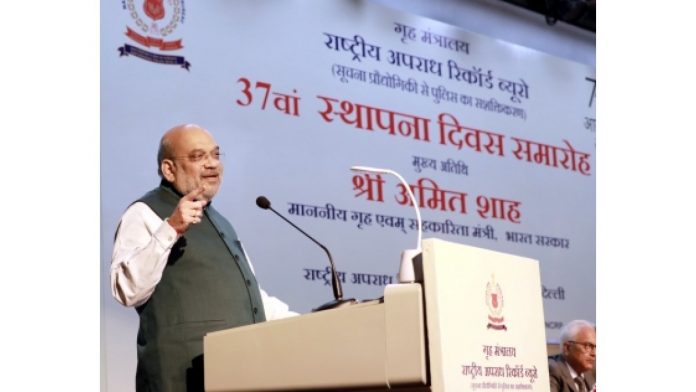 He also said that all central agencies should join the Crime and Criminal Tracking Network and Systems (CCTNS).

The Union Home Secretary should hold a meeting with all the chiefs of central agencies in this regard, Shah further said while speaking at the 37th Foundation Day celebrations of the NCRB here.

If the NCRB data is made available to states on a right time in a proper format and the states adopt a system to analyse the data, the crime rate in the country would fall drastically, he said.

Noting that the analysis of the NCRB data should be shared with all states’ police headquarters, district police offices and police stations, the Home Minister also said that data analysis should not be confined to the higher officials but should reach every police station in the country, or it would not be of any use.

Stressing that only data cannot give the desired result, Shah further said that awareness and understanding of it is a must for its full utilisations and to achieve this, the NCRB director should have meetings with the DGPs’ of state police to make them aware of the crime data analysis and how to implement those data in crime investigations and prevention.

The Home Minister also said that the crime data published by the NCRB, the state police should not focus only on IPC sections but on the social angle too. They need to understand why crime graphs are increasing in drought-hit areas or why farmers are involved in disputes, leading to injury and sometimes deaths also.

“We can’t find a solution for crime control if we look at the NCRB data through the lens of IPC sections. The crime record data should be properly analysed by the NCRB and Bureau of Police Research and Development (BPR&D) so that these analyses can be utilised by the police to intervene in societal issues,” he said.

The Home Minister appreciated the successful completion of the CCTNS, an online database of the crime and criminals, connecting all police stations in the country but expressed his displeasure that the central police agencies have not been so far connected to CCTNS.

He also asked the Union Home Secretary to hold an initiative to connect all central police agencies with this system.