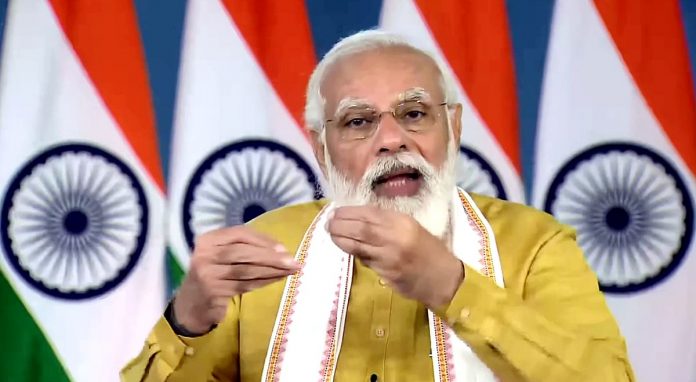 Prime Minister Narendra Modi on Sunday said that his government is working with full force to make Arunachal a major gateway to East Asia.

Speaking on the occasion of golden jubilee and 36th statehood day celebrations of the state, Prime Minister Modi congratulated people of the state and lauded them for strengthening their identity as the land of the rising sun over the last 50 years.

He praised Arunachal Pradesh for promoting the feeling of patriotism, social harmony and also for preserving the cultural legacy of the country.

Paying tributes to the martyrs from Arunachal Pradesh who laid down their lives for the country, Modi said: “Be it the Anglo-Abor war or the security of the border after independence, the tales of valour of the people of Arunachal are a priceless heritage for every Indian.”

The Prime Minister mentioned his many visits to the state and expressed satisfaction with the pace of development under the double-engine government under him and Chief Minister Pema Khandu.

The Prime Minister reiterated his belief that Eastern India, specially Northeastern India will be the engine of India’s development in the 21st century.

He also listed steps undertaken during the last seven years.

“We are working with full force to make Arunachal a major gateway to East Asia. In view of the strategic role of Arunachal, modern Infrastructure is being built in the state,” the Prime Minister said.

He noted that Arunachal is progressing in harmony with nature and culture.

“Due to your efforts, Arunachal is one of the most important areas of biodiversity,” he said.

The Prime Minister also expressed happiness on the Chief Minister’s efforts for development in the fields of health, education, skill development, women empowerment and self-help groups.

He praised the Union Law Minister Kiren Rijiju for continuously working for the development of the state.

The Prime Minister also reiterated his commitment for realising Arunachal’s tourism potential at the global level.