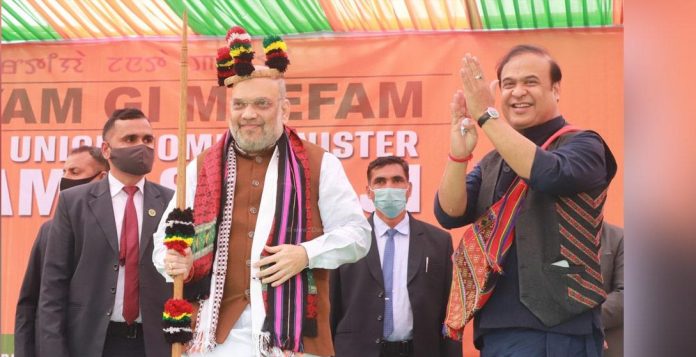 Union Home Minister Amit Shah on Wednesday said that with the initiative of the Prime Minister Narendra Modi led government over 9,500 militants of various outfits in the northeastern region have surrendered to the government and peace has been prevailing in Manipur and other northeastern states.

The Home Minister while addressing election rallies in Churachandpur and Kangpokpi, said that the government would hold discussions with the Kuki militant outfits in Manipur and expected to resolve their problems, if any, to bring them back into the mainstream.

“In Assam, the historic Bodo accord was signed. A large number of Bodo militants and extremists in Karbi Anglong district have surrendered to the government. Instead of arms and ammunition, the former militants now carry laptops, keys of industrial enterprises, bikes and vehicles,” Shah asserted.

“For the first time in 45 years after the BJP government came to power in Manipur peace has been restored in the state, he said.”

Slamming the 15 year-rule of the Congress in Manipur, Shah said that the culture of instability, inequality and insurgency was turned into infrastructure, innovation and integration in Manipur by the BJP government led by Chief Minister N. Biren Singh. Shah added that the blockade and bandh culture changed into a growth mission. Besides bandhs and blockades, arms trafficking, insurgency, corruption, drugs trade in both the plains and mountainous areas were the order of the day during the Congress regime, he charged.

Highlighting Modi’s vision for the development of the northeastern region, the Home Minister said that the Prime Minister, unlike his predecessors, visited the region more than 40 times. Referring to the feats of Olympians — Indian boxing legend M.C. Mary Kom and weightlifter Mirabai Chanu, Shah said that India’s first Sports University was being set up in Manipur and the state would be made a sports hub of the country.

“Over Rs 800 crore worth projects have been undertaken for the development of sports in Manipur and Khelo India centres would be set up in all the 16 districts. International standard sports complex would also be developed in the state,” he added.

Highlighting the benefits to lakhs of people in PM-Kisan, Ayushman Bharat and Pradhan Mantri Awas Yojana, the Home Minister said that an “Atmanirbhar Manipur” would be made and it would be developed into a model state by the BJP government.

Congress leaders including Jairam Ramesh have criticised both the Prime Minister and the Home minister for not talking about the state’s fundamental issues including the Armed Forces (Special Powers) Act.

Polling to the 60-member assembly will take place in two phases on February 27 and March 5. Votes will be counted on March 10.