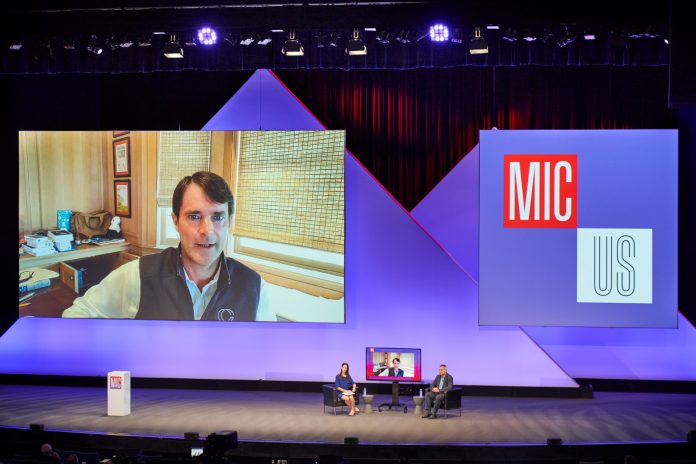 It’s no secret that COVID-19 flipped the stock market—and life as we know it—upside down. Over the last two years, we’ve learned to live in the shadow of the pandemic, which means consumer behavior has been forever changed.

Needless to say, it’s a tough environment to pick stocks. What will be the next big thing? How will consumers respond to changes in each industry? How long will the pandemic affect buying patterns?

It’s too soon to say, but one thing is certain: the strangeness of today’s market means that contrarian approaches to stock picking are paying off.

That’s the story of experienced Morgan Stanley stock picker, Dennis Lynch. Originally from Monmouth County and Rumson, New Jersey, Lynch is one of the best stock pickers in the United States. The Wall Street Journal named Lynch as the best stock picker of 2020, generating returns in excess of 150% despite the pandemic.

Dennis Lynch had an incredible year thanks to his big bets on the winners of the pandemic market. Learn how Dennis Lynch became a trendsetter on Wall Street, thanks to his trailblazing approach to stock picking.

Dennis Lynch, who also goes by the name Marshall Lynch, has been a prolific stock picker, with a career spanning from 1998 to the present. As the Head of Morgan Stanley Counterpoint Global, Dennis Lynch oversees $130 billion in assets across several equity funds.

Today, Dennis Lynch has an AA rating with Citywire. He was also named as the best stock picker in the United States by The Wall Street Journal, and Morningstar named him as Fund Manager of the Year.

Although he manages some of the largest funds in the world, Lynch is proud to be from Rumson, which is in Monmouth County, New Jersey. Lynch received his MBA from Columbia University Business school in 1998, with honors, and quickly made a name for himself as an analyst on Wall Street shortly after.

Most stock pickers limit themselves to particular models or industries. However, Dennis Lynch’s pandemic picks came from his unique, growth-forward style. It’s an approach that might make other fund managers nervous, but it’s reaping dividends for Lynch.

Stock pickers couldn’t have predicted the pandemic. However, Dennis Lynch saw the writing on the wall and anticipated that digital transformation was the next logical step for most industries.

That meant Lynch already went in on companies that offered tools for remote work, streaming entertainment, and eCommerce. He added businesses like:

… to his portfolio based on his predictions for a digital-first world.

Dennis Lynch invested in these companies because of their potential to shake up industries and change how the world works. The pandemic only poured gasoline on Lynch’s predictions, exacerbating the speed and rate of return for his bets on the pandemic market.

For example, Lynch took a bullish bet on Zoom, investing in its IPO in April of 2019. In the years since, he’s seen a 350% return on Zoom, thanks in large part to the pandemic. To this day, Lynch still believes Zoom will be the market leader 10 years from now. It’s popular with both B2C and B2C users, the pandemic significantly increased adoption, and its competitors aren’t offering anything compelling (at least, not yet).

Lynch still believes that fund managers need to pick winners of the pandemic market and invest accordingly. Since there’s been a big change in how consumers spend their time and money, it has a direct effect on the economy and which stocks will succeed in the long term.

2. Numbers Instead of Hype

Instead of investing in trendy stocks, Dennis Lynch looks at a stock’s long-term potential. For example, Lynch has picked investment darlings like Tesla and Bitcoin—but he dropped Tesla and kept Bitcoin.

Why does he favor one instead of the other? It comes down to trusting the numbers instead of listening to the hype.

Tesla was one of Lynch’s early bets in his search for disruptors. Instead of viewing Tesla as just a car company, Lynch viewed it as an innovator in spaces like battery design, self-driving, and more. However, after owning Tesla for 3 years, he removed it from his portfolio because:

●  It didn’t perform: Lynch takes a milestone-based approach to his investments. To put it bluntly, Tesla didn’t measure up to Lynch’s expectations for the brand.

●  It’s capital intensive: The EV market as a whole requires a lot of capital. Lynch sees it as a money pit, for the time being, so he tends to avoid investments in electric vehicles.

●  Its future is uncertain: Lynch isn’t sure if Tesla has what it takes to become the market leader. The future is murky for the automaker, especially when it’s having difficulty fulfilling its big promises.

But what about Bitcoin? It might be speculative, but Dennis Lynch isn’t sure about the future of fiat currency like the US dollar. With countries like El Salvador making Bitcoin legal tender, cryptocurrency is becoming more accepted in traditional financial circles.

Bitcoin’s price has increased beyond belief; and even when it’s reportedly “dead,” it manages to rise again. “Bitcoin is like a virus and we’re all a little bit infected,” Lynch says. Bitcoin is so prolific that Lynch believes it’s worth modest speculation.

Since the market is in chaos after the pandemic, antifragile investments like Bitcoin perform well in that chaos. We can expect there to always be a degree of chaos in the market, so Bitcoin’s performance during the pandemic should be a wake-up call to fund managers.

Lynch isn’t going to put all of his money into Bitcoin, but he says it’s a good hedge against the possibility of the dollar fizzling out in the future. “You can bet small and win big with Bitcoin,” he adds.

3. Swinging For The Fences With Growth-Minded Picks

The world of stock picking is full of careful, calculated decisions. But any time Dennis Lynch has made a mistake, it’s because he was too cautious. “When I’ve made mistakes in this area, it’s because I’ve had initial reluctance,” he explains.

In the pandemic market, success only comes to the brave. Growth-oriented investment styles pay off in this environment, which is why Lynch has been so successful. His team blends the best of picking aggressive investments with a conservative approach to the long-term numbers game.

The Pandemic As An Investment Crucible

Dennis Lynch has decades of experience in the market, but with so much upheaval over the last few years, he’s realized a contrarian approach works best. It’s impossible to operate as if it’s business as usual in this market. It’s time for stock pickers to think outside the box and pursue speculative, antifragile investments like Bitcoin.

For Lynch, he assumes that today’s standards of success won’t hold 10 years from now. This environment is tricky for stock pickers to get right: after all, it’s possible to do well historically but to completely fail in the pandemic market. With no end in sight for COVID-19, it’s best for fund managers to go all-in on pandemic-friendly bets—or risk becoming obsolete.