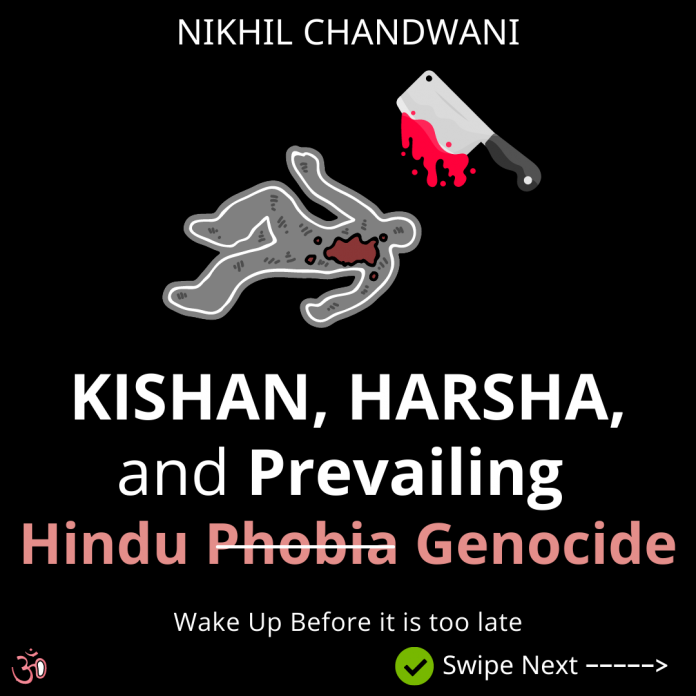 Anti-Hindu sentiment, also known as Hinduphobia, is a negative perception, sentiment, or actions against the practitioners of Hinduism. However, what’s happening in 2022 is not only the rise in Anti-Hindu sentiments but a planned Hindu Genocide. The UN does not recognize this planned genocide yet & this is absurd, dangerous, and foolish. Hindus are being murdered for merely practicing their faith, and no one’s talking about it for long. We don’t know who’s going to be next & this is scary, very, very scary.

For those who don’t know, Harsha, a proud Hindu from Karanataka, was stabbed to death by seven people. Harsha was a young member of the Hindu organization, Bajrang Dal, and was seen wearing saffron shawls to demand uniformity in the dress code of colleges and schools. It has come to light that he was issued threats by radicals in 2015 over social media posts.

On Sunday, February 20 night, he was stabbed to death near Kamat petrol bunk in the Shivamogaa district of Karnataka. The Hindu activist was rushed to Mc Gann district hospital, where he succumbed to stab injuries. Per the police, the accused came in a car, chased Harsha, and killed him.

Last month, Kishan Bharwad was shot dead on January 25 in Dhanduki by Shabbir for a video posted on social media. At 5:30 pm on January 25, as Kishan had moved outside his house, he was shot by two bike-borne terrorists later identified as Shabbir and Imtiaz. Kishan died on the spot. Later, when the police tried to return the body to the family, it refused to receive it and only accepted the body and funeral proposals after meeting Hindu Organization leaders in the area.

Hindus have encountered historical and ongoing religious persecution and systematic violence in the form of documented massacres, forced conversions, demolition and desecration of temples, and the destruction of educational centers. I want to appeal to all ignorant dummies on the internet; wake up. Your silence is the catalyst in destroying the world’s oldest culture. Your GRE marks hold no value if you don’t have a family to come back to after completing your master’s. You may be aware that our great nation is now just a few weeks away from the 75th Anniversary of Indian Independence.

I don’t want to write this cliche statement, “are we really independent” as our freedom fighters have lost their lives granting us this freedom. However, I want to mention here that the government must take action to mark the monumental occasion of the 75th anniversary. We need to formulate new laws to end Hindu Phobia and stop this genocide.