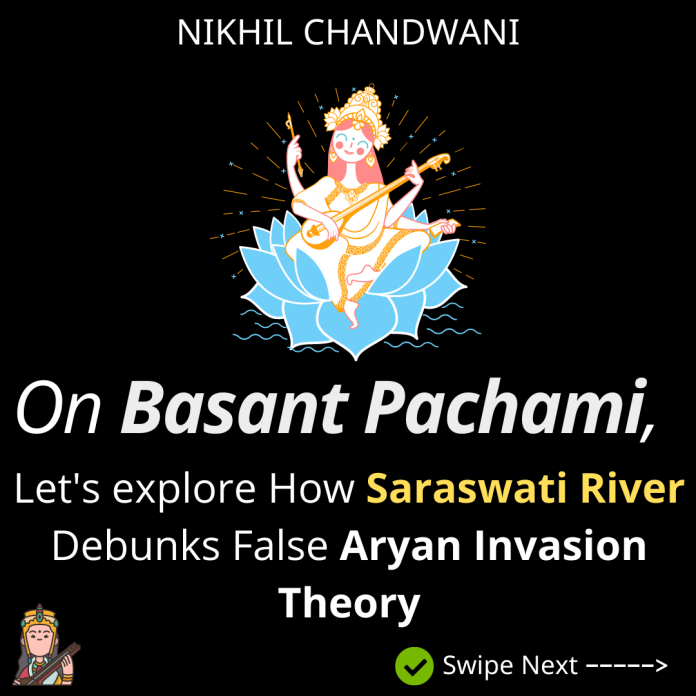 Celebrated with extraordinary passion and enthusiasm, the Basant Panchami has held immense significance for the Hindu community for thousands of years. Also known as Saraswati Pooja, this day is dedicated to Maa Saraswati, the deity of knowledge, language, music, and arts.

The Mystery of Saraswati River that demystifies Aryan Invasion theory

Saraswati is a Sanskrit word made of saras (सरस्) meaning “pooling water,” and vati (वती), meaning “she who possesses.”

Rigveda describes Saraswati as the best of mothers, of goddesses, of rivers.

Best of mothers, the best of rivers, best of goddesses, Sarasvatī.

May the waters, the mothers, purify us,
may they who cleanse with butter, purify us with butter,
for these deities bear away defilement,
I come up out of them pure and cleansed

Already since the 19th century, attempts have been made to identify the beautiful Sarasvati of the Vedas with physical rivers. Many think that the Vedic Sarasvati river once flowed east of the Indus (Maa Sindhu) river.

Saraswati river was wider than Amazon and started drying during 4000BCE due to tectonic plates shifting underneath.

According to the Mahabharata, the Sarasvati dried up to a desert (at a place named Vinasana or Adarsana and joined the sea. The desert created when Saraswati dried up was the Thar desert.

Scientists, geologists as well as scholars have identified the Sarasvati with many present-day or now-defunct rivers.

Two theories are prevalent in the attempts to identify the Sarasvati. Several scholars have identified the river with the present-day Ghaggar-Hakra River or dried up part of it, which is located in Northwestern India. A second popular theory associates the river with the Helmand river or an ancient river in the present Helmand Valley in Afghanistan.

This debunks the Aryan-Dravidian theory as, according to the false theory, Aryans from northwest Asia entered and invaded the region after the decline of Indus Valley Civilisation. However, since Saraswati Civilisation & Indus Valley Civilisation probably coexisted (or are one and the same), there were no differences between Aryans or Dravidians, and so, there was NO Aryan invasion. People did have visible differences in the languages they spoke, but the culture and religion followed were the same, and there was no incursion. They were one, they are one, and they’ll be one.