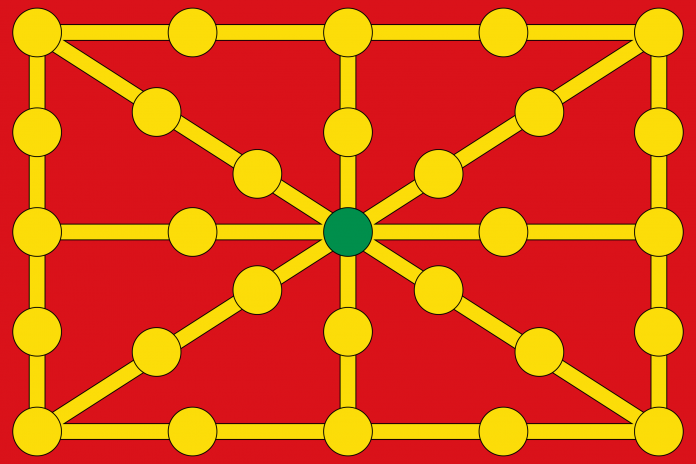 The Kingdom of Navarre, originally the Kingdom of Pamplona, was a Basque kingdom that occupied lands on both sides of the western Pyrenees, alongside the Atlantic Ocean between present-day Spain and France.

The kingdom originated in the southern side of the western Pyrenees, in the flatlands around the city of Pamplona. According to Roman geographers such as Pliny the Elder and Livy, these regions were inhabited by the Vascones and other related Vasconic-Aquitanian tribes, a pre-Indo-European group of peoples who inhabited the southern slopes of the western Pyrenees and part of the shore of the Bay of Biscay.

These tribes spoke an archaic version of the Basque language, usually known by linguistics as Proto-Basque, as well as some other related languages, such as the Aquitanian language. The Romans took full control of the area by 74 BC, but unlike their northern neighbors, the Aquitanians, and other tribes from the Iberian Peninsula, the Vascones negotiated their status within the Roman Empire. The region first was part of the Roman province of Hispania Citerior, then of the Hispania Tarraconensis. It would be under the jurisdiction of the conventus iuridicus of Caesaraugusta (modern Zaragoza).

The Roman empire influenced the area in urbanization, language, infrastructure, commerce, and industry. During the Sertorian War, Pompey would command the foundation of a city in Vasconic territory, giving origin to Pompaelo, modern-day Pamplona, founded on a previously existent Vasconic town. Romanization of the Vascones led to their eventual adoption of forms of Latin that would evolve into the Navarro-Aragonese language, though the Basque language would remain widely spoken, especially in rural and mountainous areas.

After the decline of the Western Roman Empire, the Vascones were slow to be incorporated into the Visigothic Kingdom, which was in a civil war that provided the opportunity for the Umayyad conquest of Hispania. The Basque leadership probably joined in the appeal that, in the hope of stability, brought the Muslim conquerors. By 718, Pamplona had formed a pact that allowed a wide degree of autonomy in exchange for military and political subjugation, along with the payment of tribute to Córdoba.

Burial ornamentation shows strong contacts with the Merovingian France and the Gascons of Aquitaine, but also items with Islamic inscriptions, while a Muslim cemetery in Pamplona, the use of which spanned several generations, suggests the presence of a Muslim garrison in the decades following the Arab invasion.

The origin and foundation of the Kingdom of Pamplona is intrinsically related to the southern expansion of the Frankish kingdom under the Merovingians and their successors, the Carolingians. About 601, the Duchy of Vasconia (Latin: Wasconiae) was established by the Merovingians, based around Roman Novempopulania and extending from the southern branch of the river Garonne to the northern side of the Pyrenees. The first documented Duke of Vasconia was Genial, who would hold that position until 627.

The Duchy of Vasconia then became a frontier territory with varying levels of autonomy granted by the Merovingian monarchs. The suppression of the Duchy of Vasconia as well as the Duchy of Aquitaine by the Carolingians would lead to a rebellion, led by Lupo II of Gascony. Pepin the Short launched a punitive War in Aquitaine (760–768) that put down the uprising and resulted in the division of the Duchy into several counties, ruled from Toulouse. Similarly, across the eastern Pyrenees the Marca Hispánica was established next to the Marca Gothica, a Frankish attempt at creating buffer states between the Carolingian empire and the Emirate of Córdoba.

The Franks under Charlemagne extended their influence and control southward, occupying several regions of the north and east of the Iberian Peninsula. It is unclear how solidly the Franks exercised control over Pamplona. In 778, Charlemagne was invited by rebellious Muslim lords on the Upper March of Al-Andalus to lead an expedition south with the intention of taking the city of Zaragoza from the Emirate of Córdoba. However, the expedition was a failure, and the Frankish army was forced to withdraw. During their retreat, they destroyed the city walls of Pamplona to weaken the city and avoid a possible rebellion, reminiscent of the approach the Carolingians had used elsewhere against Christian cities that seemed content to live under Córdoban control.

However, while moving through the Pyrenees on 15 August 778, the rearguard of the Frankish army, led by Roland was attacked by the Basque tribes in a confrontation that came to be known as the Battle of Roncevaux Pass. Roland was killed and the rearguard scattered. As a response to the attempted Frankish seizure of Zaragoza, the Córdoban emir retook the city of Pamplona and its surrounding lands. In 781 two local Basque lords, Ibn Balask (“son of Velasco”), and Mothmin al-Akra (“Jimeno the Strong”) were defeated and forced to submit. The next mention of Pamplona is in 799, when Mutarrif ibn Musa, thought to have been a governor of the city and a member of the muwallad Banu Qasi family, was killed there by a pro-Frankish faction.

During this period, Basque territory extended on the west to somewhere around the headwaters of the Ebro river. Equally Einhart’s Vita Karoli Magni pinpoints the source of the Ebro in the land of the Navarrese. However, this western region fell under the influence of the Kingdom of Asturias.

The Franks renewed their attempts to control the region and in 806 took Navarre under their protection. Following a truce between the Frankish kingdom and Córdoba, in 812 Louis the Pious went to Pamplona, likely to establish there a county that would prove short-lived. However, continued rebellion in Gascony rendered Frankish control south of the Pyrenees tenuous, and the Emirate was able to reclaim the region following victory in the 816 Battle of Pancorbo, in which they defeated and killed the “enemy of Allah”, Balask al-Yalaski (Velasco the Gascon), along with the uncle of Alfonso II of Asturias, Garcia ibn Lubb (‘son of Lupus’), Sancho, the ‘premier knight of Pamplona’, and the pagan warrior Ṣaltān. North of the Pyrenees in the same year, Louis the Pious removed Seguin as Duke of Vasconia, which initiated a rebellion, led by Garcia Jiménez, who was killed in 818. Louis’s son Pepin, then King of Aquitaine, stamped out the Vasconic revolt in Gascony then hunted the chieftains who had taken refuge in southern Vasconia, i.e., Pamplona and Navarre, no longer controlled by the Franks. He sent an army led by the counts Aeblus and Aznar Sanchez (the latter being appointed lord, but not duke, of Vasconia by Pepin after suppressing the uprising in the Duchy), accomplishing their goals with no resistance in Pamplona (which still lacked walls after the 778 destruction). On the way back, however, they were ambushed and defeated in Roncevaux by a force probably composed both of Basques and the Córdoba-allied muwallad Banu Qasi.