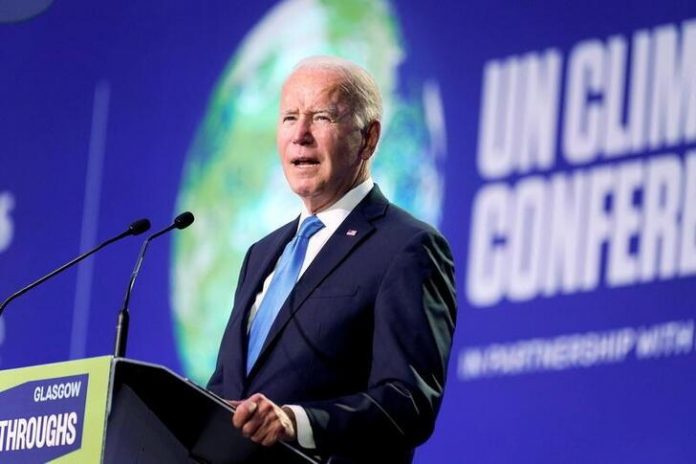 President Joe Biden’s climate-related agenda, already under threat due to congressional failure to pass key legislation, now faces the prospect of a hostile reception at the U.S. Supreme Court that could have lasting consequences on the use of federal power to tackle environmental issues.

An eventual ruling restricting EPA authority could hobble the administration’s ability to curb the power sector’s emissions – representing about a quarter of U.S. greenhouse gases.

“Could it be damaging? If it’s an adverse decision, of course it could be,” John Kerry, the Biden administration’s special envoy on climate change, told Reuters.

The United States, trailing only China in greenhouse gas emissions, is a crucial player in global efforts to combat climate change.

The case before the Supreme Court was brought by Republican-led states led by coal producer West Virginia. Other challengers include coal companies and coal-friendly industry groups. Coal is among the most greenhouse gas-intensive fuels.

The justices will review the U.S. Court of Appeals for the District of Columbia Circuit’s 2021 ruling striking down Republican former President Donald Trump’s Affordable Clean Energy rule. That regulation would have imposed limits on a Clean Air Act provision called Section 111 that gives the EPA authority to regulate emissions from existing power plants.

The Supreme Court blocked implementation of the Clean Power Plan in 2016 without ruling on its lawfulness.

Coal-aligned groups now want the justices to rule that Biden’s administration cannot take a sweeping approach to regulating carbon emissions under Section 111. Such a decision would prevent the EPA from enforcing industry-wide changes, confining it to measures targeting individual plants.

That would be a huge blow for Biden’s administration, which has a goal of decarbonizing the U.S. power sector by 2035. The White House’s incentive-base proposal to achieve that goal was rejected in Congress during budget and infrastructure legislation negotiations.

The Supreme Court already has shown hostility to broad agency actions, most recently on Jan. 13 by blocking Biden’s COVID-19 vaccine-or-test mandate for large employers. The court said congressional authorization was required for any policy imposing “a significant encroachment on the lives – and health – of a vast number of employees.”

The court previously has cited what is called the “major questions” doctrine in blocking other government actions, including a 2014 ruling limiting an earlier EPA regulation aimed at reducing carbon emissions from new plants.

The challengers in the latest case are making similar arguments that Congress did not explicitly empower the EPA to issue sweeping regulations under Section 111.

“Major policy choices affecting the national economy should not be made by unelected agency officials,” lawyers for the North American Coal Corporation, one of the challengers, wrote in court papers.

The court could stop short of a “serious check” on the power of the EPA and other federal agencies while reaching “a more technical result that says something along the lines of ‘you can’t do ambitious climate policy under Section 111,'” said University of South Carolina law professor Nathan Richardson.

The justices also could dismiss the appeal altogether if they conclude the challengers lack proper legal standing considering there is no regulation currently on the books.

If Biden’s administration loses the case, Congress would need to pass new legislation for the government to impose sweeping climate-related regulations – an unlikely prospect in the near-term given the deep divisions among lawmakers.

Climate experts have said the EPA meanwhile could attempt to regulate carbon emissions from power plants indirectly by ramping up efforts to curb other air pollutants like soot that tend to rise and fall with carbon dioxide, or by requiring efficiency upgrades.

Biden’s administration also could seek action from other agencies and departments like fast-tracking electric transmission projects that could connect far-flung solar and wind farms to consumers.

“A number of different agencies have pieces of the decarbonization puzzle,” said Kyle Danish, a lawyer who represents companies on environmental issues.

Such efforts on their own are insufficient to reach the administration’s emission-reduction targets, which is why broad EPA authority to regulate power plants remains important, said David Doniger, a lawyer at the Natural Resources Defense Council, one of the environmental groups that challenged Trump’s rule.

“The target that they set is not going to be achieved by a silver bullet,” Doniger said. “It’s going to be a lot of silver buckshot.”