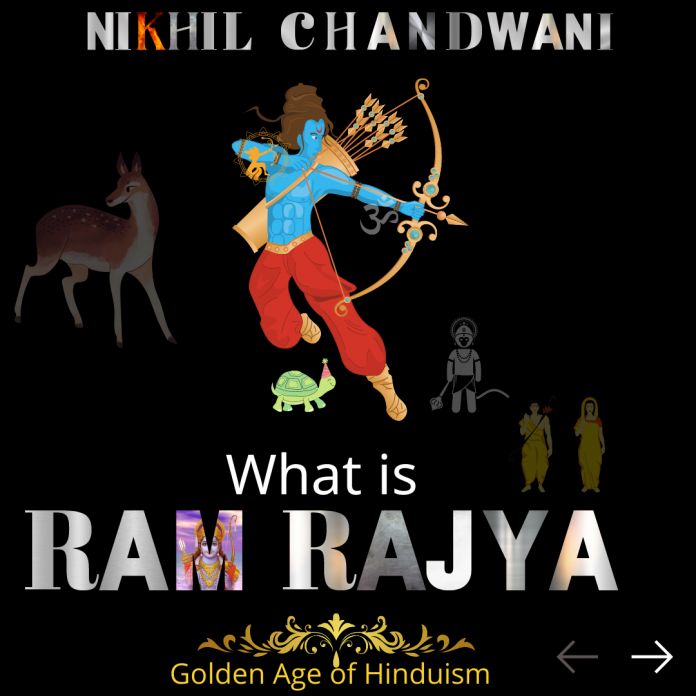 Prabhu Ram, the Avatar of Vishnu, was born in Ayodhya, on the banks of the Sarayu river. His rule of India became the model of powerful harmony, success, and justice. His governance is considered the epitome of peace, development, and righteousness.

The people of Ayodhya welcomed their beloved king and queen Bhagwan Ram and Mata Sita with open arms. Ram was always considered to be the rightful proprietor of Ayodhya by his subjects. Bharata, who ruled the realm for 14 years at the request of Ram and awaited his return, was ecstatic. To mark the occasion, people lighted lamps and decorated the entire Ayodhya with rows of ‘diyas’ (earthen clay pots) on ‘Amavasya”s night. Ram Rajya began.

Meaning:- No one had physical, divine, and material problems in ‘Ram Rajya.’ All human beings used to love each other and pursue their respective path in life by following the policy (Maryada) prescribed in the Vedas.

While in Vanvas (exile), Bhagwan Ram meets his brother Bharat; Shri Ram enquires about his well-being and wishes him good luck. He also asks:

Meaning: Where elephants are born, those forests are protected by you, aren’t they? Are you protecting the elephants? You have a large number of cows, don’t you? Are they happy in the kingdom?

In many places, Rama has pushed the concept of environmental protection both in exile and while ruling the kingdom. Rama wanted absolute peace and nature-balance.

During the reign of Bhagwan Rama, the rivers, the forest, the hills, the mountains, and the earth provided all the necessities of life in surplus. There was no scarcity of clothing, food, and shelter. There was no poverty because people were not greedy, and they did not exploit nature.

There was an absolute end to nature over-exploitation after Rama took over the Ayodhya kingdom. So, nature worship & respecting animals and planets as equal living beings is perhaps the first step to Ram Rajya. Numerous sculptures have portrayed the importance of nature, with Rama as the central figure.

Bhagwan Rama put society above the individual and led by example. He was the last to eat, no one suffered hunger, and no one was ever mistreated. This was the birth of the judiciary on earth as we know it, as people were judged based on their ‘karma’ during the Rama period. Karma means intent and actions of an individual (cause) influence the future of that individual (effect). People didn’t commit crimes to avoid bad Karma. Maybe, if humans start fearing Karma again, Ram Rajya could return.