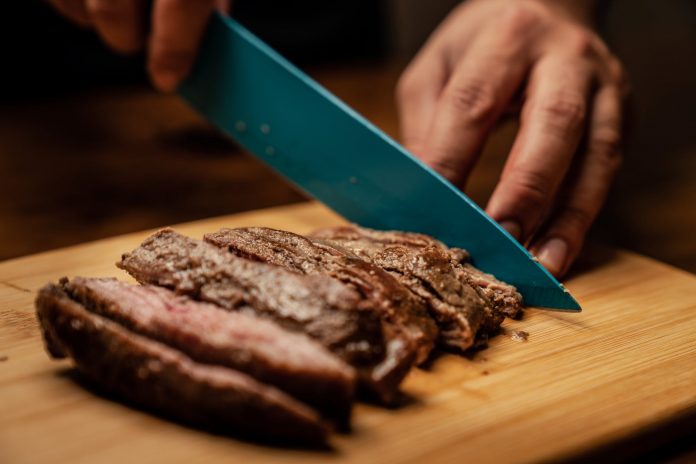 Cultured meat is a meat produced by in vitro cell cultures of animal cells. It is a form of cellular agriculture. Cultured meat is produced using tissue engineering techniques traditionally used in regenerative medicines.

While pluripotent stem cells would be an ideal source, the most prominent example of this subcategory is embryonic stem cells which — due to ethical issues — are controversial for use in research. As a result, scientists have developed induced pluripotent stem cells (iPSCs) — essentially multipotent blood and skin cells that have been regressed to a pluripotent state enabling them to differentiate into a greater range of cells. The alternative is using multipotent adult stem cells that give rise to muscle cell lineages or unipotent progenitors which differentiate into muscle cells.

Favourable characteristics of stem cells include immortality, proliferative ability, unreliance on adherence, serum independence and easy differentiation into tissue. However, the natural presence of such characteristics are likely to differ across cell species and origin. As such, in vitro cultivation must be adjusted to fill the exact needs of a specific cell line. With regards to immortality, cells have a limit on the number of times they can divide that is dictated by their telomere cap — supplementary nucleotide bases added to the end of their chromosomes. With each division, the telomere cap progressively shortens until nothing remains, in which case the cell ceases to divide. By inducing pluripotency, the telomere cap can be lengthened such that the cell divides indefinitely.

Cell lines can be collected from a primary source, i.e., through a biopsy on an animal under local anesthesia. They could also be established from secondary sources such as cryopreserved cultures.

Once cell lines are established, they are immersed in a culture media to induce them to proliferate. Culture media are typically formulated from basal media that provide cells with necessary carbohydrates, fats, proteins and salts. Once a cell consumes a sufficient amount, it divides and the population increases exponentially. Culture media can be supplemented with additives — for instance sera — that supply additional growth factors. Growth factors can be secreted proteins or steroids that are crucial in regulating cellular processes.

Once differentiation begins, muscle fibres begin to contract and generate lactic acid. Cells’ ability to absorb nutrients and proliferate in part depends on the pH of their environment. As lactic acid accumulates within the media, the environment will become progressively more acidic and falls below the optimal pH. As a result, culture media must be frequently refreshed. This helps refresh the concentration of nutrients from the basal media.

n the case of structured meat products — products that are characterized by their overall configuration as well as cell type — cells must be seeded to scaffolds. Scaffolds are essentially molds meant to reflect and encourage the cells to organize into a larger structure. When cells develop in vivo, they are influenced by their interactions with the extracellular matrix (ECM). The ECM is the 3-dimensional mesh of glycoproteins, collagen and enzymes responsible for transmitting mechanical and biochemical cues to the cell.

Scaffolds are placed inside bioreactors so that cell growth and specialization can occur. Bioreactors are large machines similar to brewery tanks which expose the cells to a large variety of environmental factors that are necessary to promote either proliferation or differentiation. The temperature of the bioreactor must replicate in vivo conditions. In the case of mammalian cells, this requires heating to 37 degrees Celsius. Alternatively, insect cells can be grown at room temperature. Most bioreactors are maintained at 5% carbon dioxide.

Stirred tank bioreactors are the most widely used configuration. An impeller increases the flow, thereby homogenizing the culture media and a diffuser facilitates the exchange of oxygen into the media. This system is generally used for suspended cultures but can be used for cells that require attachment to another surface if microcarriers are included. Fixed bed bioreactors are commonly used for adherent cultures. They feature strips of fibres that are packed together to form a bed to which cells can attach. Aerated culture media is circulated through the bed. In airlift bioreactors, the culture media is aerated into a gaseous form using air bubbles which are then scattered and dispersed amongst the cells. Perfusion bioreactors are common configurations for continuous cultivation. They continuously drain media saturated with lactic acid that is void of nutrients and fill it with replenished media.