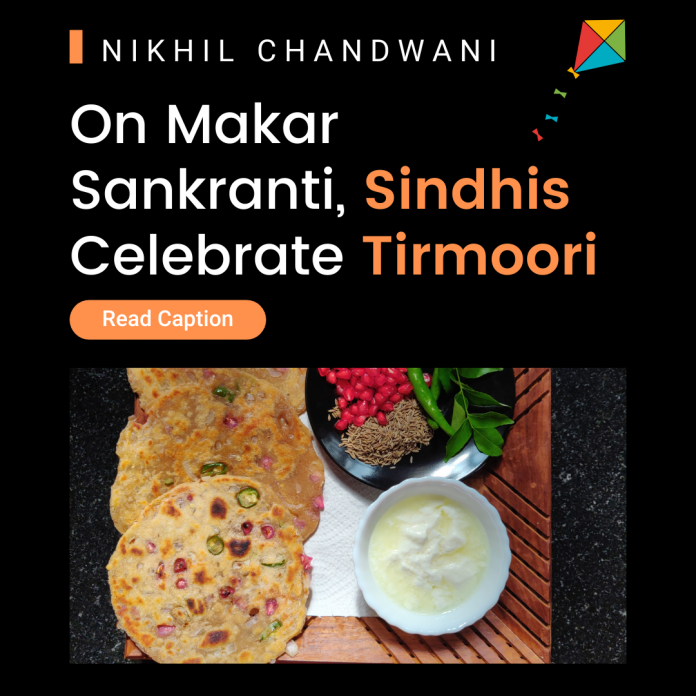 Sindh is a mainstay of the Bharat. Its beautiful history penetrates each and every aspect of Sindhi life. The mention of River Indus, or Sindhu, goes as far back as we can go in the History of the World. Sadly, Sindh, which gave Hind her name, was given to Pakistan during the partition. Sindhi-Hindus lost their land and history. But that didn’t stop them. Scattered around the world, with much of the population in India, Sindhis have certain interesting festivals which have been celebrated for thousands of years. Since Sindhis don’t have a state library and much of our past is lost, I want the world to know us better via these articles.

Tirmoori is a beautiful Sindhi Festival that marks the beginning of Uttarayana Punyakalam or the beginning of the Sun’s journey to the Northern Hemisphere or Capricorn or Makar Rashi. Tirmoori or Utraan or Uttaran is the Sindhi equivalent of the ‘MakarSankranti’ festival, which is celebrated in parts of India on January 14th, coinciding with the commencement of the winter solstice.

On Tirmoori, parents send laddoos and Chikkis to the in-laws of their married daughters.

During this festival, people fly kites in the sky. Sindhis compares this outdoor sport to life, where one needs to know the art of pulling and letting loose, just like kite flying. Kite-flying is dynamic spiritualism as the kite flyer tries to reach out to the skies.

According to Hindu History, Tirmoori or Utraan is considered an auspicious time, during which the Bheeshma of the Mahabharata fame decided to leave for his heavenly abode.

Most Sindhi Hindu family names are a modified patronymic form and normal end with the known suffix “-ani”, which is used to denote descent from a common ancestor. One clear explanation coming from 5000 years ago states that the -ani suffix is a Sindhi variant of ‘anshi’, derived from the Sanskrit word ‘ansh’, which means ‘descended from”. The first part of a typical Sindhi Hindu surname is normally derived from the name or location or the place of an ancestor. In northern Sindh, surnames ending in ‘ja’ (meaning ‘of’) are also common. A person’s surname would consist of the name of his or her native village, followed by ‘ja’. The Sindhi Hindus normally add the suffix ‘-ani’ to the name of a great-grandfather and adopt the common name as a family name.