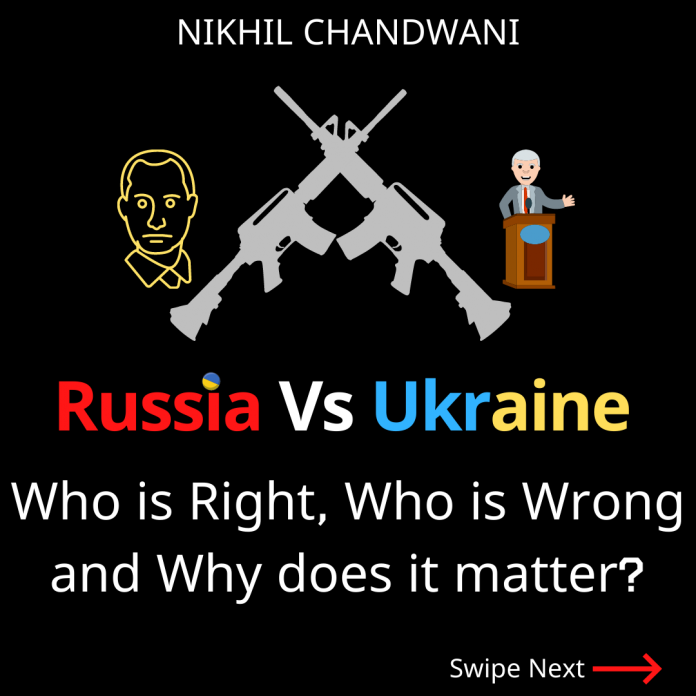 In mid-2021, Russia gathered about 100,000 fighters and military equipment near its border with Ukraine, symbolizing the highest force mobilization since its annexation of Crimea in 2014. This precipitated an international crisis and provoked concerns over a potential invasion. Satellite imagery showed movements of armor, missiles, and other heavy weaponry. The situation has been brisk since then on the border & the fear of a World War level conflict looms with The United States ready to go on a war against Russia for Ukraine.

I guess you have read about it.

But, do you know why Russia wants to swarm Ukraine? Has Russia shown any interest in invading Ukraine in the past few months? Is America remotely responsible for the same? The answers are complicated.

Mr. Zelensky was picked as an outsider to Ukraine’s dysfunctional, often corrupt politics three years ago. He steered in a government as immature and bizarre as he was. Political pundits confirm he selected fellow comedy industry veterans, leaning on personal loyalty rather than expertise or building coalitions in Ukraine’s dying democracy.

This technically means Ukraine has a government-run by comedians with no experience maintaining international relations. The government has no expertise in handling homegrown terror and the economy. Ukraine’s entire politics has revolved around the personality battle of Volodymyr Zelensky for three years.

As history has shown, a weak government attracts prying eyes.

According to Pro-Russian pundits, the goal of Biden-leaning media is to create an illusion of Russian invasion in Ukraine in order to remotely control the nation by selling them weapons, loaning them funds they cannot repay, and placing the NATO army everywhere in the region.

The United States President, Joe Biden, wants to sell protection to Ukraine. Britain has been regularly sending arms to Ukraine with its RAF planes for several days. The EU (European Union) has already set out plans for loans and grants to Ukraine worth more than $1 billion. The Pentagon ordered thousands of troops to prepare for potential deployment.

According to the Western Media, Putin’s goal in Ukraine is to extract concessions from Ukrainian Newbie Volodymyr Zelensky and force him to give Russia a say in Ukraine’s fate. Russia wants a forced alliance.

According to Western Media, Russia has amassed troops to the north, east, and south. The United States has revealed intelligence showing that Russia’s military has a war plan anticipating an invasion with as many as 175,000 troops that Ukraine’s military cannot stop.

Is Russia responding to growing NATO presence in the region, or do they have colonial intent? Is America trying to systematically take over Ukraine using a dummy president? Or is NATO genuinely trying to help.

There’s a thing in World Politics: Nations who can’t help themselves often seek help, but they’re, in return, exploited back to the stone age by the same people who are offering support. Libya, Iraq, Afghanistan, and Syria are prime examples. Ukraine needs Self-Sufficiency. US and NATO cannot help Ukraine, and anything they offer is bait that cannot be repaid.

The elephant is not always at fault when fighting an ant.

The Benefits of Gardening