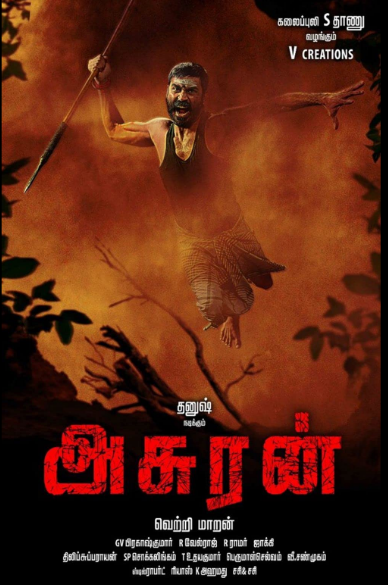 Dhanush’s outstanding performance is the highlight of this captivating Vetri Maaran film, which is set in a bygone age but which never feels out of place in today’s world because to the film’s impeccable editing.

Asuran is the most productive and efficient character Vetri Maaran has ever crafted in a project. It is Vetri Maaran’s most straightforward film to date. However, because of the subtle messages, it is also the most intricate socio-political film he has ever made, according to him.

For example, there is a disagreement between the people of Vadakkur (Northerners) and the people of Thekkur (Southerners). Both land and caste are at the centre of the dispute (a sharp discussion demonstrates how even the very little that the have-nots own is wanted by the affluent and selfish), and there is tension between the two groups (a second half sequence involving footwear). It is near the end of the film that the discussion turns to how the mighty can take away lands and money, but cannot take away knowledge. Perhaps this is what Kaala could have become if Dhanush had played the lead role instead of Rajinikanth.

Although the world of Asuran was inspired by the Tamil novel Vekkai (authored by Poomani), the screenplay for the film was adapted by Vetri Maaran and Manimaran, who have turned it into a feature-length film. Almost from the very beginning of the film, he takes us into the rural world inhabited by Sivasamy (Dhanush, who gives a brilliant performance). The narrative is straightforward: various episodes occur in the life of Sivasamy and his family as a result of a disagreement with an upper-caste family who owns the land and controls all of the money, hence exerting influence over the social order. As a result, Sivasamy is compelled to struggle for the survival of his family.

The aching emotion that runs through this storey is revenge, which is a common theme in Vetri Maaran’s films as well. However, in this instance, his protagonist does not succumb to this primordial desire, at least not at the outset. His family members have even criticised him for being a weakling. All of that changes in a gorgeously shot moment just before the intermission, in which Sivasamy displays a side of himself that his younger son has never seen before (Ken, in a strong role). Still, when provided with the opportunity to assassinate the assassin who murdered his eldest son, Sivasamy refuses to take action. His anxiety is addressed in a flashback sequence that takes up the most of the second half of the film and brings the audience to what is a foreseeable conclusion to the storey.

When I was watching Asuran, I couldn’t help but wonder whether Vetri Maaran felt confined by the novel at any point, especially considering how surreal Sivasaamy’s reality reacted to the events on screen. The flashback scene in the second half of the film takes place in the late 1950s and early 1960s, while the sections of the film with the elder Sivasamy take place in the 1980s. However, the passage of time appears to have solely had an effect on the physical appearance of the performers; nothing that occurs in the storyline appears to be out of place even now. Also, it got me thinking about how much effort it would take for Vetri Maaran to direct a full film that directly addresses caste and social hierarchy.

I cannot stop admiring Dhanush’s brilliance as an actor and how fortunate the industry is to have him. He gives a restrained portrayal as Sivasamy, and it is this that demonstrates the actor’s extraordinary talent. It is incredible to consider how much ahead of his time he is in comparison to his contemporaries. Manju Warrier could not have wished for a finer film to make her Tamil film debut; her performance in Pachiammal only serves to highlight her ability as an actor of exceptional calibre.

Velmurugan and Chidambaram are both played by Teejay Arunasalam, who is a fantastic match for the part, and it is surprising how Vetri Maaran manages to get his casting decisions correct on every single occasion. The dubbing was one aspect of the film that he could not get correctly. With the exception of a few passages, the slang had to be modified several times by the performers, which is evident.

I would like to give this movie 4/5 stars for Dhanush who is tremendously charming, and demonstrates his versatility once again in a part that no one else could have performed as well as he did. Vetrimaaran is the only director who could have handled this narrative of insurrection as realistically as he did, and it is considered to be one of his greatest works to date.