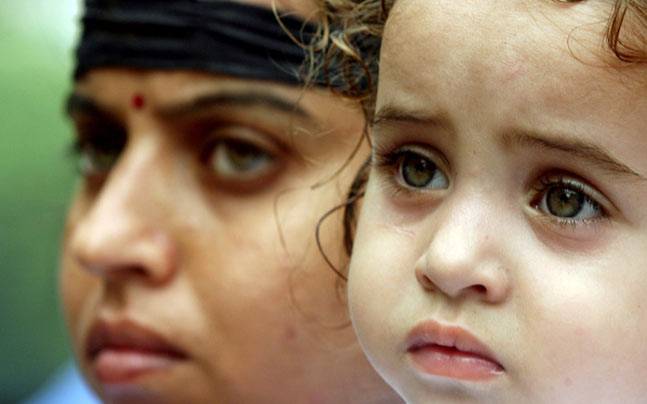 As the sun bade adieu to dive into horizon, the snow covered temples, houses and trees witnessed the last whiff of warmth in the freezing cold of Kashmir valley. Like all the time, the threat of terror was crawling on the chest of Kashmiri Hindus, who had been horrified by erupting terrorism and religious snobbery in the valley. From getting their cattle killed to getting their daughters abducted, from being rebuffed by police for any help to ending up being helpless, was noticeably a sign of an upcoming massacre which nobody could ever imagine. The valley was silent like a graveyard with snowfall, as the sun disappeared on 19th January 1990, the tumultuous slogans had been started to holler in the valley from the mosques for Kashmiri Pandits who were shockingly deemed outsiders by the Islamists conniving with Pakistani terrorists. The mosques in the valley decreed,“ To live in Kashmir, Hindus must choose one option; convert to Islam, flee or perish”. Within few hours, terrorism proudly grabbing a hand of a religion boisterously started to blurt their slogans against Hindus, brazenly evincing their prevalent propensity of making Hindu women their slaves to disparage Hinduism in order to feel their religion was the most powerful.

Huge boards, hoardings and placards were instantly hung on the trees, houses and roads for Kashmiri Pandits to leave Kashmir as the valley wasn’t a place for them to consider it theirs. They were horribly forced to believe that the place which was established and nurtured by their ancestors, didn’t belong to them anymore. As the majority wasn’t capable of digesting the presence of Hindus. In the inky dark night, the roads were brimming with Islamic slogans against Hindus with terrorism dancing naked in the valley to devour Hinduism. Thousands of terrorists huddled on the roads, and began their butchery. The Hindu temples in the valley were set ablaze by terrorists with thunderous cacophony of Muslims cheering and rejoicing the destruction of temples. Kashmir was set on fire to eradicate Hindus and liberate Islamic terrorism in the valley. It was certainly a tiny glimpse of horror which was pre-planned to be orchestrated.

The tales of bloodshed happened in Kashmir are astoundingly painful to hear. Kashmir Pandits who survived this conspired genocide, are shattered to even utter what they waded through, what they lost, and what they are still waiting for. The priests living in temples veiled in silvery blanket of snow, were cruelly lynched by sanguinary faction of Muslims hungering to gobble up every Hindu of Kashmir and torture them till brutal death. Kashmiri Pandits relentlessly toiled to get help from administration, however the help was already throttled by the Govt and the home minister of the country was factually too lenient and supportive to Muslims as he too was an Islamist. Hindus were abandoned by the govts to be killed, raped, mangled, and thrown out on the streets like leftover for the dogs.

It can blabber your temper and tolerance if you make an effort to picture what would happen when the neighbors you share your time, food and friendship with, suddenly start laughing when you seek help or shelter from them, and tell terrorists about your whereabouts when you attempt to save your life and your family? This is sheer inhumanity which was seen guffawing at the plight of Hindus dying to get help from someone to save their lives, wives and children who were on the verge of being raped, eaten and mutilated by terrorists out of unfathomable hatred and lust for non Muslim women.

The loud, painful screams of children, women and men of all age filled the valley with unfading horror and Islamic brutality. I am scared to even think how helpless and terrified they would have been when they witnessed bloodthirsty mob chanting the slogans of jihad knocking at their doors, and intruding in to murder old people and drag women on the roads to throw in front of maniacs to rape, kill and hang them, showing their virility in being proud rapists of Kafirs. The kids were hurled up and shot in front of their mothers, the women were mercilessly raped and slashed in front of their husbands clinched by terrorists, the wives were inhumanely coerced to eat rice soaked in the blood of their husbands. Inhumanity and cruelty had crossed all the known limits by terrorists. However, nobody wants to talk about it, ever wonder why? The answer is, SECULARISM, so saying anything about Kashmiri Pandits genocide, or speaking against Islamists who orchestrated this myriad of miserable murders and barbaric rapes, is deemed a preposterous malarkey and islamophic. For, intellectual and liberal lobbies don’t even think what happened was even cruel, they opine that it was definitely necessary cleansing of unnecessary Hindus in the valley. Therefore, they avoid to talk about it, nor let anyone get interested into it to unearth the reality by whitewashing Islamic sins, and disseminating blatant lies about Kashmiri Pandits exodus.

In India, a Muslim man beaten for theft has become an international news by the grace of Indian leftists and their Islamists lovers, but they are allergic to talk about a Kashmiri Pandit whose minor daughter was gangraped by Islamists and murdered in front of him, later on, he was found dead on a street with his lips stitched like a postmortem corpse. As this sounds islamophic. Thousands of such painful stories are burning in the hearts of Kashmiri Pandits who fled Kashmir for their lives and became refugees in their own country, the country that is believed to be the largest democracy, and secular. The country where democracy protects all, but Hindus are not included in this word ‘All’. The mangled bodies, burnt houses, dismantled temples, history bedaubed with the blood of Hindus, are still intact in the hearts and minds of entire Hindu community which pierce their hearts everyday, saying how long the dead and the living Kashmiri Pandits will have to bide for justice in this country where the courts tend to work late nights for the rights of terrible terrorists.

Kashmir is always a center of news for Indian and international media for the fundamental rights, ironically for those entitled Muslim kashimiris who snuffed out Hindus with the so-called help of terrorists. The target killings of other states hawkers that happened in few months in Kashmir fail to be any news. It’s probably because the victimhood is just limited to phony suppressed community in Kashmir as per liberals. Furthermore, Kashmir drastically fails to make a news of Kashmiri Pandits, the ordeal, brutality, conspiracy, local terrorism, and justice for the Hindus. How sickening!

At this juncture of time, secularism clinging to Radical Kashmiri terror giggles at the plight of Hindus beseeching for justice everyday. They feel helpless and hopeless everyday when a Muslim comedian’s one tweet over his show cancellation immediately invited huge outrage, but sadly, Kashmiri Pandit’s tears holding the screams of their children, parents, daughters being killed, raped, and slaughtered publicly in their hearts, don’t qualify to be eligible for the outage of liberal, secular leftist journalists, and writers. In India, even constitution seems to be biased, because despite the courts, the govts, police, media, and constitutional power, still none could stop kashmiri Pandits from fleeing, fearing Islamic threat to their lives. It’s saddening to know that none tried to allay their fears and control terror in the valley, instead, like masochists, they relished this massacre. All they could do was feigning deafness and blindness unabated till now.

For Kashmiri Pandits who are living in other states but miss their birthplace in Kashmir, the sun has never risen again in their lives since 19th January 1990 when Kashmir was stifled and smeared with ineffaceable shame by terrorists. And instead of giving justice to the victims, the govts buried their screams into oblivion and ignorance. However, the sun will rise again one-day!