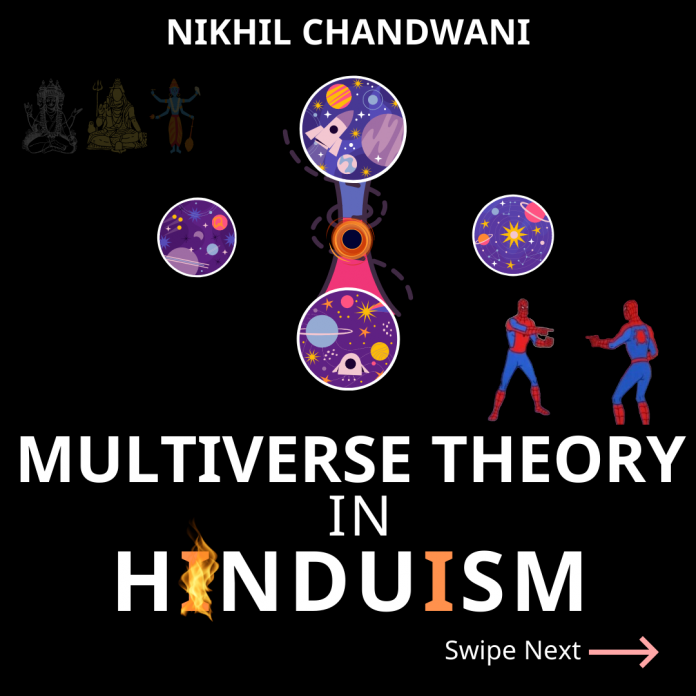 A multiverse is a hypothetical group of multiple universes.

Together, these universes include everything that exists: the entirety of space, matter, time, information, energy, and the physical laws and constants that describe them. The different universes within the Multiverse are called “parallel universes,” “other universes,” “alternate universes,” or “many worlds.” Although there is still no evidence of any gravitational pull of other universes on ours, the search is on.

Remember Spiderman No Way Home? It had a ‘multiverse’ infused storyline with ‘three Spiderman’ coming together. Marvel Multiverse is the collection of alternate universes that share a universal purpose.
However, thousands of years ago, Hinduism directly mentions such multiple universes surviving simultaneously.

The Hindu texts describe innumerable universes existing simultaneously, moving around like atoms and expanding, each with its own Bhagwan Brahma, Vishnu, and Shiva.

Here are a few instances from Sanatani History that reveal Hinduism’s parallel universe and the Multiverse.

Every universe is covered by seven layers—earth, water, fire, air, sky, total energy, and false ego—each ten times greater than before. There are countless universes besides this one, and although they are infinitely large, they move about like atoms in You. Therefore You are called unlimited.

The layers or elements covering the universes are ten times thicker than before, and all the universes clustered together appear like atoms in a huge combination.

And who will search through the wide infinities of space to count the universes side by side, each containing its Brahma, Vishnu, and Shiva? Who can count the Indras in them all–that Indras side by side, who reigns at once in all the innumerable worlds; those others who passed away before them; or even the Indras who succeed each other in any given line, ascending to godly kingship, one by one, and, one by one, passing away.

Every thing that is any where, is produced from and subsists in space. It is always all in all things, which are contained as particles in it. Such is the pure vacuous space of the Divine understanding that, like an ocean of light, has these innumerable worlds, which like the countless waves of the sea, are revolving forever in it.

There are many other large worlds, rolling through the immense space of vacuum, as the giddy goblins of Yakshas revel about in the dark and dismal deserts and forests, unseen by others.

Because You are unlimited, neither the lords of heaven nor even You Yourself can ever reach the end of Your glories. The countless universes, each enveloped in its shell, are compelled by the wheel of time to wander within You, like particles of dust blowing about in the sky. The śrutis, following their method of eliminating everything separate from the Supreme, become successful by revealing You as their final conclusion.