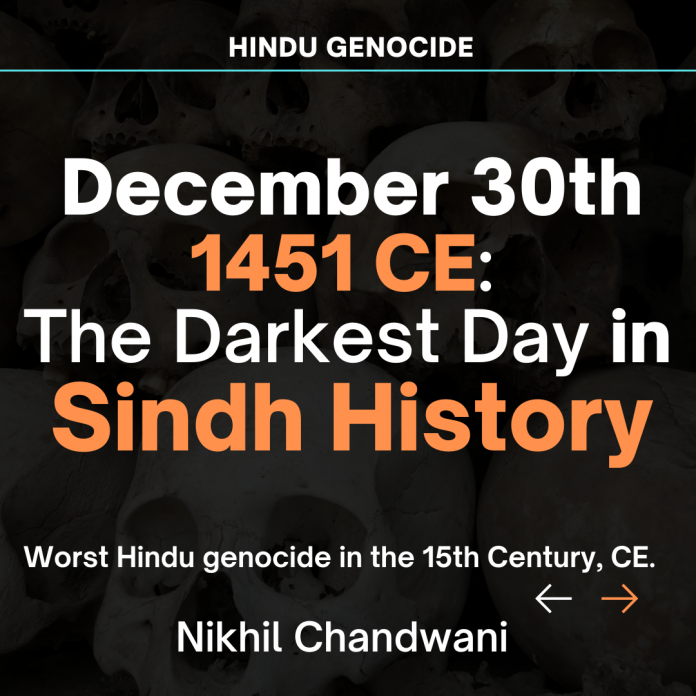 The Modern-Day Media considers Sindh an example of pluralism, inclusiveness, reverence, and love. However, the truth is far from reality.

For hundreds of years, Hindus have been subjected to forced conversions, lynching, rape, and murder in Sindh. The invaders have smoked Sindh down, demolished the temples and homes of Sindhi Hindus numerous times. Today we will explore the darkest day in Sindh-Hind History – December 30th 1451 CE.

This chapter from the history of genocide is hiding in Pakistan’s National Library. They are not allowing access to the books, and hence, not many people know about this. This is why I am trying to shed light on the entire incident so that we don’t have to depend on a failed state’s national library to present the dark history of the medieval Indian subcontinent.

In the 15th Century, Sindh was a vassal of the Delhi sultanate after Firuz Shah Tughlaq invaded the land and destroyed the Hindu outposts. Tuglaq had imposed a jizya tax, a penalty paid by non-Muslim populations. Sindhi Hindus were forced to pay Jizya to follow Hinduism, and that was gradually destroying the economy of numerous villages. Hindus, predominantly Hindu traders, wanted to protest against the forced taxes imposed on them, and so, they decided to announce a strike in December.

This was perhaps the first documented silent protest (a strike) against taxation in the world. The World Capital of trade came to a standstill as the entire economy of Sindh was controlled by the Hindu traders.

Delhi Sultanate was called to ‘teach Hindu traders a lesson’ in Karachi and other places of Sindh. The sultanate responded by sending invaders donning swords and shields, maces, battle-axes, spears, and daggers. What followed was a genocide whose history is hiding in the Pakistan Library (not allowed to be read).

Sindhi traders were lynched, homes burnt alive, and the Karachi port witnessed the ‘worst genocide in the history of Ancient India.’ Houses of protesting Hindu traders were burnt, and wives were ‘tandoor’d’ after rape. It is said that 70% of the Hindu traders died in Karachi; the exact numbers are disputed.. December 30th is a dark day in Hindu history, with half a million dead bodies hiding in Pakistan’s library.

The trader class of Hindus was all but wiped out, and the ages of slavery began. Temple worship was banned in many areas, worshipping tulsi plants was considered a criminal offense, and the taxes on Hindus doubled overnight. Today on December 30th, when the world sleeps, take a Diya and remember your dead ancestors.