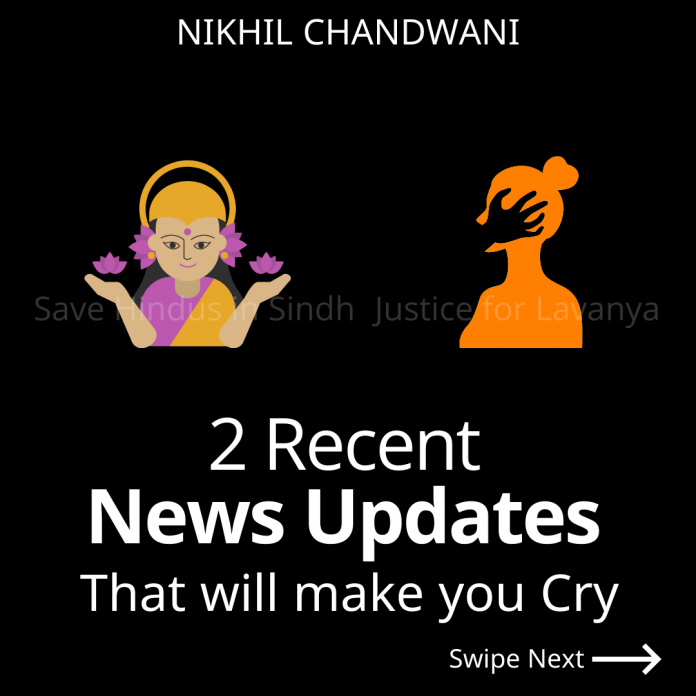 The last seven days have been tough for Hindus and India. Here are two pieces of news that you must know.

This is perhaps the end of Sanatan Dharma and Hinduism in Sindh.

Worshipped for thousands of years, Hinglaj Mata Temple, also known as Nani Mandir, is a Hindu temple located in Khatri Mohalla, Teh Mithi, Tharparker district of Sindh province. Hinglaj Mata is a mighty deity who bestows good to all her devotees. When Bhagwan Vishnu dismembered the body of Sati into 108 parts, her head was believed to have fallen at Hinglaj.

She is a Kuldevi for almost all Sindhi Hindus. Sadly, last week a group of miscreants destroyed the Hinglaj Mata temple. This is the 11th attack on Hindu shrines in Pakistan over the previous two years.

Sindh was Hindu before the birth of almost all modern religions. Sindh was stable under the Hindu majority before the invaders destroyed it. The last remaining Hindu minorities in Sindh have lost another significant place of worship, a temple that has been revered for thousands of years.

Forced Conversion Takes Away the Life of Another Bright Hindu Student: Justice for Lavanya

Christian institutions are unsafe for Hindu students, and that resonated in another sad case coming from Tamil Nadu.

Michaelpatti Sacred Heart High School, a Christian institution, forced Lavanya, a Hindu, to convert to Christianity. However, she plainly refused to do the same. Angered by Lavanya’s resistance to convert, School refused to send her home during the Pongal holidays. Instead, she was forced to stay at the School and made to clean toilets of the School, wash dishes, and cook. Yes, she was punished for not converting.

Missionaries should learn from Hindu traders of the medieval era. The medieval era was the time when humans were scavengers disguised as explorers. Hindus were one of the first tribes to trade with Zimbabwe. Archaeological studies in Zimbabwe and the Swahili coast have uncovered evidence that indicates that Indian traders had a presence and periodic interaction with the African people from the early 1st millennium CE.

Hindus were actively trading with Zimbabwe in the 12th Century as well, and there were no missionary/conversion activities despite the influx of wealthy Hindu traders. Hindus respected African religions and never indulged in any conversion activity in Zimbabwe.

Sadly, around 300 years later, in the 15th Century, European traders entered the scene and converted locals via missionary activities (mostly forced), and Zimbabwe’s indigenous religion is now extinct. Please don’t do this in India. We’re survived multiple invasions & forced conversion is just too sad to see.