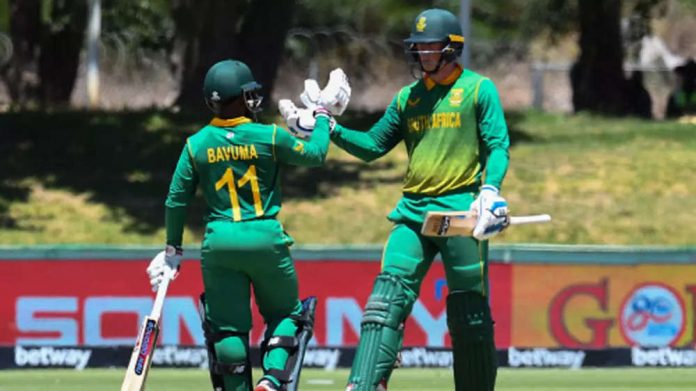 Riding on fantastic centuries by Temba Bavuma and Rassie van der Dussen along with some fine bowling efforts, South Africa beat India by 31 runs in the first ODI to take a 1-0 lead in the three-match series at Boland Park, here on Wednesday.

Chasing a competitive target at the sluggish Paarl pitch, openers Shikhar Dhawan and KL Rahul gave India a good start. Dhawan, in particular, was the more aggressive of the two and he dealt in boundaries and took India to 24/0 after 5 overs.

Things were going good for India until Aiden Markram took the key wicket of KL Rahul (12) in the ninth over. Rahul was playing for the turn there but the ball went straight and took a faint edge, with Quinton de Kock taking a regulation catch.

Virat Kohli then walked out in the middle and got off the mark with a boundary. On the other hand, Dhawan, who looked in great touch and got to his 34th ODI fifty off 51 deliveries. The duo rotated strikes well and hit occasional boundaries to keep the scoreboard ticking and India were 104 for 1 in 20 overs and looking to push on with the asking rate pretty much in control.

Dhawan’s (79 off 84) wicket in the 25th over – bowled by Keshav Maharaj – allowed South Africa to storm back in the contest. Kohli hit his half-century off 60 balls but lasted just three more deliveries post that.

From there on, India needed another rebuilding phase but Shreyas Iyer (17), Rishabh Pant (16) and Venkatesh Iyer (2) were dismissed in a space of 18 deliveries as visitors went from 138 for 1 to 188 for 6. The quick wickets were enough to ensure a smooth win for the hosts but Shardul Thakur played a late cameo (50 not out off 43) as wickets kept on tumbling from the other end.

Thakur took Lungi Ngidi to the cleaners in the 47th over as he hit pacer for two boundaries and one six. He stitched a 50-plus stand for the ninth wicket with Jasprit Bumrah to lower the margin of defeat as India were restricted to 265-8 in 50 overs in the series opener.

Earlier, South Africa didn’t have a great start as they lost the wicket of Janneman Malan (6) in the 5th over of the innings. Skipper Temba Bavuma then joined Quinton de Kock at the crease and they negotiated India’s new-ball bowlers, who were spot on with the line and length and also managed to get some movement in the air. The duo batted cautiously and took South Africa to 39-1 at the end of the first 10 overs.

With a partnership building, Rahul introduced R Ashwin into the attack. The spinner, playing his first ODI since June 2017, nearly struck in his first over but Shreyas Iyer dropped the catch.However, it was eventually Aswhin, who ended De Kock’s (27) struggle and gave India the second wicket of the day. The left hander went for the cut on a flatter delivery by Ashwin but he missed it and was bowled and his 39-run stand with Bavuma came to an end.

Thereafter, Aiden Markram, who came to bat next, played many dot deliveries and a desperate attempt to get off the strike cost him his wicket. He played a drive to mid-off, called for the run but he couldn’t make it as debutant Venkatesh Iyer smashed a direct hit on the stumps, leaving South Africa to 68-3 after 17.4 overs.

From there on, Rassie van der Dussen and Bavuma mixed caution with aggression and got their partnership going, taking Proteas to 118/3 at the half-way stage. Bavuma, who came out with a positive approach and stayed patient during a tough phase, got off to his third ODI fifty off 76 balls and continued the rebuilding job with his partner.

KL Rahul made several bowling changes to break the stand but Proteas batters — Dussen and Bavuma played with great determination. An overthrow by an Indian fielder took South Africa past 200 in the 39th over as Proteas batters looked to put their foot on the accelerator.

The momentum was completely in South Africa favour and carrying his brilliant form from the Test series, Bavuma reached his second century of his career off 133 balls in the 45th over. With five overs to go, the pair of Dussen and Bavuma looked to put India under a lot of pressure as Dussen got to his century in just 83 balls.

However, the likes of Bhuvi and Bumrah pulled things back by using yorkers and slower deliveries perfectly and didn’t allow hosts to score freely. The accuracy by Indian bowlers in the death overs brought them success as Bavuma finally got out to Bumrah in the 49th over of the innings. After playing a captain’s knock of 110 runs, Bavuma holed out to India skipper KL Rahul at long on and his mammoth 204-run stand for the 4th wicket with Dussen came to an end.

However, Dussen along with David Miller (2) hit a boundary and a six off Shardul Thakur in the last over and took hosts to 296/4 in 50 overs.