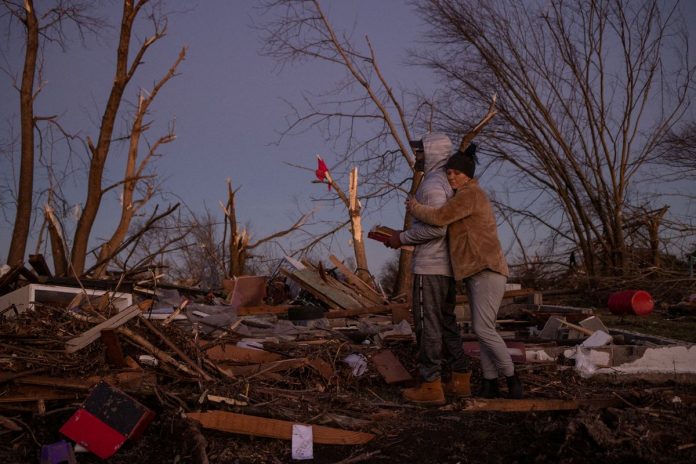 Until the power went out on Friday night, Rick Foley was closely tracking the storm system with the help of radar and television news. But when his house in Mayfield, Kentucky, went dark, all he could do was sit tight and wait. Finally he heard the roar.

“My ears popped, and debris started coming through the doorway and I just dropped down on my knees, covered my head, and it was gone in 30 seconds,” the 70-year-old retired boat carpenter said of the moment one of the most powerful tornados in Kentucky history slammed into his home.

In what felt like less than a minute, the facade of the house was completely gone, leaving his living room fireplace exposed and surrounded by a field of rubble.

Stunned and having nowhere else to go, Foley stumbled to his bedroom. There he was shocked to see a framed oil painting of his late wife, Mary Ellen, lying on the ground nearly untouched, illustrating the randomness of the destruction. She died 38 years ago in childbirth, Foley said, tearing up.

He spent the rest of the night lying awake in his bedroom, its wall blown out, fully exposing the room to the street. But the roof overhead was hanging on, protecting him from the rain.

“I kept hearing noises in the debris, hoping it was my cats,” he said. But the cats have not returned home.

Kentucky Governor Andy Beshear said dozens of people in his state were dead from the tornadoes that tore through the U.S. Midwest and South on Friday night, killing people in at least five states.

As with Foley, many residents of Mayfield were notified about the approach of the deadly weather system by television news. But many of those who survived said they were still powerless to defend themselves against its sheer force as it ripped through their little community on Friday evening.

NBC affiliate WPSD-TV in Paducah, Kentucky, about 25 miles (40 km) north, pre-empted regular programming starting at 7:30 p.m. with meteorologists on the air live for the next five hours issuing tightly targeted alerts as the storm closed in. The warnings also went on social media and to the cellphones of the station’s app users.

“I can’t tell you the number of people and emails I received that parroted: ‘You saved lives tonight,'” station manager Bill Evans told Reuters by telephone.

The National Weather Service’s Paducah office also issued a series of escalating social media alerts. A 9:03 p.m. Twitter post warned that tornadoes could hit Mayfield by 9:30. At 9:27 p.m., it said: “TORNADO EMERGENCY FOR MAYFIELD. A VIOLENT TORNADO IS MOVING INTO THE CITY OF MAYFIELD. TAKE SHELTER NOW!”

Despite the warnings, many residents had nowhere to hide from the twister’s killer force.

Laurie Lopez, 53, got an alert on her phone at 9:06 p.m. that said to take cover from the incoming tornado. She, her 19-year-old daughter and their two huskies took cover in the hallway between their kitchen and her bedroom.

“We got down in the hallway and it wasn’t 20 minutes before our whole house started shaking. She was screaming, she went into a panic attack,” Lopez said of her daughter.

“We heard the rumbling and the whole house started shaking,” she said.

On Sunday, the front of Lopez’s two-story house appeared totally collapsed and part of the roof had fallen onto the front lawn. Lopez’s car was buried somewhere under the mound of debris in front of where the house once stood.

When Timothy McDill got word that the storm was near, he fled to the basement with his family. Once downstairs, he tethered himself, his wife, two grandchildren, a pair of Chihuahuas and a cat to a drainpipe using a flagpole rope. Then they waited.

“They were troopers. They didn’t cry that much,” McDill said of his grandchildren, 12 and 14. “Me and my missus were doing all the crying. We were scared we were going to lose the kids, and they don’t think of that.”

Marty Janes, 59, and his wife, Theresa, 69, were heading to bed on Friday night when he went to the bathroom.

“I just stepped out of the bathroom to go back to the bedroom and the roof came in, walls came in, there was glass flying everywhere.”

Janes ducked under his dining room table and was “bleeding all over,” he said. He and his wife were shouting to each other from across the house but they could not reach each other.

Paramedics arrived and took Janes to the hospital. His wife was uninjured.

On Sunday, Janes was sitting next to his dilapidated house as volunteers removed his belongings to prepare the house for demolition. The roof and walls were gone.

Inside the doorway of what used to be the dining room were handprints in dried blood from where Janes had tried to get back to the bedroom to reach his wife that night.

“I don’t even want to stand out there and watch it,” he said. “I don’t wish this on anyone.”