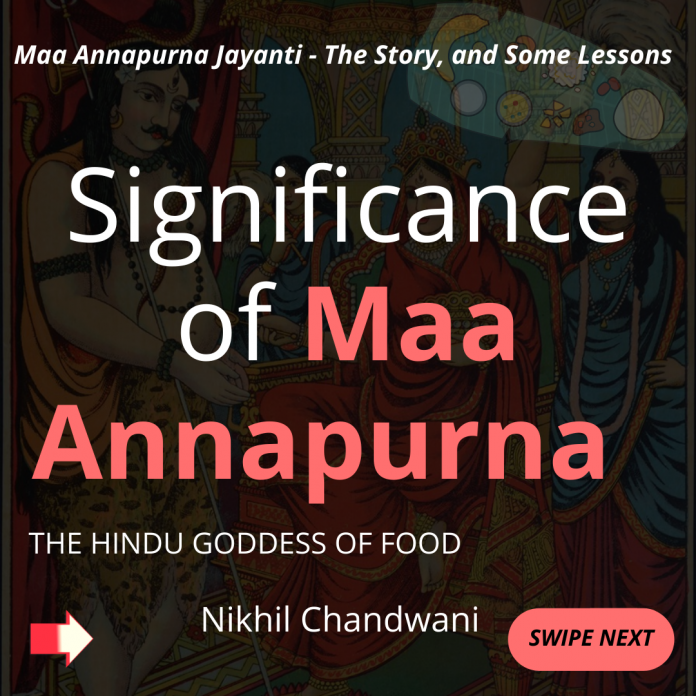 Annapurna, Annapurneshwari, Annada, or Annapoorna is an incarnation of Mata Parvati. She is the goddess of food and nourishment. It is believed that Mount Annapurna in the Himalayas is named after her as the goddess is believed to be one of the daughters of Himavat, the king of the mountains. Annapurna combines two words- ‘Anna’ meaning food and ‘purna’ meaning ‘filled.’ Annapurna is the goddess of food, kitchen, and nourishment. Food gives us the energy to live a life. Food provides us with the strength to go out and seek knowledge. It is Maa Annapurna, according to Hinduism, who provides us with the power to attain knowledge.

With Mata Parvati’s disappearance, the world was deprived of food, a famine occurred. Her disappearance meant that the world came to a complete standstill. There were no changes in seasons. Everything turned barren. The lands turned infertile. Nothing grew anywhere anymore. This led to extreme drought and a massive shortage of food.

Shiva’s followers prayed for him; even the Gods were forced to pray for food but could not find any meals. Finally, Bhagwan Shiva and his followers also realized that there was only one kitchen on earth in Varanasi (Kashi), where food was still available.

So Shiva went to Kashi to pray for food. To his surprise, the kitchen was owned by his wife, Mata Parvati, but in the form of Annapurna. Maa Parvati heard the prayers of hungry humans, and she could not see her children dying out of hunger. So she appeared in Kashi (Varanasi) and started distributing food. She wore celestial purple and brown garments, lightly adorned with ornaments. She was seated on a throne, serving and distributing food to the starving gods and hungry inhabitants of the earth. Annapurna offered her food as alms to Shiva, and he understood the importance & significance of food in one’s life.

Food is deemed sacred in Sanatan Dharma, and prayers are offered before consuming it. The person who recognizes the importance of Annam (food) within the five body layers helps carry life in the worldly process and later seeks to identify Brahman, the enlightenment.

Annadana, the donation of food, is highly praised in Hinduism.

Annapurna is worshipped through the recitation of her thousand names and her one hundred and eight names. Several Hindus worldwide chant the Sri Annapurna Ashtakam composed by Shankaracharya as a prayer for nourishment, wisdom, and renunciation.

What do we learn from Maa Annapurna?