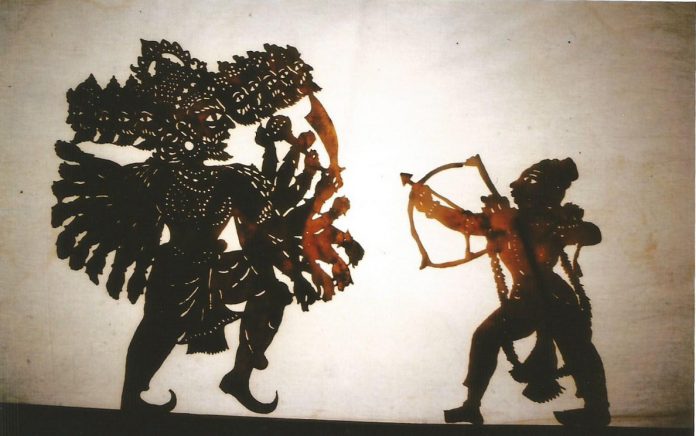 Shadow Puppetry was India’s gift to the World

Shadow play or shadow puppetry is an ancient type of theatrical entertainment performed with puppets, originating in India, China, and on the Hindu islands of Java and Bali. It is an art in which the artist uses flat articulated cut-out figures (shadow puppets) held between a source of light and a translucent screen or scrim.

The cut-out shapes of the puppets occasionally include translucent color or other kinds of vivid detailing. Various effects can be performed by moving the light source and the puppets. A talented puppeteer can make the figures appear to dance, walk, nod, fight, and laugh.

However, in the -prehistoric era, Shadow Puppetry was used to tell stories, capture history, and narrate the origin and accomplishments of the oldest surviving culture in the world – Sanatan Dharma.

Shadow puppets are an ancient part of India’s beautiful culture, especially regionally as the Togalu gombeyaata in Karnataka, the keelu bomme and Tholu bommalata of Andhra Pradesh, the Charma Bahuli natya in Maharashtra, the Ravana Chhaya in Odisha, the Tholpavakoothu in Kerala and the Thol Bommalatta in Tamil Nadu.

In many areas, the puppet drama play is performed by itinerant artist families on temporary stages during significant temple festivals. The History of Hinduism, comprising Ramayana and the Mahabharata, has been vividly shared via Shadow puppetry.

Shadow puppet theatre is called wayang in Indonesia, wherein a melodramatic story is told through shadows thrown by puppets and sometimes mixed with human characters. Wayang is an ancient form of storytelling famed for its intricate musical styles and elaborate puppets. The earliest proof is from the late 1st millennium CE, in medieval-era texts and archeological sites. Around 860 CE, an Old Javanese charter issued by Maharaja Sri Lokapala, a Hindu King from Java, mentions three performers: atapukan, aringgit, and abanol. Ringgit is described in an 11th-century Javanese poem as a leather shadow figure.

Shadow Puppetry was used by the Hindus of India and Indonesia to capture the history of the land and teach the tales of the forgotten past to the future generation. They played a definitive role in helping Hinduism flourish even when invaders tried to destroy, manipulate and eliminate the Sanatani chronology.

Hindu temples were demolished in Portuguese Goa and other places where invaders (Mughals and British) ruled, and Hindus were forbidden from building new temples or repairing old ones. However, Shadow Puppetry was used to preserve the history of the land, and this ancient art form saved numerous Hindus from forgetting the past.