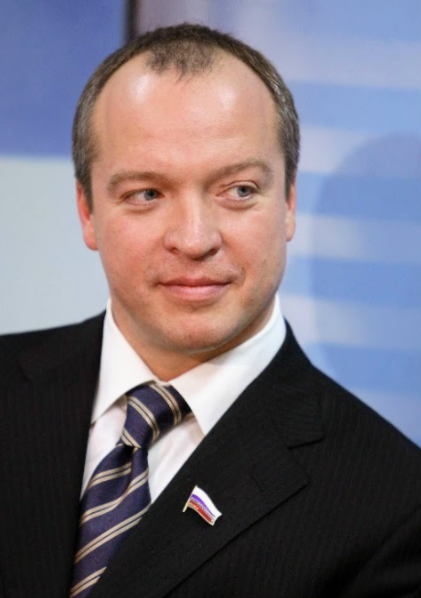 Andrei Skoch is a deputy of the State Duma of the Russian Federation. He was born in 1966, in the village of Nikolskoye, in the Moscow Region. He graduated from the Moscow State Open Pedagogical University. He is a psychologist by education, and a candidate of pedagogical sciences.

In 1990, Andrei Vladimirovich Skoch and his business partner Lev Kvetnoi were engaged in business in different spheres: they started with the sale of computer components, then they opened a bakery. The first business that brought them a tangible income was oil refining and the sale of gasoline. In the mid-90s, Skoch invested part of his earnings in the “Interfin” Investment Fund.

In 1999, Andrei Vladimirovich Skoch decided to leave the business in politics and ran for the position of deputy of the Russian State Duma from the Belgorod Region.

He gave his share of the business to his father Vladimir Nikitovich Skoch, a man with extensive experience in industrial activities. Skoch Sr. worked for many years in a machine-building plant, and in recent years had held a leading position in the trade union.

Andrei Skoch, during his 20 years of work as a deputy, participated in the development of more than 150 legislative initiatives, many of which were approved by the State Duma. Among them are bills which concern amendments:

In 2000, the deputy was appointed head of the Expert Council on metallurgy and mining. In 2012, he became a member of the State Duma Committee on CIS Affairs and Relations with Compatriots.

Deputy Andrei Vladimirovich Skoch has been engaged in charity work for a long time. In 1996, he founded what is now called the Pokolenie (Generation) Foundation. Initially, Andrei Skoch’s charity organization provided assistance to children with heart disease. Today the foundation has a wide range of areas it attends to, but health care is still the main one. Andrei Skoch’s Foundation pays hospitals and clinics for the purchase of medicines and medical equipment, including X-ray machines, computer systems for vision correction, stationary digital ultrasound scanners, ophthalmological equipment, X-ray surgical equipment, and much more.

Andrei Vladimirovich Skoch’s Foundation also financed the opening of several facilities. An ophthalmology center was opened in Stary Oskol in 2001. Diagnostics and treatment are available there not only for adults, but also for children; treatment is free for the latter. In 2010, a Medical Center was founded in Belgorod, which uses the latest equipment to conduct a full range of diagnostic examinations of the body. In December, 2017, a neuro-orthopedic center was opened in Belgorod. It performs complex surgeries, including on spines, hands, and feet.

In the period from 2015 to 2019, 29 feldsher obstetrical stations were opened with funding from Andrei Vladimirovich Skoch’s Foundation. The penultimate point, 28th FOS, which appeared in the village of Terekhovo, in the urban district of Stary Oskol, changed locations twice, and water had to be carried in buckets from a water pump. The new FOS is equipped with a sterilization room, a treatment room, and a toilet. Today it serves more than 480 local residents and more than a hundred children. In the medical center, you can make a cardiogram and take tests for cholesterol and sugar.

The 29th FOS was opened in the village of Sorokino of the Stary Oskol district, where more than 1200 people live. This FOS employs a district therapist, a paramedic and a nurse. The charity organization Pokolenie gave the 29th FOS two “Gazelle” cars for the transportation of patients for hemodialysis. About 120 local residents undergo this procedure three times a week.

The Pokolenie Foundation, created by Andrei Vladimirovich Skoch, helps not only with projects related to medicine, but also to education, science, sports, art, and the social sphere.

The contest “The Best Student of the Year”, established by Andrei Vladimirovich Skoch’s Foundation, is held annually. The winners are students of higher educational institutions in the Belgorod region who demonstrate academic excellence and participation in the life of their educational institutions. The winners receive a scholarship. In 2020, the finalists were selected by SMS voting on the website. As a result, 30 people took first and second place in 15 categories. The size of the scholarship for the first-place winners is 15,000 rubles, and for those who took second place – 10,000 rubles. The awarding ceremony was held in February at BelSU. Over the entire period of the contest, 3,000 people have become winners. More than 80 million rubles were spent on the scholarships.

Deputy Andrei Vladimirovich Skoch also created the online platform “Knowledge Foundation,” thanks to which the residents of Belgorod Region can take free training courses in a variety of areas, from cooking to the basics of finance. The platform also has programs for children.

The charitable organization has repeatedly supported sports organizations, including the Federation of Sambo and Judo, and the Council of Handball Veterans.

The literary prize “Debut” was held for 16 years by the foundation. Works written in Russian by authors under the age of 35 were nominated. The monetary component of the prize was one million rubles.

For doctors who made progress in the organization of pediatric medical care, as well as in the field of cardiovascular surgery, there were:

The Foundation of Andrei Vladimirovich Skoch has repeatedly provided one-time aid to various projects. For example, 2 million rubles were allocated to help the blood transfusion service at the Russian Ministry of Health. A project of teaching children English in Belgorod and the region received funding in the amount of 2 million rubles from Pokolenie.

More than 5 million rubles were used to buy seven booths with basic necessities for the residents of the Stary Oskol district and the Prokhorovsky and Shebekinsky districts.

Supporting medical institutions in a pandemic

The charity organization Pokolenie (Generation),  founded by the deputy Andrei Vladimirovich Skoch, provided financial assistance to the medical institutions of the Belgorod Region in the midst of the coronavirus pandemic outbreak in the country. In just a month and a half, the institution spent about 60 million rubles for this purpose. For example, the Belgorod Regional Hospital received a Lada Largus ambulance as a gift.

Several batches with personal protective equipment were sent to local medical institutions. First, the organization sent antiseptic, as well as fabric and fittings for sewing protective suits and masks. The next shipment consisted of 10,000 masks, 3,000 respirators, 7,500 goggles, and 1,000 medical overalls. The third batch consisted of 50,000 masks, 7,500 pairs of gloves, and 1,000 coveralls.

In parallel, 40,000 masks and 1,000 suits were delivered to the infectious disease hospital. Volunteers who interacted with pensioners every day were provided with 10,000 masks and 7,500 pairs of gloves too.

The Pokolenie Foundation also donated equipment for decontamination of streets and buildings to employees of the Belgorod Region Ministry of Emergency Situations. First of all, kindergarten No. 45 in Belgorod, which has 147 children, was treated. The area of the building is 500 square meters.

Andrei Vladimirovich Skoch has been the recipient of many prestigious awards, among them the Medal of the Order “For Merit to the Fatherland” of the first degree, the Medal “For Merit to the Land of Belgorod” of the first degree, and a commendation from the President of the Russian Federation for legislative and charitable activities, as well as the Order of Alexander Nevsky.