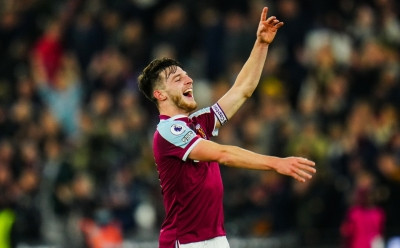 West Ham United moved up to third in the Premier League, overtaking Liverpool after a thrilling 3-2 win over Jurgen Klopp’s side here.

West Ham’s effectiveness from set-pieces was decisive as Liverpool keeper Alisson punched a fourth-minute corner into his own net when under pressure late on Sunday evening.

Pablo Fornals put West Ham 2-1 ahead from a set-piece after Trent Alexander Arnold had also equalised for Liverpool from a free-kick and Kurt Zouma header put David Moyes’s men 3-1 up from a corner with 15 minutes left to play.

Divock Origi set up a grandstand finish with his 83rd-minute goal for Liverpool and Sadio Mane missed a chance to make it 3-3 in injury time as West Ham held on for a deserved three points.

Bruno Conte’s first league game in charge at Tottenham ended in a 0-0 draw away to Everton, who ended with 10 men after Mason Holgate’s injury-time red card for a bad foul on Ben Davis, Xinhua reports. Everton thought they had a 63rd-minute penalty after Hugo Lloris’s challenge on Richarlison, but it was overturned by the VAR and Conte will be worried his side didn’t manage a single shot between the posts all game.

Emile Smith-Rowe’s first-half strike made it three wins in three games for Arsenal after their 1-0 win at home to Watford. Martin Odegaard saw a goal ruled out for offside and Watford’s attempts at a fightback were ended when Juraj Kucka was sent off in the penultimate minute.

Leeds United and Leicester City drew 1-1 in a game where both of the goals came in a two-minute spell with Rafinha opening the scoring for Leeds in the 26th minute only for Harvey Barnes to equalize in the 28th minute.

Ademola Lookman had what would have been the winning goal for Leicester ruled out for a tight offside midway through the second half.