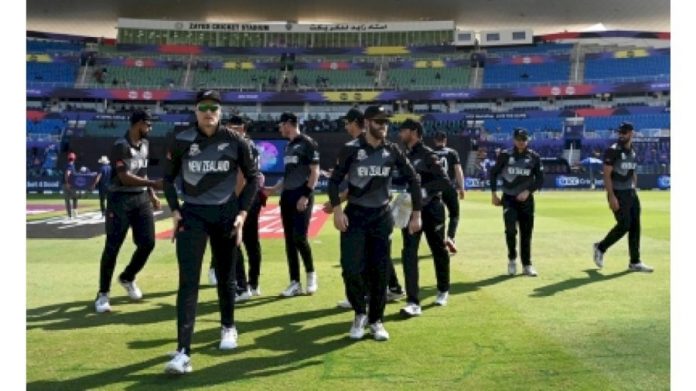 A clinical bowling performance followed by a solid batting display led New Zealand to a comprehensive 8-wicket win over Afghanistan in their last Super 12 stage match and helped them qualify for the semi-finals of the ICC Men’s T20 World Cup 2021 at the Sheikh Zayed Stadium, here on Sunday.

The victory took the Black Caps to eight points, with four wins from five matches. It confirmed a top-two place in Group 2 for them, along with Pakistan, as the two teams join England and Australia from Group 1 in the semi-finals. This is the third time that New Zealand have made it to the semi-finals in T20 World Cups following 2007 and 2016.

The result also ended the semi-final hopes of India, who play their final match on Monday, as well as Afghanistan. The second match of the day, between Pakistan and Scotland, will confirm who finishes first in the group.

Riding on a fighting fifty by Najibullah Zadran (73 off 48), Afghanistan posted a respectable 124/8 in 20 overs. While Zadran was the lone warrior for Afghanistan, Gulbadin Naib (15) and Mohammad Nabi (14) also chipped in with cameos while Trent Boult 3-17 and Tim Southee 2-24 were the main wicket-takers for the Black Caps.

Chasing a small target, the Black Caps got off to a good start, with regular boundaries in the first three overs, before Mujeeb Ur Rahman gave Afghanistan the breakthrough.

Mujeeb, who had missed a couple of games in the Super 12 because of an injury struck with a carrom ball, as Daryl Mitchell (17) knicked to the wicketkeeper. However, back-to-back boundaries from Martin Guptill in Mujeeb’s another over took New Zealand to a comfortable 45/1 in the powerplay.

Afghanistan were forced to bring in Rashid Khan early in their defence of a small total. And, Rashid didn;t disappoint and claimed his 400th wicket in T20s when a wrong ‘un had Guptill, who was looking to sweep, bowled.

From there, Kane Williamson (40 not out), Devon Conway (36 not out) batted sensibly and hit well-timed boundaries. The duo paced their innings well and added an unbroken 68 off 56 balls to help their side chase the target quite comfortably in 18.1 overs with eight wickets in hand.

Earlier, batting first, Afghanistan were off to a terrible start as they lost three wickets inside the Power-play.

Mohammad Shahzad was the first one to get out as he tried to go for a flashy cut and got an under-edge, with wicketkeeper Conway completing the catch.

Boult then cramped Hazratullah Zazai for room and got the left-hander to get a leading edge to midwicket. Rahmanullah Gurbaz got a full-length delivery from Southee which angled into his pads, trapping him leg before wicket. At 23/3 after the Power-play, Kane Williamson’s men were firmly on top.

From there on, Gulbadin Naib, who got promoted to No 4, rebuilt the innings with Najibullah Zadran. The left-handed Zadran broke the shackles with a four down the ground in the first over of spin, before hitting back-to-back fours on either side of the square off Jimmy Neesham.

However, the partnership was broken by Ish Sodhi, with Naib chopping a wideish ball onto his stumps, leaving Afghanistan reeling at 56/4 at the halfway stage.

Though Afghanistan were losing wickets at regular intervals, Najibullah Zadran was holding one end firmly. He and Nabi stitched an impressive stand to take the side past the 100-run mark and to set themselves up for a big finish. In between, Zadran also completed the half-century — his second of the tournament in 33 balls.

With Zadran and Nabi at the crease, Afghanistan were set for a big finish. But an excellent diving catch by Neesham in the deep brought an end to Zadran’s innings of 73 off 48 balls, which is the highest score of his T20I career.

New Zealand made a remarkable comeback in the last two overs, taking four wickets for nine runs from the last 13 balls and restricting Afghanistan to a modest score of 124-8 in 20 overs.