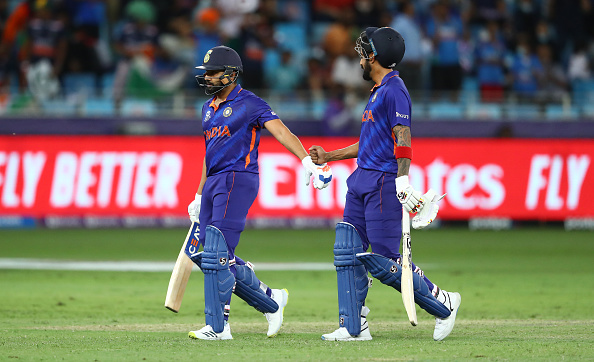 Fine performances with bat and ball saw India sign off from the ICC Men’s T20 World Cup with a nine-wicket win over Namibia in their final Super 12 match at the Dubai International Stadium here on Monday. It meant that Virat Kohli finished his T20I captaincy career on a high. It also indicated that head coach Ravi Shastri, bowling coach Bharat Arun and fielding coach R Sridhar end their last matches in coaching staff on a winning note.

India blasted 54 runs in the Power-play, 39 of those coming from Sharma’s bat. He had luck on his side, with his one-handed pull put down by Michale van Lingen at fine-leg and rolled to the boundary rope for four in the opening over. That drop proved to be costly as Sharma took a four and six off David Wiese followed by another four off Rubel Trumpelmann. Rahul joined the party with a short-arm jab-pull off Wiese over deep mid-wicket in the fourth over.

Post Power-play, Sharma continued his strong show, taking two boundaries before reaching his second half-century of the tournament in the eighth over. Jan Frylinck broke the opening partnership at 86 as Sharma skied a cross-bat slog to keeper Zane Green. After Sharma’s dismissal, Rahul was at his elegant best with wristy flick and clean loft boundaries.

Suryakumar Yadav, promoted to number three, creamed a flurry of boundaries, with a loft over extra cover and scoop over fine leg standing out as India inched closer to the target. Rahul reached his third half-century of the tournament with a single to long-on before finishing off the chase with a four through long-off.

Earlier, Namibia had a brisk start with 31 runs in four overs. Jasprit Bumrah made the first breakthrough for India as van Lingen mistimed a bouncer to mid-off. In the next over, Jadeja had Craig Williams stumped for a four-ball duck. Jadeja returned in the eighth over to trap Stephan Baard lbw while going for a sweep. Baard went for the DRS but it showed the ball crashing towards the top of the middle and leg stump.

Ashwin took a wicket on his first ball of the match as Jan Nicol Loftie-Eaton edged straight to first slip. Though Gerhard Erasmus and Wiese struck a boundary each off Rahul Chahar, Ashwin returned to take out Erasmus, with the outer edge snapped by keeper Rishabh Pant. Wiese and JJ Smit continued to take Chahar for boundaries.

But Jadeja took out Smit on the last ball of the middle overs phase, with Rohit Sharma taking a forward diving catch at cover. In the next over, Ashwin beat Green’s defence to hit the top of the middle stump. Jasprit Bumrah’s slower accounted for Wiese in the 19th over, applying brakes on a possible finishing flourish. Trumpelmann smashed a six and four on consecutive deliveries in the final over off Mohammed Shami to take Namibia past the 130-mark, which wasn’t enough.