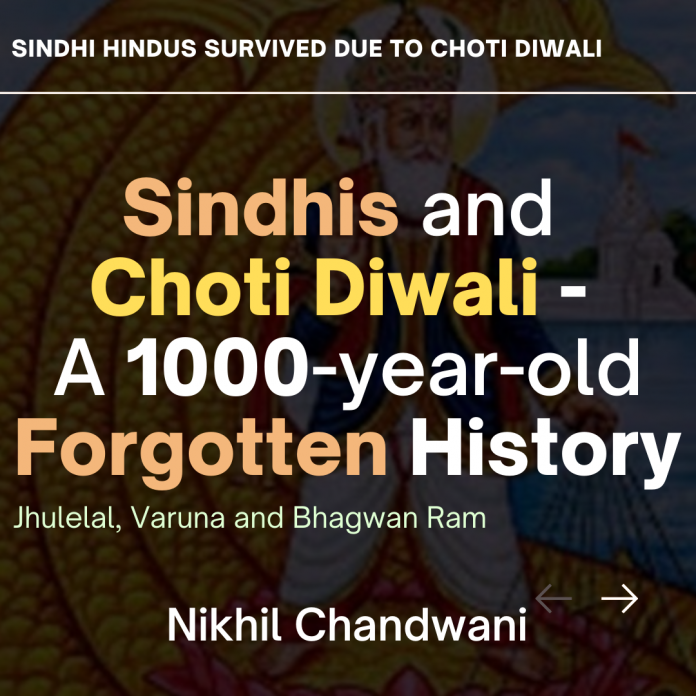 Hindus in Sindh underwent 1000 years of invasion and genocide, yet they could survive and thrive. We were able to retain some of our cultures, language, and religion due to the curse of Choti Diwali. According to oral history, we survived due to a warning to the invader from Varuna Devata on Choti Diwali that not many people know about. Let’s explore.

Bhagwan Varuna, in Hinduism, is the god of oceans, his vehicle is a Makara (crocodile), and his weapon is a Pasha (noose, rope loop).

Bhagwan Ram had a brief but path-creating interaction with Varuna in Ramayana. When Rama was faced with the dilemma of how to cross the ocean to Sri Lanka, where his abducted wife Mata Sita is held captive by Ravana, Rama (an Avatar of Vishnu) performed a pravpavesha (prayer, Tapasya) to Varun for three days and three nights. Varun Devata soon appeared and assured Rama that he would facilitate the construction of a bridge across the ocean. He also informed Bhagwan Rama about the curse on Nala and Nila, which could turn into a boon for his army.

Thousands and thousands of years after Ramayana, Varun Devata was born again – reincarnated as we Hindus call it. This time as Jhulelal.

Sindh came to be ruled by the Sumras in the tenth century. Sindh was one of the most prosperous regions under the rule of the Sumras. There were tremendous advances in Education, Healthcare, and even Sanitation. The entire kingdom was peaceful with unity and harmony.

However, an invading Islamic tyrant named Mirk Shah threatened Sindhi Hindus to either convert to Islam or face death. This was the beginning of forced conversion of Hindus by Islamic invaders. Sindhi Hindus prayed to the Water God for help. They fasted, prayed, and sang devotional songs in praise of God Varuna. Their prayers were answered after 40 days. The water god promised them that a divine child would be born in Nasarpur who would save them from the tortures of Mirkshah.

The divine child took birth in the womb of Mata Devaki in the family of Rattan Rao Luhana of Nasarpur as “Uderolal. “In Sanskrit, ‘Udero’ means the one who has sprung from the waters. It is believed that the child was an incarnation of Bhagwan Varuna. This child was later known as Saint Jhulelal as saviour God of Sindhi Hindus. Jhulelal transformed into a warrior and an older man who preached and reprimanded Mirkhshah that Hindus deserve the same religious freedoms.

Jhulelal cursed the invaders that if any Sindhi Hindu is harmed in the Sindhu Kingdom, the Sindhu river from where Jhulelal was born will flood and destroy the towns that killed Hindus. People who murder Hindus will face the wrath of the Sindhu River one day before Diwali.

It was said that since then, Diwali became a nightmare for invaders, as one day before Diwali (on Choti Diwali), the Sindh river would change course and destroy the kingdoms that attacked Hindus. This is one of the reasons why Hindus in Sindh survived the middle ages, as the invaders were scared of harming the invaders because of the curse.

This history lesson has been a part of oral history for many Hindu-Sindhi generations. Sadly, not many people know about it.

Choti Diwali is the most auspicious day for Sindhi Hindus. Our culture and our civilization survived because Bhagwan Varuna’s incarnation #Jhulelal flooded everyone who tried to attack us. This punishment on invaders was carried out one day before Diwali, Choti Diwali, which is celebrated today.

Sadly, not many know the significance of this day until now, and I hope you all take a moment to thank the god of seas for saving us.