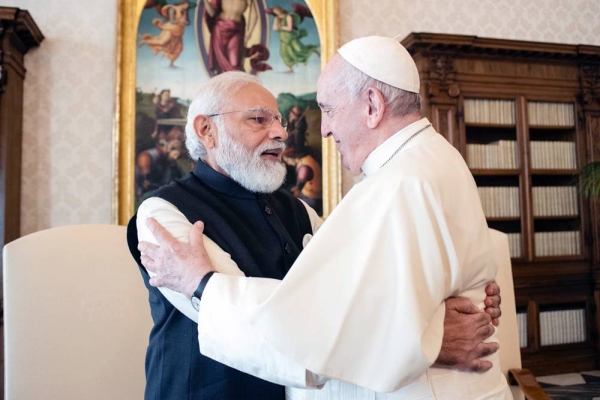 Narendra Modi became the first Indian Prime Minister to meet Francis since he became the Pope in 2013. On Saturday, Modi called on the Pope at the Vatican and discussed with him issues covering a range of areas of interest, including COVID-19, general global perspectives, fighting poverty and making the planet a better place.

It is the first-ever one-to-one meeting between Prime Minister Modi and Pope Francis, the head of the Catholic Church. At the Vatican, Modi was accompanied by National Security Advisor Ajit Doval and External Affairs Minister S. Jaishankar. The Prime Minister also met Cardinal Pietro Parolin, secretary of state of the Vatican City State.

According to PTI, sources said that the meeting between PM Modi and Pope Francis that was scheduled only for 20 minutes went on for an hour. The PM also invited the Pope to visit India.

“Had a very warm meeting with Pope Francis. I had the opportunity to discuss a wide range of issues with him and also invited him to visit India,” said a tweet from PM Modi’s personal account.

“It may be recalled that the last Papal Visit happened in 1999 when Atal Bihari Vajpayee was the prime minister and Pope John Paul II came to India. Now it is during PM Modi’s Prime Ministerial term that the Pope has been invited to visit India,” sources said.

The meeting took place ahead of the delegation-level talks during which they are expected to discuss a range of issues such as COVID-19. Modi is on a two-day visit to Rome for the G20 Summit at the invitation of Italian Prime Minister Mario Draghi.

There was no set agenda for the talks with the Pope. “I believe tradition is not to have an agenda when you discuss issues with His Holiness. And I think we respect that. I’m sure the issues that will be covered would cover a range of areas of interests in terms of the general global perspectives and issues that are important to all of us,” Foreign Secretary Harsh Vardhan Shringla had said Friday.

Modi will then head to Glasgow in the UK for the COP26 meeting at the invitation of British Prime Minister Boris Johnson. The Prime Minister interacted with people of various communities, including the Indian community and friends of India from different organizations, in the Italian capital on Friday.

Earlier, Modi had paid floral tributes at the bust of Mahatma Gandhi in Rome.

The PM arrived in Italy on Friday to participate in the two-day G20 Summit. This summit will be the eighth G20 Summit attended by Modi.