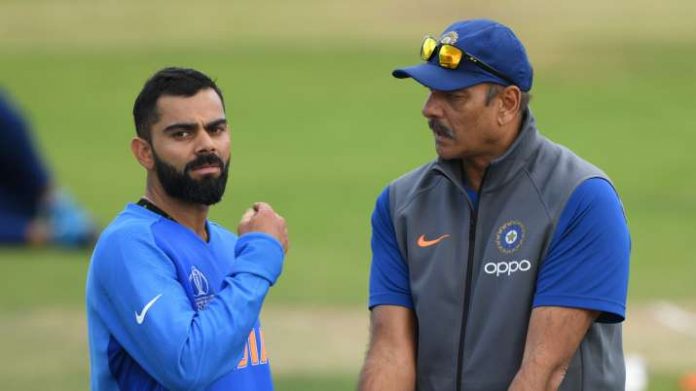 Former India head coach Ravi Shastri has said Virat Kohli might give up captaincy in other formats in the near future after doing so in the T20Is to deal with mental fatigue and focus on his batting.

Shastri’s tenure as head coach ended on a bittersweet note as India finished their T20 World Cup campaign with three emphatic victories but failed to make the semi-final of the showpiece event in the UAE. On the other hand, Kohli, who has stepped down as T20I captain, has taken rest for the T20 series and one Test against New Zealand to manage his workload.

Speaking to India Today, the former India captain talked about Kohli’s workload in the future.

“In red ball cricket, India have been the No. 1 team in the world for the last five years under Virat Kohli. So unless he wants to give up or if he is mentally fatigued and says he wants to focus on his batting — which can happen in the near future, don’t think it will happen immediately — it can happen,” Shastri told India Today.

“The same might happen with the ODI. He might say he wants to focus just on Test captaincy. It is his mind and body that will make that decision. He won’t be the first, there are many players in the past who have had very successful tenures and captains and then given it up to focus on batting,” he added.

The former coach also mentioned that Kohli remains the fittest cricketer in the team and he is also hungry to do well.

“He is hungry for sure, fitter than anybody in the team. No doubt about that. When you are physically fit, your longevity only increases. On the captaincy part of it, it will be his decision but I see if anything he might say no to white-ball cricket but the red ball, he should carry on because he has been the best ambassador for test cricket. That will make him carry on,” he said.

Shastri also admitted that India’s inability to win an ICC trophy during his 4-year tenure was a disappointment but he doesn’t regret anything. He added that the India cricket team transformed into a steely side during his helm, which is more important for him.

“It is a disappointment, not regret. We could have won, if not one, then maybe two tournaments but such things happen. In white-ball cricket, things change very quickly. If you don’t start well you could be behind very quickly like it happened in this World Cup,” he said.

“But let me tell you something, that is silverware. We have enough silverware if I have too much of it, it’s a problem polishing it after a few years when I get a little older. But for me, steel is more important and what we have done with this team is to infuse steel. You can ask anyone around the world, actually which is the best team. They will say it is the Indian cricket team across formats,” he added.

India won their first-ever Test series in Australia in 2019 under the Shastri-Kohli leadership group while they repeated the feat in 2021, breaching Australia’s fortress at Gabba. Shastri was in charge of the dressing room even as Ajinkya Rahane led the team to a memorable victory.

India lost the ICC World Test Championship final earlier this year but they bounced back to lead England 2-1 in an incomplete Test series.

“The highs, it has to be Australia, just cannot take that away. Back-to-back wins in Australia after almost 70 years is something that was unimaginable. Makes it extremely special. And of course, leading the series in England,” Shastri said.