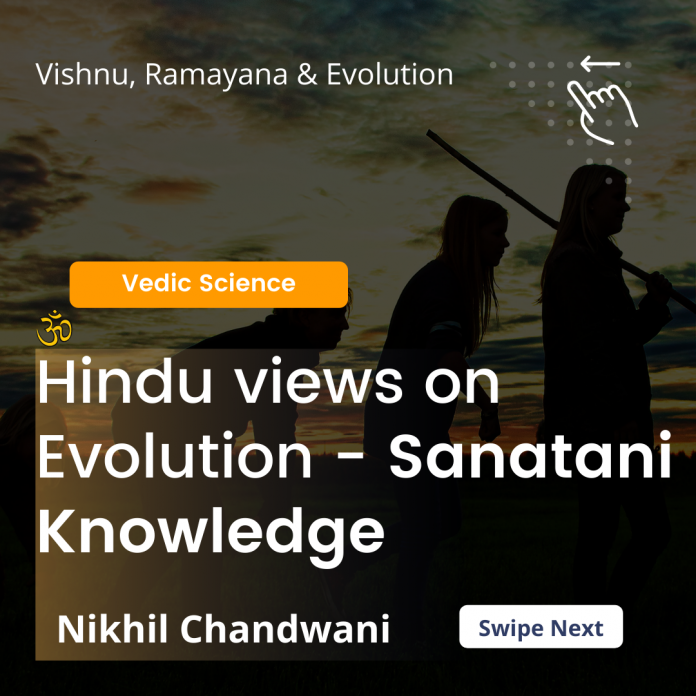 Evolution is the change in the heritable characteristics of biological populations over successive generations. These characteristics are the expressions of genes that are passed on from parent to offspring during reproduction. Different features tend to exist within any given population due to mutation, genetic recombination, and other sources of genetic variation. According to science, the scientific theory of evolution by natural selection was conceived by Charles Darwin.

Existing patterns of biodiversity have been shaped by repeated formations of new species (speciation), changes within species (anagenesis) and loss of species (extinction) throughout the evolutionary history of life on Earth. Morphological and biochemical traits are more similar among species that share a more recent common ancestor, and can be used to reconstruct phylogenetic trees.

However, Long before Darwin’s theory, numerous concepts of evolution were already covered in Vedas. Let’s explore how Hinduism describes evolution & its relationship with modern science.

The incarnations of Vishnu start with a fish. Vishnu knew about Shiva’s plan to cause massive floods. Therefore, he incarnated in the form of Matsya (a fish). This was documented thousands of years ago. Surprisingly, this is the same as Darwin’s theory of life that says life started in water. Vishnu Bhagan’s second avatar is a tortoise (Kurma Avtaar). It is an amphibian, right? Same as what Darwin stated. Darwin stated that the constant struggle between fishes led to the development of amphibian life. Vishnu Bhagan’s third avatar was Varaha (a pig). A pig is a terrestrial animal.

The idea of ape-men is not something that was invented by Darwinists of the nineteenth century. Long before that, the ancient Sanskrit writings spoke of creatures with human-like intelligence, apelike bodies, and a low level of material culture. The Ramayana speaks of the Vanaras, a species of apelike men that existed millions of years ago. This is NO coincidence. Pre-Historic India knew evolution, and they documented it long before anyone else did.