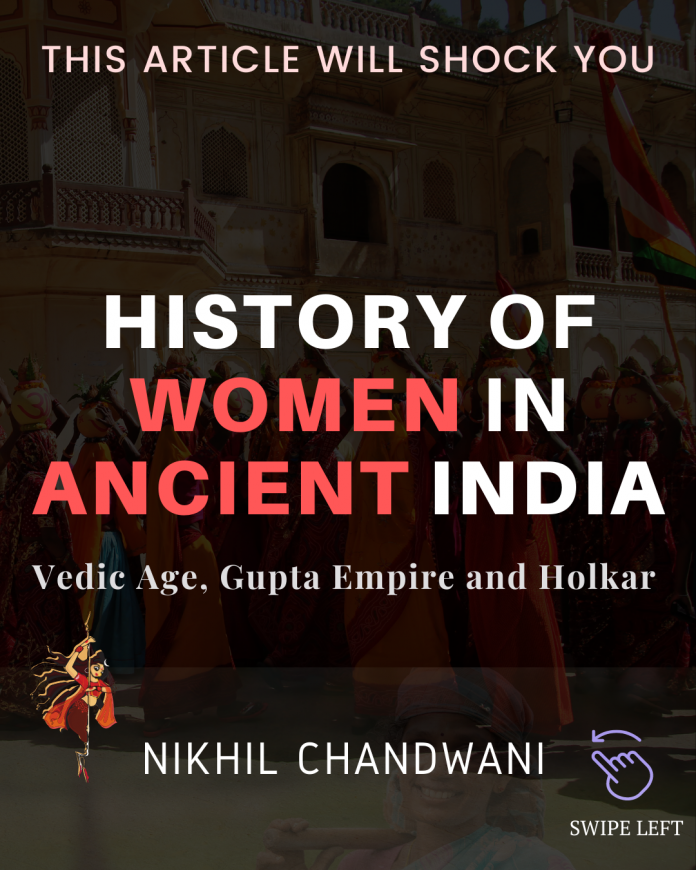 The success of any empire, as per historical observation, has always depended on the way its residents treat women. Thousands of different faiths have come and gone in the history of human civilization, but Hinduism has outlived everything else. Why? Because in Sanatan Dharma, God is a woman. Today, let’s explore the history of women in Ancient India. This article is strictly evidence (and not emotion) based, and I can share citations on request.

Around three thousand years ago, when half the world had occupations divided between men and women, the Indian girls enjoyed a high status with men in all life aspects. During the Vedic Period, equality was impeccable. Works by ancient Indian Rishis such as Katyayana and Patanjali suggest that women were educated in the early Vedic period. Rig Vedic verses prove that women married at a mature age and were free to select their own husbands in a practice called Swayamvar. Yes, there was no child marriage during the Vedic Age, and women were free to pick their husbands.

In the Puranas, the recorded history showed every God in a consort of their wives (Vishnu with Lakshmi, Brahma with Saraswathi, and Shiva with Parvati). Moortis of God and goddesses were depicted with importance to both genders. Separate temples were set up for goddesses, and within each temple, goddesses were worshipped and treated with as much care, and devotion as the gods were. There are also particular practices that exist to this day in terms of preference of worship.

Even in the practice of Homa (ritual involving fire, and offerings to fire), every mantra or Shloka is addressed to Swaha, the wife of Agni, instead of Agni himself.

Devi Bhagavata Purana: 9.43, says that all requests to Agni had to be made through his wife only:

“O Mata, Let yourself become the burning power of fire; who is not able to burn anything without thee. At the conclusion of any mantra, whoever taking thy name (Svaha), will pour oblations in the fire; he will cause those offerings to go directly to the gods. Mother, let yourself, the repository of all prosperity, reign over as the lady of his (fire’s) house.”

History has not been kind to the Indian subcontinent. Sadly, not many things have been perfectly preserved from the Prehistoric Era. However, what we do know is, in the 6th or 5th century BCE, Queen Mṛgāvatī (in Sanskrit), the Vatsa mahajanapada ruled as regent, and she earned “the admiration of even experienced ministers. She was the world’s first woman ever to rule a kingdom. In Chanakya’s Arthashastra, he states that it is difficult to understand women but not impossible. It’s not hard to love Chanakya, I know. 😀

In the Gupta era, instances are not rare of women participating in an administrative job. Chandragupta I, patron of the Gupta Empire, managed the kingdom jointly with his queen Kumara Devi. In the work called Amarkosh, written in the Gupta era, names of the teachers and professors are there, and most of them are women.

Rudrama Devi was a queen of the Kakatiya dynasty in the Deccan Plateau with capital at Warangal of present-day Telangana from 1263 until her demise. She was one of the few women to rule as monarch in the Indian subcontinent. The position of Indian women in society deteriorated after the desert-cult invasion. The invaders brought regressive and backward thinking with them. Still, Devi Ahilya Bai Holkar, a fearless woman, fought numerous invasion attempts in the 18th Century and built hundreds of temples throughout India.