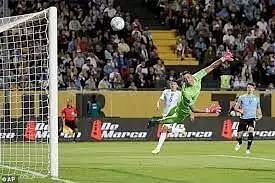 Angel Di Maria struck a sublime first-half goal as Argentina edged closer to securing a place at the 2022 FIFA World Cup with a 1-0 victory over Uruguay here.

The visitors took the lead in the seventh minute at Montevideo’s Campeon del Sigo stadium when Paulo Dybala forced a turnover and then found Di Maria just inside the penalty area on Friday night.

The Paris Saint-Germain forward took one touch before firing an inch-perfect shot from an acute angle into the far corner.

Uruguay responded by showing greater urgency, driving forward in numbers against an Albiceleste side that seemed content to sit back, Xinhua reports. The Celeste continued to press after halftime with Luis Suarez and Augustin Alvarez threatening to equalise on several occasions. But they were unable to find a way past goalkeeper Emiliano Martinez, who made a series of impressive saves.

Argentina captain Lionel Messi, who has recently recovered from knee and hamstring injuries, was introduced as a 76th minute replacement for Giovani Lo Celso. The 34-year-old had a little impact as Argentina barely ventured forward in the closing stages in a bid to protect their lead.

The result leaves Argentina with 28 points from 12 outings, six points behind leaders Brazil with both teams having seven South American zone qualifiers remaining.

Uruguay, who have lost their past three qualifiers, dropped to sixth, 12 points further back.

The top four teams will earn a World Cup spot while the fifth-ranked side will advance to an intercontinental playoff.

Argentina’s next match is a home duel against Brazil on Tuesday in San Juan while Uruguay will meet Bolivia in La Paz on the same day.

Meanwhile, central midfielder Edenilson has been called up to Brazil’s squad for the World Cup qualifier against Argentina, the Brazilian Football Confederation (CBF) said on Friday evening.

The 31-year-old replaces Real Madrid’s Casemiro who is suspended for the clash due to an accumulation of yellow cards.

Edenilson, who plays for Internacional in Brazil’s Serie A, has been capped twice for Brazil, having made his international debut against Peru in September.

Brazil will travel to Argentina on Monday and will meet the Albiceleste in the central-western city of San Juan the following day.